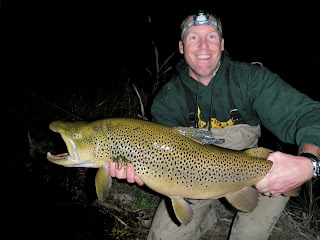 There have been some monstrous trout caught at Silver Creek Preserve this summer. Our Central Idaho conservation manager, Mark Davidson, shows a picture of one he recently caught--a 28.5 inch fish that he estimates could weigh 10 pounds.

It's not exactly a secret what prey these large, predatory fish are gobbling...

We've mentioned the vole population explosion several times already on this blog. It's really become a feeding frenzy at Silver Creek, and not just for the trout gobbling up rodents that fall into the water. There are huge numbers of raptors at the preserve. It's not unusual to see eight or more redtails overhead, with many more feeding or resting on fence posts and dead trees.

Voles populations are cyclical, and this year's wet spring seems to have created ideal conditions. Visit the preserve soon to see all the predatory birds. And if you fish, you may want to pack along a few mouse patterns!
Posted by TNC-Idaho at 1:07 PM 1 comment: 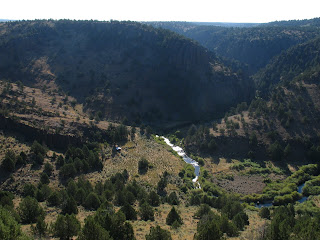 The Wilderness Land Trust and The Nature Conservancy have announced the acquisition of two properties in Owyhee County both in newly designated wilderness located adjacent to the Owyhee Backcountry Byway. Both property acquisitions will offer scenic desert canyons to public access and recreation.

The acquisitions are part of the on-going implementation of the Owyhee Initiative, a historic collaboration by local ranchers, Owyhee County, the Shoshone-Paiute Tribes, conservation groups and recreationists.

The property will be transferred to the Bureau of Land Management to become part of the North Fork Owyhee Wilderness. It is located along the largest canyon that intersects the Owyhee Backcountry Byway, on Juniper Mountain Road.

It is also adjacent to the only developed campground on the byway. The property offers spectacular rugged canyon scenery in the heart of the Owyhees and over a mile of the North Fork Owyhee River for fishing, hiking and habitat protection.

Read more about these properties that will offer access to wilderness directly off the Owyhee Backcountry Byway.
Posted by TNC-Idaho at 11:02 AM No comments: 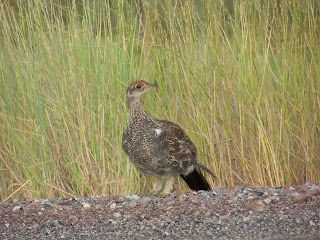 Mention Idaho wildlife migrations, and most think of animals "escaping winter": the southern flights of birds in the fall, mule deer and elk moving out of the high country into the mild valleys, bald eagles abandoning frozen lakes for open rivers.

This isn't the case for the dusky grouse (Dendragapus obscurus) : This large bird spends the summers in low-elevation foothills, and then migrates into the deep snow of coniferous forests in the winter.

In the summer and early fall, it feeds on seeds, berries and small insects. In the winter, its diet is almost exclusively pine needles.

Now is obviously an easier time to see these birds, the third largest grouse in North America (after the two sage grouse species). They can be seen in low-elevation foothills like the Boise Front and the Bennett Mountains near Mountain Home (where this one was photographed), or in valley areas in Idaho's national forests.

There is some anecdotal evidence that dusky grouse are in decline in some regions. But more research is needed. Now is the time to determine if there are long-term declines. Once a population becomes endangered, recovery is much more difficult.

By the way, the name "dusky grouse" may be unfamiliar, as most know this bird as the "blue grouse." Recently, the blue grouse was split into two species--the "sooty grouse" of coastal regions and the "dusky grouse" that is found in the Intermountain West, including Idaho.
Posted by TNC-Idaho at 2:05 PM No comments: 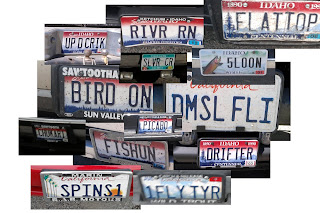 Silver Creek intern Dominique Lucio put together this collage of license plates he saw on the preserve this summer. It's obvious that our visitors love their fish and birds--and the preserve!

If you have other photos of creative nature- and outdoors-related license plates, let us know, and we'll post them on the blog. 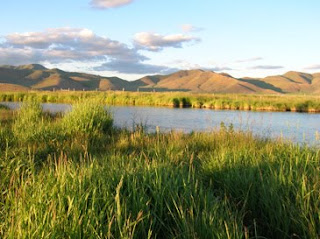 The tricos are finally here!

A little late and a little odd, but this summer has not been typical as far as weather. The late afternoon thunderstorms have mixed things up and many people have given the mice patterns (or vole patterns!) late at night a try-- the brown trout are definitely getting fat this year. With a late or mid afternoon wind, grasshoppers are a sure thing.

The preserve has not seen many visitors the past two weeks, so your luck may be increased with the low traffic. 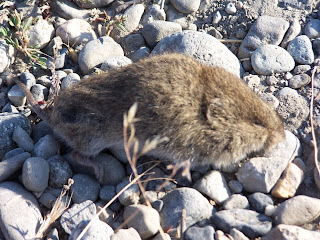 Vole Update: We've covered these little rodents quite a bit this summer. The Idaho Statesman has another interesting bit of info about this year's vole explosion. It turns out that not only are voles feeding many species from trout to raptors, they're also reducing the amount of grasses in sagebrush country--leading to a decrease in size and frequency of fires. Way to go, voles!
Posted by TNC-Idaho at 9:28 AM No comments: 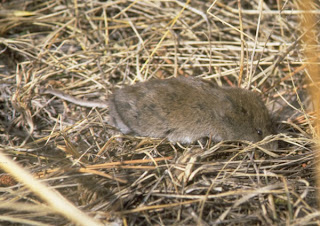 As the Idaho Mountain Express reported last week, much of southern Idaho is experiencing a vole population explosion this summer.

Montane voles are small but stocky rodents that live in large colonies. You might see them scurrying across the road or trail. Or you might notice their well-developed trails through sagebrush, meadows and agricultural fields.

Some reports point to this vole abundance as a sign of nature "out of balance," an assertion that is not correct.

Voles populations are cyclic, and at times the little animals exist in staggering numbers.

And wherever there are large numbers of prey animals, there will be a lot of predators taking advantage of the situation. Whether it's wildebeest in the Serengeti, mayflies on a spring creek, or snowshoe hares in the Arctic, huge masses of prey invite a feeding frenzy.

Visit Silver Creek in the evening and note the high numbers of owls around. It would be interesting to know if the owls have more young, or raise young more succesfully, in years of peak vole abundance. In Alaska, lemming population booms mean more breeding by snowy owls and short-tailed weasels. Perhaps voles--which are similar to lemmings--affect Idaho predators' survival and breeding success.

The concept of the "balance of nature" makes a good story, but it's never really been accurate. Nature sometimes appears, to human eyes, to be wildly out of balance. But huge population outbreaks are not necessarily plagues or natural disasters; instead, they're merely part of a natural cycle of prey and predator.

This summer, keep an eye out for voles and the many animals that eat them. It may be a while before we ever see this many again.
Posted by TNC-Idaho at 3:20 PM 1 comment: 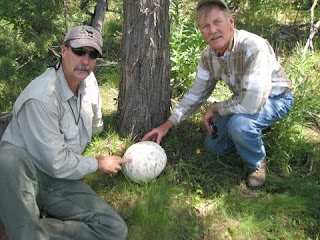 On a recent trip into the Owyhees, the Conservancy's director of science, Bob Unnasch (left) and director of stewardship, Art Talsma (right) located this giant puffball--the largest either had ever seen. 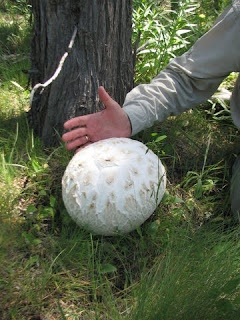 It's an impressive example of a common and widespread group of fungi species.
Puffballs consist of a number of groups of fungi, with the notable feature being that they produce their spores internally. The puffballs eventually dry up and split, whereupon their spores are released into the breeze.
This is what gives them their name. Anyone who has stepped on a dried puffball is familiar with the "puff" of spores that explodes from the puffball--almost like smoke.
This particular puffball will no doubt emit a large cloud of spore "smoke." In the meantime, though, it looks pretty good modeling a Nature Conservancy hat... 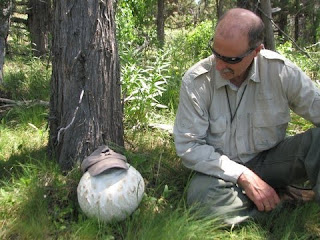 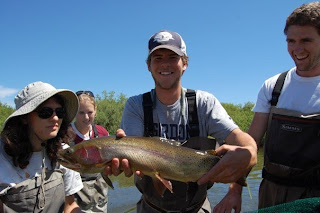 To start the week, here are two big fish photos from our Idaho preserves. The above photo was taken at Flat Ranch Preserve, on the headwaters of the Henry's Fork in Macks Inn.

The Henry's Fork Foundation recently conducted an electro-shocking survey of a stretch of the preserve's waters where a habitat restoration project was recently completed. The 24-inch Yellowstone cutthroat is one of the fish they caught and released during the survey.

The Henry's Fork Outlet that runs through Flat Ranch is not very big water. Most would not guess it holds fish like this.

The Yellowstone cutthroat is the native fish of these waters, and is imperiled due to the usual enemies of native trout: loss of habitat and competition from non-native fishes. It's great so see these fish still surviving on the Flat Ranch. The habitat restoration offers a hopeful future for these beautiful fish. 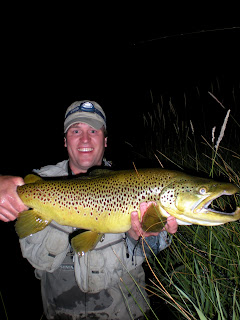 And here's a fish caught--by fly fishing, not electro-shocking--by the Conservancy's East Idaho conservation manager, Chet Work, on Silver Creek Preserve.
Chet recently accepted the position of executive director for the Teton Regional Land Trust, so we like to think of this as his going-away present.
Words like "passion" and "obsession" don't quite capture Chet's enthusiasm for fishing. This is someone who, quite literally, sets hooks in his sleep. He has spent some late nights chasing the monster browns of Silver Creek.
And while he's not saying what fly caught the trout, another recent Silver Creek blog post might hold a clue.
Having snorkeled much of the preserve last week, I can also assure you that I saw plenty of other behemoth trout--including a few that could pass for this one's "big brother"--swimming the waters.
They're out there, lurking beneath the surface. We'd love to see your photos if you have any luck.
In the meantime, we'd like to again take this opportunity to thank Chet for his five outstanding years with the Conservancy, and wish him the best as he continues to work towards protecting Idaho's most special places.
Cutthroat trout photo by Flat Ranch Preserve intern Bryan Kloster.
Posted by TNC-Idaho at 1:45 PM No comments: