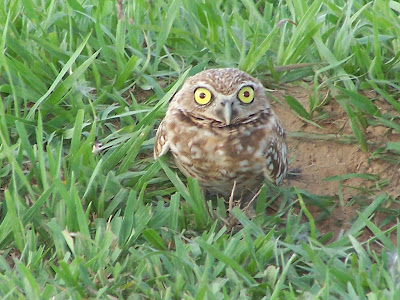 It's hard to deny: Burrowing owls are cool.

And while that might not be objective, how else to describe a soda pop can-sized owl that lives underground?

Katie and others have studied these owls at the Morley Nelson Snake River Birds of Prey National Conservation Area for years by building artificial dens and conducting extensive research on nesting success, diet and owl habits.

The Snake River area has one of the highest densities of burrowing owls in the country, creating an excellent environment to learn more about these curious creatures.

The owls have very interesting habits. They move into abandoned holes dug by badgers and other mammals, and hatch large broods of chicks (one in the area hatched 16).

They feed on a variety of smaller critters, including mice, voles, scorpions, grasshoppers and small snakes. They catch as much as they can and deposit an extra prey underground in a cache, to be eaten when the hunting isn't as good.

Owls may be doing well in Idaho, but lots of owls are living near agricultural fields which raises some conservation concerns. Can they thrive alongside agriculture? Does this expose them to new dangers? What if those farms are developed? These are all questions being explored by the researchers.

About 95% of Idaho's burrowing owls migrate, most likely to southern California, for the winter. Some are already showing back up at the Birds of Prey area, according to local birders.

They are found in grassland areas of the United States as well as Central and South America.

In fact, I took these photos on the expansive Llanos grasslands of Colombia, where the owls were amazingly abundant. Riding horseback across the plains, it was not unusual to encounter dozens of them. Every time I encountered them they made me smile--with their big eyes and curious look.

Unlike almost all other owls, burrowing owls are active during the day. So keep your eye out in southern Idaho this spring: you might just be rewarded with a sighting of this interesting little bird.--Matt Miller 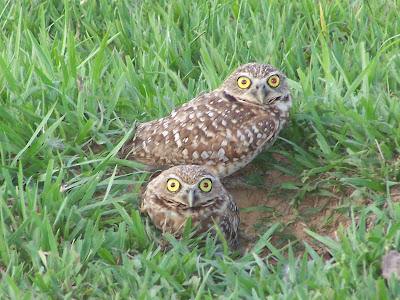 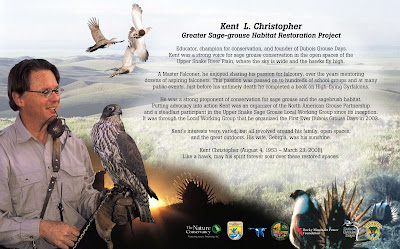 Sagebrush country has long been considered under-appreciated: After all, many drive through southern Idaho at 80 mph and see nothing but a barren, empty land.

Kent Christopher knew better, and wanted to show others the wild side of this open land: dancing grouse, beautiful wildflowers, racing pronghorns, the opportunity for incredible outdoor adventures.

A new memorial (above) at Camas National Wildlife Refuge will remember Kent's many contributions to sage grouse and sagebrush habitat conservation. (Click on the image for a larger version).

Kent was a passionate falconer, conservationist, educator, poet and photographer. His connection to the land was formed by flying his gyrfalcons on sage grouse, but he loved it all: the birds, the ranches, the country.

Kent worked closely with The Nature Conservancy at Crooked Creek Preserve, and created the first-ever Dubois Grouse Days, an event that offers tours to see sage grouse on their spring breeding grounds (called leks). The event has become tremendously popular and is a great way to see this natural spectacle in all its glory.

This year's Grouse Days will be April 16 and 17. Kent's memorial will be dedicated during the event.

Kent was tragically killed in a ski accident in March 2008, much too soon. We need more like him. In eastern Idaho, his legacy lives on. Long may his work serve as an inspiration to the falconers, birders and conservationists continuing the hard work of protecting and restoring sage grouse and sagebrush.
Posted by TNC-Idaho at 9:43 AM No comments: 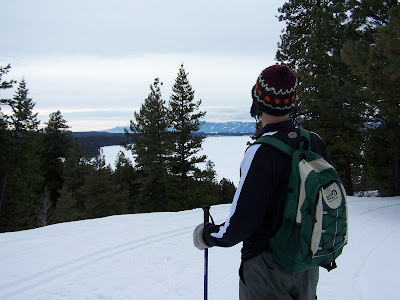 That's why we're happy to see a strong grassroots effort forming by those who love our parks: the Friends of Idaho State Parks.

The best way to get involved right now is by becoming a Facebook fan of Friends of Idaho State Parks. The Facebook page contains a lot of great information on how to help and how you can best be an advocate for our parks.

Become a fan today and show your support! 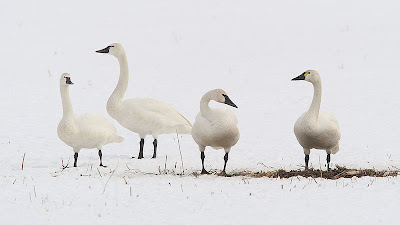 The tundra swans have really been showing around Idaho in the past week. They'll stop for a bit before heading north to their breeding grounds on the Arctic and sub-arctic tundra.

The calm waters provided by wetlands offer an excellent pit stop before continuing on a long journey.

While the tundra swan population is estimated at 170,000 birds, they seem to be in a slow decline in the western United States.

Polluted water--which causes declines in the aquatic vegetation on which they feed--is suspected as a major culprit in the decline.

If you want to see swans in Idaho, here are some suggestions:

Photos by mdw under a GNU Free Documentation License.
Posted by TNC-Idaho at 11:42 AM 4 comments: 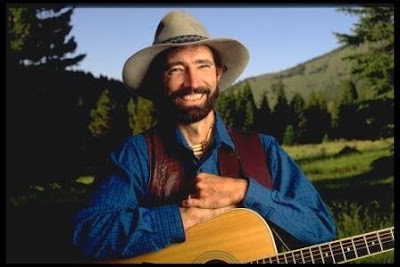 The Nature Conservancy presents Walkin’ Jim Stoltz, one of America’s most unique folk singers and backcountry travelers, at 7:30 pm Tuesday, March 16 at the Colonial Theatre in Idaho Falls.

The mix of stunning photography, stories, and music make this one-of-a-kind concert an inspiring journey into our nation’s last wilderness areas.

Walkin' Jim gets his name from nearly 27,000 miles he has walked through the wild country of North America. Carrying a guitar and writing his songs along the way, his lyrics express a great love and respect for the Earth and the wild places he knows so well. 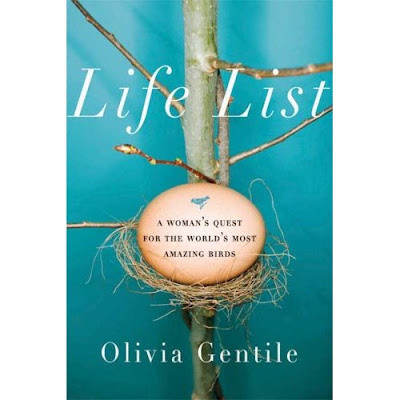 I love identifying and observing birds, but I admit that I've never been interested in competitive listing--ticking off bird species seen for the purposes of amassing a long "life list." In its most extreme forms, listing seems to reduce the beauty of birds to mere tokens to be collected, while ignoring their habits and the stunning places they inhabit.

Most birds about competitive listing similarly leave me cold; these stories too seem more about numbers than birds.

But not this one: Olivia Gentile's Life List is a compelling portrait of Phoebe Snetsinger, a woman who took to birding to escape a life she considered mundane, and from there became the first person to see 8000 of the world's bird species.

Snetsinger makes a fascinating character. As a young woman in the '50s she aspired to be a scientist, but instead fell into the expected roles of housewife and mother. She turned to birding as an escape, becoming ever more passionate about recording birds she'd seen.

In 1981, at the age of 49, diagnosed with cancer and given a year to live, Snetsinger set out on a string of international birding tours to see as many species as she could before she died. She lived another 18 years--and in that time accumulated a life list larger than any other birder.

Gentile presents a complex story of a complex individual. It's hard to not admire Snetsinger, a woman who at times braves terrible conditions and rugged travel to add a few birds to her list. But the other side of obsession is also here: the toll on her husband and children, the increasingly competitive nature of her birding, the neglect of her mental health following a horrific assault on a birding trip in New Guinea.

Best of all, Gentile also captures the genuine thrills of seeing new birds in their habitat. This ultimately, is not a story about numbers, but of birds--and the great places birds can take us. 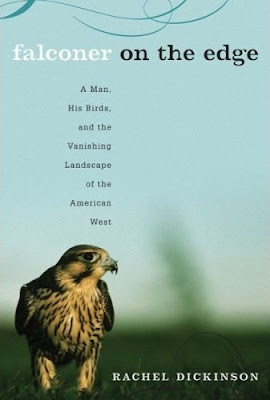 Falconers have their own breed of feathered obsession. The art of hunting game with trained birds of prey is an ancient pastime, and given the inherent difficulties of training a raptor coupled with the strict regulations and apprenticeship process, it's nearly impossible to be a casual falconer.

Rachel Dickinson's Falconer on the Edge is her attempt to understand what drives falconers in their passion. Married to falconer Tim Gallagher--the writer and naturalist who rediscovered the ivory-billed woodpecker--she decided to learn about her husband's passion by spending time with one of the sport's most fanatic devotees.

Steve Chindgren flies his falcons on sage grouse at least five days a week in the autumn and winter near his cabin in Wyoming. Sage grouse hawking is considered one of the most beautiful and difficult forms of falconry.

In her book, Dickinson captures the many elements that add up to make a falconer--the raptors, of course, but also the sage grouse, the land, the regulations, the camaraderie.

As any book involving sage grouse today must be, it's also about conservation--especially as so many of Chindgren's hawking grounds are overtaken by energy development on Wyoming's sagebrush country.

Falconers have a long history of conservation, including the highly successful restoration of peregrine falcon populations. They pursue conservation with the same obsessive nature as they do hunting.

Falconers have already become heavily involved in sage grouse conservation, in places like Idaho's Crooked Creek. We'll continue to need their help as we work to stem the decline of sage grouse populations.

Obsession can mean many things, not all of them positive. But a close connection with the natural world--be it through birding or falconry or another activity--inarguably also makes the strongest conservationists. --Matt Miller
Posted by TNC-Idaho at 12:26 PM No comments: 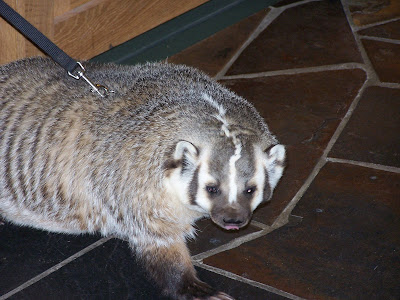 Badger posts always generate a lot of interest on this blog, so I thought I'd share this unusual photo of a badger on a leash.

No, it's not a pet, but a rescued badger at the High Desert Museum near Bend, Oregon.

Badgers are common in sagebrush country, but can be difficult to find. I recently hosted a naturalist trying to see all the world's mammals who came to Idaho to try to see a wild American badger. He has seen pandas and clouded leopards and all manner of rare and elusive animals, but no American badger. He finally found one at the Snake River Birds of Prey Conservation Area--but it took a lot of patience, careful searching and spotlighting.

Idaho has the highest density of badgers on earth. Still, most kids won't see one unless they're lucky. The badger at the High Desert Museum offers an up-close look at this cool mammal. Hopefully it can instill curiosity and interest in badgers, and their sagebrush home.

Watch a video about the museum's badger.
Posted by TNC-Idaho at 2:05 PM 2 comments: