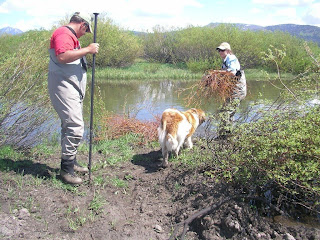 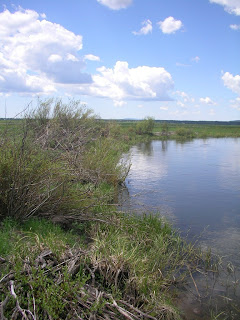 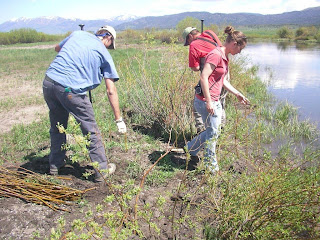 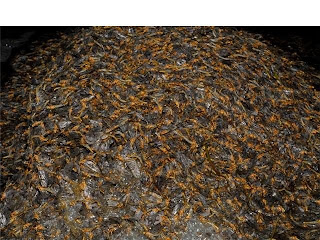 The brown drake hatch may have been a little late this year, but lucky anglers still experienced quite a show. Silver Creek intern Ryan Urie took this photo of an incredibly large mass of brown drake mayflies in the water. You can click on the photo for a closer look.

Studies on the Black Canyon of the Gunnison have shown that trout there can get as much as 75 percent of the annual caloric intake during the two-week salmon fly (a stonefly species) hatch. I wonder how important the brown drakes are to trout on lower Silver Creek.

Of course, Silver Creek has tremendous hatches throughout the year. The brown drakes may be long gone, but the tricos are here. Of course, the tricos are much tinier, and more difficult to fish. But spring creek mayfly hatches are one of nature's great spectacles, even if you don't fish. The sheer numbers of these beautiful insects is unbelievable, sometimes covering the surface of the water as this photo shows. You can take a closer look at Silver Creek--including birding walks, a canoe tour, a scavenger hunt and a barbecue--this Saturday, July 26, from 8 a.m. to 1 p.m. Email the Silver Creek Office to register. --Matt Miller
Posted by TNC-Idaho at 9:05 AM No comments: 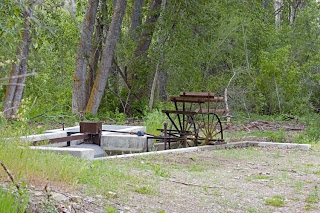 What happens when a salmon swims into an irrigation diversion?

Nothing good. By the time the fish figures out it made a wrong turn in the stream, there’s not enough water to turn back, and it’s trapped—meaning certain death.

At least that’s how it used to be.

The contraption pictured above is installed on small streams to protect chinook salmon (and other fish) that swim down small stream diversions. Conservationists in the Salmon River Valleys recognize that small streams are vitally important to the remaining salmon and steelhead, but these streams are often overlooked as salmon habitat.

These little streams may not look like much at first glance, but salmon are not only a fish of large waters. After their long migration from the sea, it seems a shame for fish to be lost on the final part of their journey. Fish spawn in remarkably small streams connected to rivers like the Lemhi and Pahsimeroi: 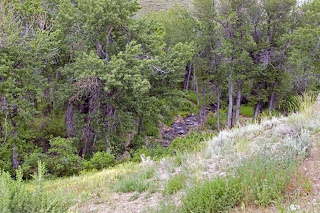 These streams are also used by spawning steelhead, and contain populations of bull trout, cutthroats and resident rainbows—provided there is enough water. As fish migrate, they sometimes go into diversion channels, which, after all, look just like a regular stream channel: 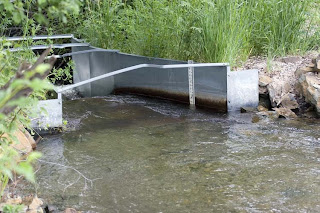 A fish excluding device saves these fish. The water wheel concept is designed to divert the fish back to their stream, while ensuring adequate water still flows for irrigation.

Here’s how it works. Larger fish find an impasable metal barrier, so they turn around and swim back to the stream. But smaller fish can still pass—a fine mesh would accumulate so much debris in a day that the device would become a dam, negating its value as a diversion.

Smaller fish thus enter the pictured device and face a fine mesh barrier tube—rotated by the water wheel so that debris does not accumulate on the mesh. 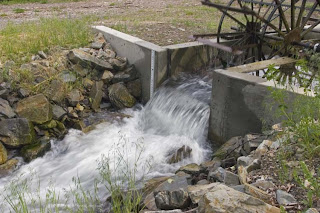 Fish that make it to the mesh could be trapped, so a PVC pipe goes the opposite direction, returning some water to the stream. (Most of the water is run through the water wheel to the irrigation canal). The fish shoot down the tube and are deposited back in their natural habitat—subject to what must be a particularly wild ride, but far better off than the alternative.

The Nature Conservancy and partners consider it one of the highest conservation priorities to protect the salmon that are left. This includes a wide range of activities, including restoring habitat along spawning streams, ensuring adequate flows in rivers and devices like this one that protect both fish and agricultural practices.—Matt Miller 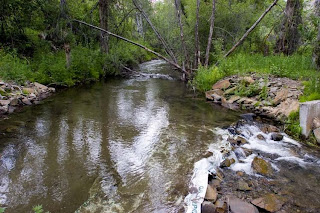 Photos by Jim Foster.
Posted by TNC-Idaho at 2:10 PM No comments: 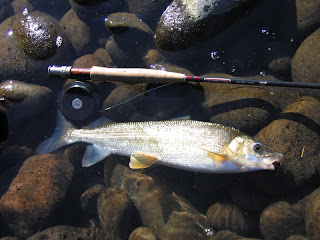 Over the July 4th weekend, I spent one leisurely afternoon casting small spinners on the Boise River just across the road from my home. After a couple of hours of fruitless fishing, a fish aggressively hit my lure.

I could tell it was a decent-sized fish, but even on my light spinning rod, I quickly reeled it in: a 15-inch mountain whitefish.

According to too many fishing books, my reaction should have been disgust. Whitefish are often regarded as a nuisance, a pest when fishing for more desirable species, or even a “trash fish.”

Which is unfortunate. Much of this contempt can be summed up by the title of E. Donnall Thomas Jr.’s fly fishing book, Whitefish Can’t Jump. While Thomas’ well-written book is actually about appreciating the diversity of fish found in North America, many other anglers view the whitefish’s tendencies not to jump or fight hard as major character flaws.

They also forage for food they disturb from the bottom, and many people have an innate dislike of "bottom feeders."

But the whitefish requires clean, cold waters and it’s a true native to our rivers. Stories of anglers catching 25- whitefish a day remain common on some rivers, but they obscure another fact: Whitefish are declining and even disappearing on many waterways.

Whitefish are native to Silver Creek, but recent fish surveys have found them to be almost, if not entirely, absent from large portions of the stream. Certainly the waters are still cold and clear, so what could be the problem? Conventional wisdom suggests the non-native brown trout, which grow huge in the creek, and become fish eaters as they grow. But more research is needed to be sure. Why can whitefish survive and even thrive in some rivers with brown trout, like the Boise, while they have largely disappeared from others? This remains as an important question for fisheries biologists to answer.

Fortunately, many anglers and outdoor enthusiasts now recognize that a river is best appreciated with its full range of native species, and that fish should be viewed on their own merits, not just their sporting qualities.

The Boise River has a thriving whitefish population, so I took mine home and grilled it in a foil pack with butter and organic onions raised on a Boise farm--a true local dinner. The whitefish, as you might expect, has a white, mild-tasting meat, and goes well with local vegetables on a warm summer evening. I appreciate the fact that in my home river I can still catch and eat native fish—an activity becoming an unimaginable luxury in many parts of the world, as rivers are increasingly polluted, diverted or overtaken by non-native species.

Long may Idaho’s rivers run cold and clear—with mountain whitefish and other native fish feeding in their depths. –Matt Miller