The Wildfire Disaster Funding Act of 2014

Update: On August 1st we learned that a key Senate subcommittee included legislative language to enact the Wildland Disaster Funding Act, as well as language to access the disaster cap on an emergency basis to address suppression in FY15. This means that the key provisions of the WDFA could be included in the Senate version of the spending package that funds the main wildfire fighting agencies, USFS and BLM. In the meantime, the Associated Press reported on August 5th that the Forest Service will have to put about $400 to $500 million in projects on hold due to the escalating costs of this summer's fire season.

Editor's note: We would like to thank Senator Crapo, Senator Risch, Congressman Simpson, and Congressman Labrador for their support of the Wildfire Disaster Funding Act of 2014 (H.R. 3992, S. 1875).


Two weeks ago, the wildfire smoke rolled into Boise for the first time this year in what seems to have become an annual rite of summer. Even though AirNow.gov said our air quality was fine for healthy people to be active outdoors, I could feel the smoke in my eyes and throat on my bike to work.


So it seems timely to talk about the Wildfire Disaster Funding Act of 2014. It’s a bill in Congress right now that is a big priority for The Nature Conservancy nationally and here in Idaho. Not only do all four members of our delegation support the legislation, but Senator Crapo and Representative Simpson are lead sponsors. It’s a bill that will change the way the federal government pays for, and prepares for, the annual wildfire season. Even better, the non-partisan Congressional Budget Office found that the bill will not increase spending.

Simply put, the legislation would fund emergency wildfires like other national emergencies, ensuring that forest and conservation programs are not raided when firefighting funds are depleted.


How does the federal government pay for addressing disasters like hurricanes, floods, and tornadoes? There’s an agency called the Federal Emergency Management Agency (FEMA) with access to a disaster relief fund set aside just for catastrophes. We don’t know when or where these floods, hurricanes, or tornadoes will hit, but there’s a law in place that allows FEMA to tap special funds to help deal with these disasters.

What about paying for catastrophic wildfires? Congress gives the Forest Service and Bureau of Land Management (BLM) an annual firefighting budget based on the 10-year average of suppression costs. Sounds reasonable right? Well, what happens when we have a “big” fire year and the costs start piling on?  Do you smell smoke? That’s the scent of the Forest Service and BLM burning through their non-firefighting budgets, meant to pay for things like preventing future catastrophic fires.


When they go over the suppression budget, USFS and BLM have to start “borrowing” money from that year’s non-firefighting accounts for things like preventing hazardous fuel buildup around houses in the wildland urban interface. Because the intensity and cost of wildfires has risen dramatically, this borrowing has happened 8 of the last 10 years. Robbing these accounts year after year means that important forest management projects don’t get done, leaving unhealthy forests that are more susceptible to expensive catastrophic wildfires.


The Wildfire Disaster Funding Act would treat catastrophic wildfires like other natural disasters and make catastrophic wildfire suppression eligible for similar disaster funding. Under the bill, routine wildland firefighting costs, which make up about 70% of the cost of wildfire suppression, would continue to be funded through the normal appropriations process. The true emergency fire events, which represent about 1% of wildland fires but make up 30% of costs, would be treated like similar natural disasters and funded through disaster programs.


This is a good bill that the Conservancy will continue to work on, and that hopefully Congress will see fit to pass. In the meantime, we can only hope that this year’s firefighting costs don’t spread out of control and burn through the rest of the budget for taking care of our public lands.
Posted by Unknown at 3:03 PM 2 comments:

Where have all the trout gone?

Editor's note: Silver Creek is currently experiencing record low flows, high water temperatures and low dissolved oxygen levels. In an effort to reduce stress on the fishery at the preserve, The Nature Conservancy is temporarily restricting access to Silver Creek for fishing. For more information go to this link. Coincidentally, the following blog was written prior to these temporary restrictions.


By Bob Unnasch, director of science

I recently realized that I've been flyfishing for a half a century. A long time, for sure. For someone who has some trouble sitting still, I find flyfishing a great combination of adventure and relaxation. So, I look for opportunities to fish wherever I am. And, I look for interesting places to fish whenever I can. I caught my share of 3” bluegill from tiny creeks in Virginia, 20+ pound bluefish from the Atlantic Ocean, and last month was casting to 6’ “high and happy” tarpon while neck-deep in the Gulf of Mexico.

Idaho is a wonderful place to be a fly fisherman. We have world-famous streams like Silver Creek and the Henrys Fork. But, we also have thousands of miles of streams harboring small trout that enthusiastically take a fly. I spend a lot of time wandering around, testing these smaller waters with a small fly rod.

Every spring I make forays into the Owyhee Canyonlands looking for desert trout. The Columbian Red-band Trout is Idaho’s native rainbow trout. At one time, it was found throughout the Columbia River basin. Unfortunately, it has been largely displaced by a different strain, the McCloud River rainbow. McCloud River rainbows are the favored trout to grow in hatcheries, and so have been introduced into rivers and streams worldwide. Redbands are unique in that they are able to tolerate warmer water than other trout – at least for short periods. But, they remain trout, and need cold water to thrive.

Most Idaho fishermen think of Redbands as tiny little fish, but under the right circumstances they can grow to be over 20” long. Which brings me back to my hikes into the Owyhees. I've discovered some places that have big naïve Redband trout. How better to enjoy a spring weekend than to be in the desert catching big trout? Early this past May, my son and I spent a weekend at one of my favorite desert streams expecting to catch some of those big Redbands. And, nothing. We didn’t catch any fish, which isn’t all that surprising. But, we didn’t see any fish either. This is a stream that, in past years, would have dozens of feeding trout per mile in May. We walked and walked and looked and looked. No fish.

This got me to wondering what happened. Where have all the trout gone? The water temperature was perfect for trout, 54o F. But, the water temperature isn’t always that cold in these desert streams. During the summer months streamflows decline and the water warms up. The Redband trout then retreat to deep, spring-fed pools where they sustain themselves in these little pockets of cold water.

Recall that last summer was hot. All summer. The daily average temperature in Boise last July was 93o F, more than 5o above normal.  This heat wave was reflected in our river’s temperatures. On July 2, the water temperature in the Owyhee River reached 82o. The river’s daily high exceeded 80o from July 17 to July 27. The lethal temperature for rainbow trout is ~77o. Where had all the Redband trout gone? I fear they died during the heat wave last July. I wonder how many other streams may have lost native fish at the same time. As I write this the stifling hot second week of July, it seems 2014 will be a repeat of last year.

This may be a harbinger of the future of many of Idaho’s small streams. We are seeing smaller snowpacks and earlier and faster snowmelt. This translates into more runoff in the spring and less groundwater feeding streams in the summer. Our groundwater is always ~55o, and it is this cold water that sustains our fish during the hot summers. But, with lower summer flows, the water temperature is going to rise. And, as I think we’ve experienced last year in the desert, a couple weeks of hot weather can be enough to dramatically change the biological character of a stream. 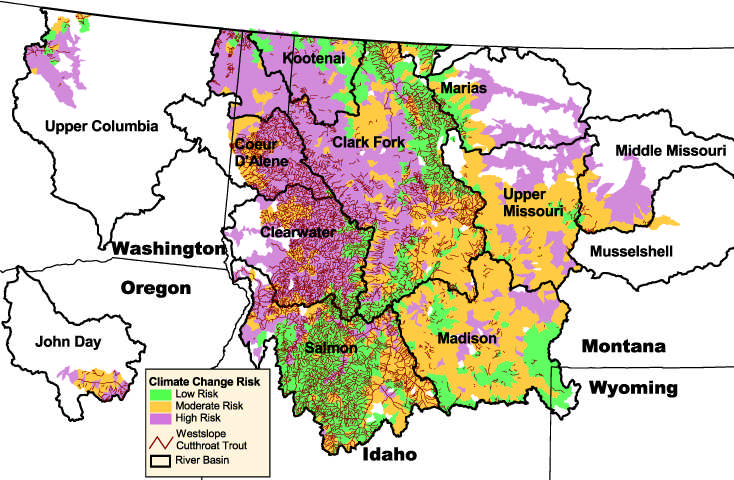 Outside of the highest elevation portions of its range, westslope cutthroat trout are at risk. I have little doubt that an analysis of our other native trout would show similar patterns.

This year, Silver Creek is threatened by low flows and possibly too-warm water. Flows are at historic lows for this time of year and many of the springs feeding the creek have largely stopped flowing. These low flows will likely result in water temperatures that will stress the stream’s trout (and other species), and might approach that lethal 77o in some reaches of the creek. The Conservancy is doing what it can to ensure that the fish, and other species in the creek, are stressed as little as possible. We are monitoring stream temperatures and, if warranted, we might ask fishermen to stop fishing until the water cools down.

I imagine many other streams will also be unusually warm this summer. Most of these don’t get the attention of Silver Creek, yet, the fish in these stream will be similarly stressed. I’m going to take the temperature of any stream I visit this summer before casting a fly. If it has a fever of 70o or higher, I let it rest until it returns to a healthy 58o.
[1] Williams, J.E. et al. 2007. Climate Change and Western Trout: Strategies for Restoring Resistance and Resilience in Native Populations.
Posted by Unknown at 10:40 AM 1 comment: