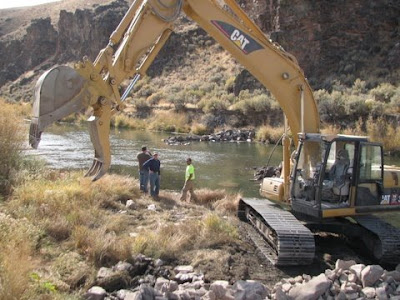 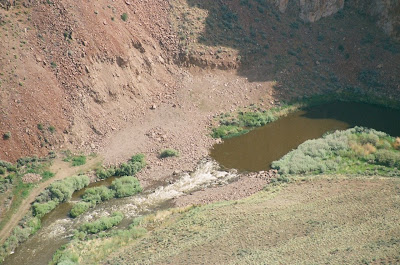 “We are so happy with the progress that has been made on this project with our partners. It really is a wildlife haven,” says co-owner Dennis Fitzpatrick. “The conservation here reflects the same care and stewardship for the Owyhee lands as the recent passage of federal legislation protecting this special part of the state.”
Posted by TNC-Idaho at 10:12 AM No comments: 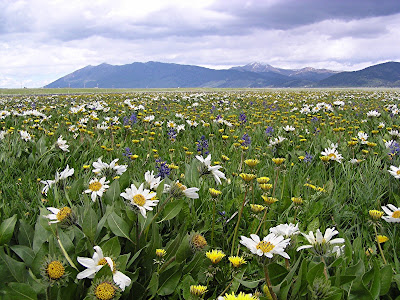 Flat Ranch makes a perfect stop if you're heading to Yellowstone National Park this summer: The preserve is just 15 miles west of West Yellowstone. It is right off Highway 20 and is well marked.

In addition to stunning wildflower displays, you will likely see pronghorns, sandhill cranes, ospreys and other wildlife.

The preserve is free to visit. A visitor center has informational displays and a spotting scope on the front porch to assist in wildlife viewing.

Every Wednesday, and most Saturdays, Flat Ranch offers a free lecture series throughout the summer. Learn to identify the wildflowers, gaze at stars, see live raptors and more.

You may also hike and fish (catch and release only) on the preserve.

This summer, include the Flat Ranch in your Yellowstone or East Idaho trip plans. Stop by and enjoy the preserve!
Posted by TNC-Idaho at 1:18 PM 1 comment: 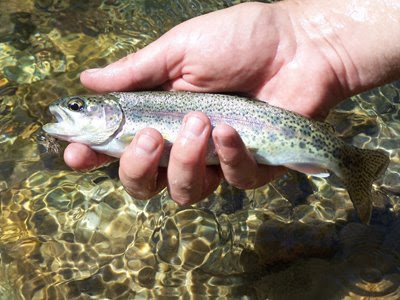 Is the Big Wood destined to become a bass river? Will salmon conservation efforts in Idaho soon be rendered moot, because rivers are too warm for coldwater fish? Will New Zealand mud snails in Silver Creek--present but not problematic--suddenly erupt and overtake the whole watershed?

We don't have the answers to these questions, but one thing is certain: Climate change is poised to have profound impacts on native fishes--and fishing.

That was the message delivered by renowned fisheries biologists John Casselman and Jim Martin at last week's Outdoor Writers Association of America conference.

Black crappies are expanding in many lakes, preying on walleyes. And his studies mirror what is being found by fisheries biologists across the country.

"Fish are very sensitive indicators of climate change and are responding," Casselman says. "We should accept that climate and temperature are driving factors affecting fish production and manage accordingly.

Martin, the new chair of the Theodore Roosevelt Conservation Partnership, sees this as an opportunity rather than an obstacle.

"In my forty year career as a biologist, I've seen the attitude toward climate change go from denial to depression," he says. "But depression is a paralyzing condition. We need to move forward with energy and excitement and hope. This is the best time in history to be a conservationist."

Martin sees anglers playing an important role in solving the climate change problem. If they haven't seen the impacts on their favorite waters already, they will soon, and he hopes it mobilizes them into action.

"There are going to be a lot of surprises in the new century but we're up to it," he says.

To read more about the effects of climate change on fishing and hunting, check out the excellent new web site, Seasons' End.--Matt Miller
Posted by TNC-Idaho at 1:27 PM 1 comment: 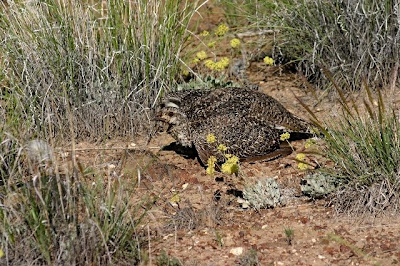 Nature Conservancy volunteer Ken Miracle sends these photos of sagebrush wildlife from a recent trip to the South Fork of the Owyhee River.

The first is a sage grouse protecting her brood. It's an important time of year for sage grouse, as the young are busy consuming protein in the form of insects. 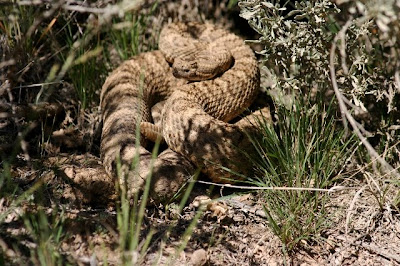 Of course, on any hike in the Owyhees, you may encounter a Western rattlesnake. They're very interesting animals, and the chances of being bitten are extremely remote.
Some of Idaho's most rewarding wildlife viewing is in the sagebrush country of the Owyhees. Bighorn sheep and mountain lions, badgers and bobcats, prairie falcons and golden eagles, are all abundant here.
Recent legislation creating Owyhee wilderness, and Conservancy conservation projects that control weeds, restore native plants and restore wetlands, provide a hopeful future for this wildlife.
Get out and enjoy the extensive publics land--your land--in the Owyhees. Abundant wildlife and adventure await those who get off the interstate.
Posted by TNC-Idaho at 9:56 AM No comments: 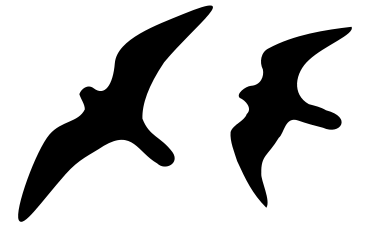 Many believe that technology, television and computers are leading causes in separating people from nature--undoubtedly true in most cases. But at times, technology also help generate excitement about wildlife.

Peregrine falcons have been flying around Boise for years, but never have they generated as much excitement as this year, with the Peregrine Cam in their downtown nest box.

The young peregrines have hatched and very active. If you haven't already, check them out!
Posted by TNC-Idaho at 1:32 PM No comments: 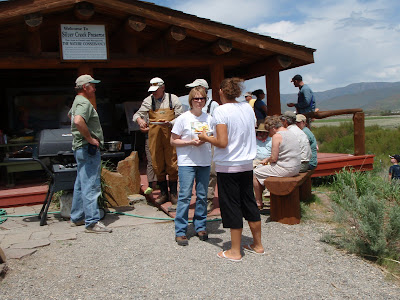 Submitted by Meredith A. Stewart, Silver Creek intern
Such excitement around here as opening day of fishing season arrived!

The evening prior to opening day, dozens of trailers were parked and tents popped up. Over the course of the next day, 176 visitors signed in at the Silver Creek Preserve.

The barbecue at the visitor center was well attended. On exhibit was a display thanking donors for their aid in securing a conservation easement on property directly south of the center.

Whether meeting the Silver Creek staff or catching up with fellow fishermen and friends, the get-together was a success.

Those who fished, watched birds and/or photographed found plenty to keep them entertained. On the nature hike led by Ginny Glasscock, participants took their time spotting wildflowers, identifying birds, and exploring the desert ecology.
It is great to see people using the New Zealand mudsnail stations positioned outside the visitor center, Kilpatrick Bridge, and Sullivan's Lake access locations. An invasive species, the New Zealand mudsnails were first detected in the Silver Creek watershed in 2001. The scrub stations keep the mudsnail population down and prevent contamination in other areas.
The start of fishing season comes at about the same time as the arrival of afternoon thunderstorms, swarming insects, and the young moose. Calf sightings are common along the banks of Stalker Creek.
If you keep an eye out in the water, on the land, or in the air, you'll be sure to see nature at work. We look forward to a great summer and seeing you around the preserve, at the visitor center or on the creek!
Posted by TNC-Idaho at 10:35 AM No comments: 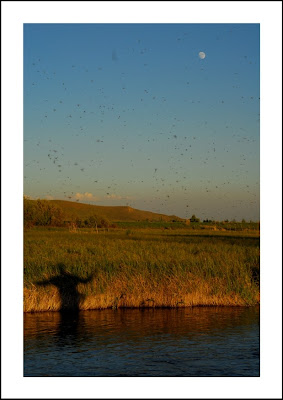 The brown drake mayfly hatch on Silver Creek is one of the most spectacular hatches you'll ever see--if you're lucky enough to actually be there when they hatch.

Brown drakes are large mayflies, and they hatch in numbers that defy description. As with many mayfly species, they live as nymphs underwater, and then mature all at once. They emerge from the water as winged insects, breed, lay eggs and die. They cloud the sky, they cover the water. And they hatch only for a few days each year, typically in early June.

As in other places where prey exists en masse, this natural phenomenon draws predators. In this case, trout.

It's a feeding frenzy: Perhaps the one time on Silver Creek when trout are reasonably easy to catch.

Anglers know this. The problem is, they don't know when exactly the drakes will hatch.

Last year, I brought friends to fish this hatch. We waited for the drakes, but by the end it felt more like the absurdist play Waiting for Godot--in which two actors spend the whole play literally waiting for Godot. Who never shows.

I hoped this year to avoid a repeat of that effort. Last night, it looked promising. A few brown drakes appeared on the water.

Or not. As darkness fell, it became apparent that tonight was not the night. Everyone else left, but I stuck around. I had no schedule or obligations and maybe I'd have the whole hatch all to myself.

Of course, the insects never hatched. As my mind finally acknowledged that nothing would happen tonight, I walked back to my car, the words of another angler echoing in my head: "They'll be on tomorrow for sure."

Naturally, tomorrow I did have a schedule and obligations.

But for any other angler reading this, perhaps tonight's the night. Then again, anglers are incurable optimists; otherwise, they wouldn't fish Silver Creek.

Trust me, though, it's worth the wait. Maybe you'll see for yourself tonight. Maybe. --Matt Miller

Photo by Morgan Buckert.
Posted by TNC-Idaho at 10:31 AM 1 comment: 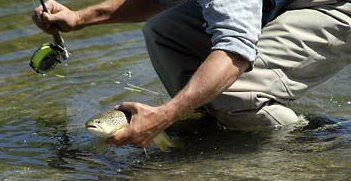 Many Idaho rivers and reservoirs contain mercury warnings. What does this mean? Should you forego eating fish caught from these waters?

A publication by the Idaho Department of Health and Welfare, Safe Fish Eating Guidelines, provides a good overview of fish consumption, including recommended monthly limits.

Of course, the fact that wild fish from our state's waters have to come with a health warning is a sad state of affairs. Fish is a healthful food, and many waters contain populations that can be sustainably fished.

The Idaho Conservation League has done an exemplary job of tracing sources of mercury poisoning and educating people about the high levels of mercury in Idaho fish. Hopefully, this leads to a future where we can eat fish without worrying about poisoning ourselves. Until then, the Safe Fish Eating Guidelines will help you make educated decisions.--Matt Miller
Photo by Kirk Keogh, first2lastlight.com
Posted by TNC-Idaho at 3:46 PM No comments: