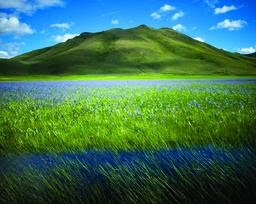 The Nature Conservancy extends its congratulations to our conservation partner, Lava Lake Land & Livestock, for recently being awarded the Cecil D. Andrus Leadership Award for Sustainability and Conservation by Sustainable Northwest, as well as national awards from the U.S. Forest Service and the Bureau of Land Management.

Mike Stevens, president of Lava Lake, summed up Lava Lake's philosophy this way: “The sheep and wildlife that use our lands have the same basic needs. They both require traveling long ranges to find forage. Why not preserve long-term viability for all?” 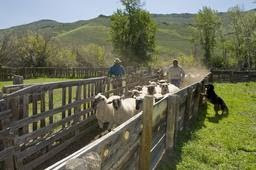 Lava Lake has been an important partner of The Nature Conservancy for the past nine years.
The ranch began its work by commmissioning a Conservancy ecologist to survey and create conservation and grazing management plans for the entire ranch, which were completed in 2004. 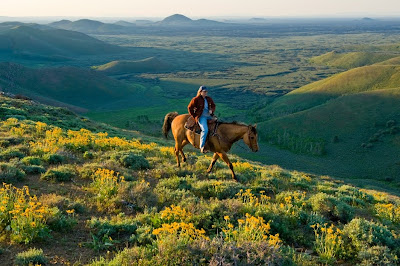 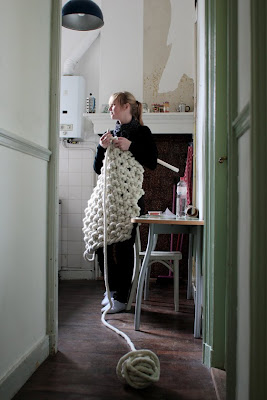 This year, wool from Lava Lake sheep was used in a blanket commissioned by the Design for a Living World exhibit, sponsored by the Conservancy.
This exhibit, shown at the Smithsonian's Cooper-Hewitt Design Museum in New York, showcased artwork from sustainably produced materials around the world.
Dutch artist Christien Miendertsma believes that embedded in the wool are stories from the land. 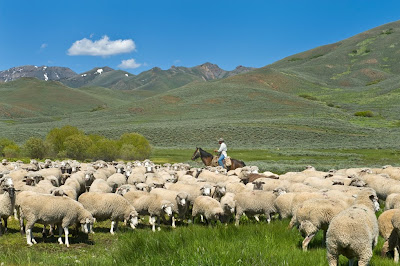 The story of Lava Lake has been one of ranching working to the benefit of conservation.
Three prestigious national awards in one year is a remarkable achievement--and a strong testament to the success of Lava Lake's conservation work. We extend our congratulations to our partners at Lava Lake--and look forward to continuing our work that benefits the land, wildlife and ranching. 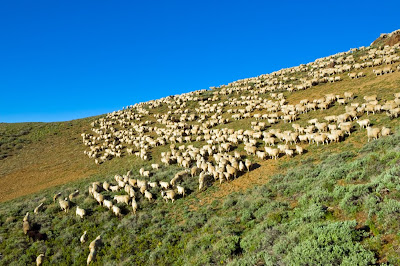 If you fly fish or have ever picked up a rock from an Idaho stream, you probably are well familiar with caddis fly larvae and their cases.

Caddis flies--a common aquatic insect in many Idaho rivers and streams--live as larvae on the stream bottom.

Caddis larvae use silk to spin protective cases. They incorporate bits of gravel, sand, crustacean shells, plant matter and other debris into their shell. The result looks like a dark tube, attached to rocks.

French artist Hubert Duprat put pieces of gold and jewels with caddis larvae in an aquarium. The results are astounding, as you can see above. See more photos of Duprat's work.

Caddis flies generally need clean water to survive--and fortunately, in Idaho, they can be found in great numbers from Silver Creek to the Salmon River, from the Henry's Fork to the Boise River. The next time you're walking along your favorite stream, pick up a rock and check it out for the caddis fly's intricate work.
Posted by TNC-Idaho at 12:03 PM 1 comment: 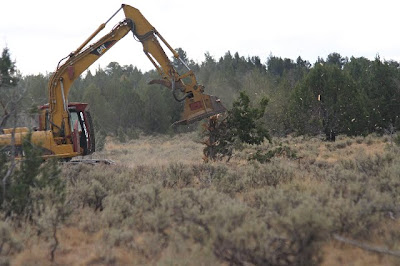 Junipers are a native tree in Idaho. So why is The Nature Conservancy helping to chomp them up? 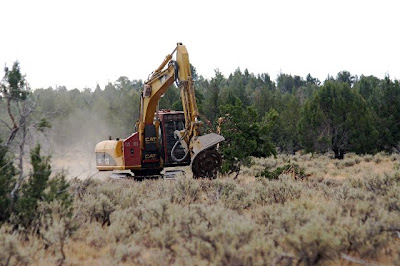 Junipers may be native, but they are still spreading rapidly into sagebrush country--far too rapidly for wildlife. Why?

In the Owyhees, analysts estimate that junipers are expanding their range by 2500 acres per year.

Sage grouse require open areas to display in the spring time. Junipers provide the perfect perch for raptors, so the grouse avoid these areas. In the shade of junipers, grasses and other plants important for wildlife disappear--leading also to increased likelihood of soil erosion.
When juniper encroaches, it affects the whole ecosystem.

Enter the juniper crunching machine. The Nature Conservancy is working the the Owyhee Local Sage Grouse Working Group and Jordan Valley Coordinated Weed Management Area to use this machine--called a juniper masticator--to chomp up the spreading junipers.

The project is focusing on meadow areas important for sage grouse. 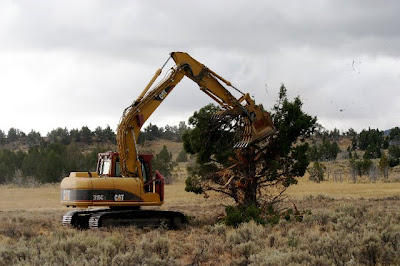 The machine is relatively light so it has a very low impact on sagebrush and native grasses. It literally chomps up the entire juniper tree. 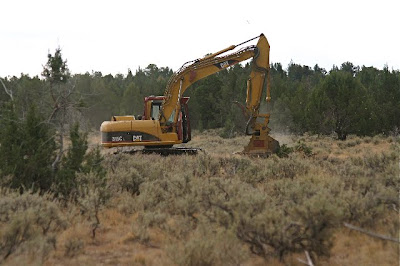 The masticator chomps the tree all the way the ground--if even one branch remains, the juniper just regrows.

When the project is finished, nice meadows with sagebrush and native grasses will be all that remains--perfect for sage grouse and other wildlife. 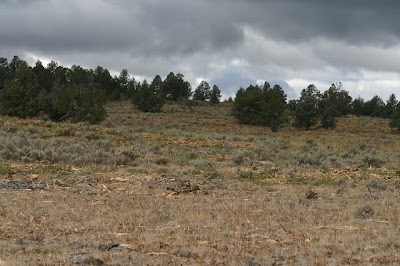 The masticator leaves nothing but mulch, so the chomped up juniper is returned to the soil.

This is a demonstration project, and one of the hopes is that this form of juniper control can be applied to private ranchlands and provide a new source of income to ranchers.

If proven cost effective, the chomped-up juniper would be sold for biofuel or mulch--a sustainable industry that would also improve habitat conditions in the Owyhees and other sagebrush habitat.--Matt Miller 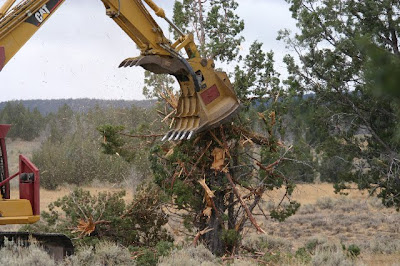 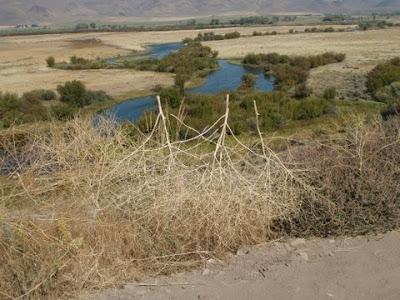 Wide open spaces, a coyote howling against a full moon, tumbleweeds rolling across the prairie ….. except this last Western icon is not part of the natural landscape!

A tumbleweed may be one of several plant species, mostly introduced as hitchhikers in grain cargo shipments from Russia and Europe as early as the late 1800s.

They become a true tumbleweed when the stem of the dry, mature plant breaks off in the wind, leaving the whole above-ground section free to whirl away and spread seeds as it travels.

At The Nature Conservancy’s Silver Creek Preserve, the predominant type is the “tumbling mustard.”

It is less dense and thorny than the Russian thistle tumbleweed. These lightweight clusters bounce and skip along roads and fields in a stiff breeze. 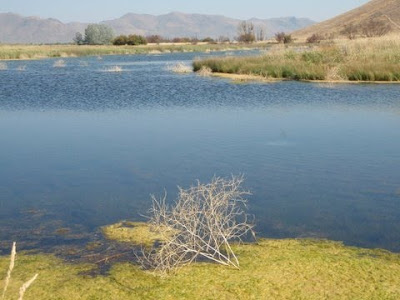 They often end up in Silver Creek, rolling along on top of the water’s surface if the wind is strong enough.

While some people think of tumbleweeds as innocuous, or even romantic, many consider them an unsightly nuisance.

They pile up against any leeward obstruction, including road bank , gates, and fences. Their efficient seed dispersal method allows invasive weeds to displace native vegetation. And their tinder-dry branches are a fire hazard in the arid Idaho desert.

Balls of tumbleweeds are removed from the deck and perimeter of the Silver Creek Visitor Center after windstorms for this very reason.

But for all their drawbacks, tumbleweeds continue to inspire the imagination. We all know the famous cowboy song, penned by Bob Nolan of the Sons of the Pioneers in 1932.

Besides being recorded by many famous country and western singers, this song has also been covered by more unlikely artists, such as Pat Boone Elvis Presley, Clint Eastwood, and the Supremes.

The name “tumbleweed” has been appropriated for commercial use, including two movies (1925 and 1999), restaurants, clothing, a line of cowboy gear, a children’s gymnastics chain, a singing group, a comic strip, and dancehalls in Texas and Oklahoma.

An Arizona town decorates a tumbleweed each December for its Christmas tree. You can contact companies in Utah, Texas, Arizona, and Kansas to actually purchase a real tumbleweed and have it shipped to you.

Prairie Tumbleweed Farms markets logo T-shirts. Curious Country Creations is having a sale on their Giant Western Tumbleweed, marked down to $28.99 from $40.

Or better yet, from now until winter, you can admire the Silver Creek tumbleweeds for free ! 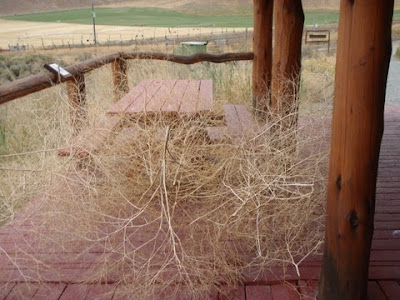 Salmon Back in Big Springs Creek 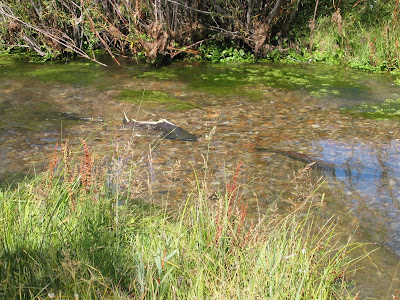 The Nature Conservancy has been working with partners in the Pahsimeroi River to remove barriers to fish migration, increase river flows when salmon are in the river and to reconnect tributary streams with the Pahsimeroi so salmon can access them.

The goal, of course, was to allow migrating salmon access to spawning areas they haven’t been able to reach for decades.

For years, one or two hardy salmon made it up to Big Springs Creek. A diversion and cross ditch kept the rest of the salmon out of this habitat.

This year (with the diversion removed), preliminary counts show 69 redds—with salmon occupying much of the suitable habitat in Big Springs Creek and other tributaries.

This result was also made possible by the Conservancy’s purchase of a ranch in the Pahsimeroi Valley, which it then sold to organic beef ranchers Glenn and Caryl Elzinga. This partnership enabled the elimination of the diversion and cross ditch.

Almost half of the redds are located on Big Springs Ranch, recently protected by the Conservancy through a conservation easement.

So this year, we can truly say: Welcome home, salmon.
Posted by TNC-Idaho at 3:12 PM No comments:

This evening, The Nature Conservancy in Idaho recognizes Laird Noh, who retires from our Board of Trustees after an amazing 23 years of service.

A sheep rancher and former state senator, Laird has spent a lifetime looking after the public's interest in land, water and wildlife. 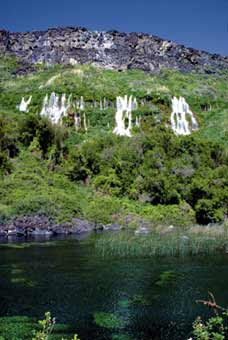 Laird was instrumental in the protection of three areas along the Snake River that are now state parks: Thousand Springs (above), Billingsley Creek and Box Canyon. The establishment of each of these protected areas required protracted negotiations with state government and private interests. Mr. Noh helped the Conservancy staff chart a course and encouraged the State of Idaho to pursue protection of these areas.
Laird also convened the Idaho Working Lands Coalition in 2005, a coalition representing agricultural, conservation and sporting groups working together to protect private working lands from development.
In 2005, The Nature Conservancy awarded Laird its Lifetime Achievement Award, the organization's highest volunteer honor. The award read: Laird Noh’s influence on the Idaho Chapter has been pervasive and constant for two decades. No volunteer has done more to shape the chapter’s achievements on the ground and its values in dealing with the rural communities in which we work. 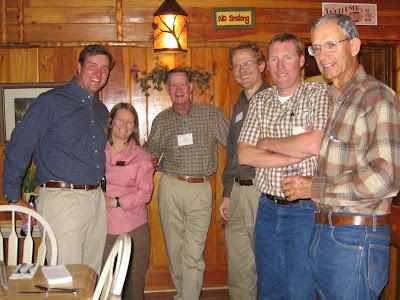 Laird, thank you for all your hard work on behalf of The Nature Conservancy and Idaho conservation for more than two decades. You have helped shape a better Idaho with your thoughtfulness, insight and expertise.
Posted by TNC-Idaho at 9:36 AM No comments: