'A Day at Silver Creek' 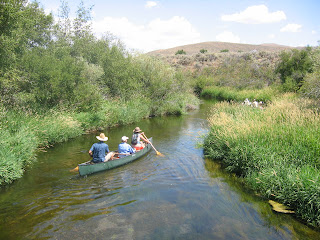 (above) Canoers enjoying 'A Day at Silver Creek' 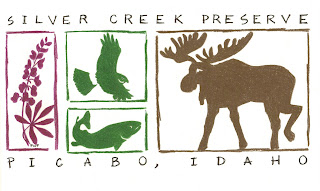 ''This year's 'A Day at Silver Creek' was a great success!! We had over sixty people participating in all the events- birding, nature walks, scavenger hunt, canoe floats and barbeque! The canoe floats were such a success, we will be adding on next year in order to accomodate all the people.
In addition, our t-shirt contest winner was chosen by the public. The winner, who will have the pleasure of seeing her artwork on the next Silver Creek t-shirt, is Poo Wright-Pulliam. Congratulations Poo!!
Posted by TNC-Idaho at 8:17 AM 1 comment: 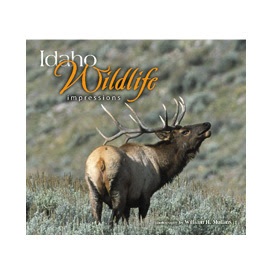 William H. Mullins' photographs are common features in The Nature Conservancy's Idaho publications. His landscape shots have graced the covers of the last three annual reports, and his photographs of Idaho's wildlife, people, rivers and canyons appear in our newsletters, brochures and preserve signs.

Looking through the book, one can't help but think that Idaho is undersold as a wildlife watching destination. It's a state with grizzlies, wolves and lynx that also offers premier raptor watching. There's unique desert wildlife like burrowing owls and sage grouse, but also big-water species like pelicans and grebes. They're all here in the book, often captured with close-up, striking action shots.

The book not only includes the photos, but also biological tidbits about all the species featured. It is a great celebration of Idaho's incredible biodiversity.
Posted by TNC-Idaho at 10:44 AM No comments:

'A Day at Silver Creek' has activities for the whole family!! 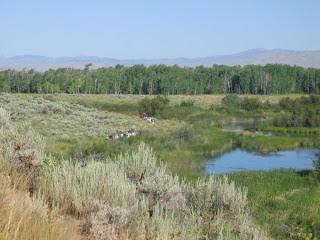 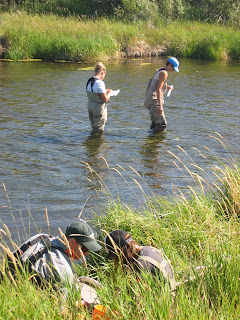 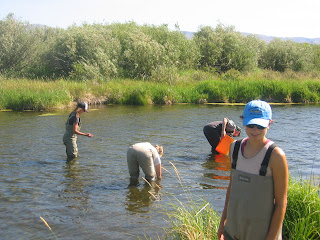 The Silver Creek staff have been helping the U.S. geological survey with a study that looks at nutrients and their effects on ecology (the NEET study). This study, started in 2007, includes over 30 sites throughout central Idaho, including five in the vicinity of Silver Creek. The Silver Creek staff helped collect data on Stalker creek including: macrophytes, algae, macroinvertibrates, substrate, habitat, and stream chemistry. The study will help:
1. Determine the interaction of nutrients and biological communities (algae, invertebrates, and fish) in streams, and how these interactions are modified by the agricultural setting, including watershed characteristics, stream habitat, and other natural factors.
2. Assess the interrelations among nutrients, algal biomass, and stream metabolism, defined as the gain and loss in dissolved oxygen associated with photosynthesis and plant and animal respiration.
3. Determine the transport, chemical transformation, and retention of nutrients (referred to as "nutrient cycling") in the water column and surrounding sediments.
4. Test existing ecological indicators of nutrient enrichment and develop new models for the prediction of ecological effects.
(taken from www.wa.water.usgs.gov/neet/)
Why are nutirents important? Nitrogen and phosphorus are essential for healthy plant and animal populations in streams, with each water body requiring a specific balance of nutrients to maintain aquatic life. However, elevated concentrations of nutrients can lead to excessive, often unsightly, growth of aquatic plants. Excessive aquatic plant growth reduces dissolved oxygen in water and alters stream habitat, both of which are critical for fish and other aquatic life. These problems occur over the full range of surface waters, from small streams to receiving coastal waters where they can threaten fish and shellfish that are economically and ecologically important. Overgrowth of aquatic plants can clog water-intake pipes and filters and can interfere with recreational activities, such as fishing, swimming, and boating. Subsequent decay of aquatic plans can result in foul odors and taste. An improved understanding of the effects nutrient enrichment in small streams is particularly important because these systems can be particularly effective at processing nutrients along with being highly sensitive to nutrient enrichment (www.wa.water.usgs.gov/neet/).
USGS staff will be presenting findings from similar studies (fish and macroinvertebrates) on Silver Creek at the Watershed Symposium, October 27, 2007. Call 788-7910 for details on this event.
Posted by TNC-Idaho at 9:38 AM No comments:

The Critters Among Us 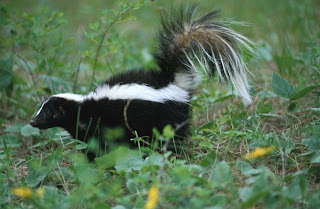 This weekend, the beginnings of new holes appeared around our garden shed, the tell-tale signs of Mephitis mephitis ("Noxious gas, noxious gas") -- the striped skunk. This is hardly an unusual occurrence; judging by the signs--and smells--around our neighborhood, skunks are out patrolling the backyards most nights of the week. On a couple of occasions, I've almost stepped on them while out for a late evening jog on Boise's Greenbelt. Fortunately, the skunks spared me a blast of their musk. Some of our neighbor's dogs have not been so lucky.

The striped skunk, historically, was not so common around Idaho. Despite its formidable defenses, skunks fare poorly when matched against large predators. The same goes for raccoons and red foxes--two other critters that I now know as neighbors. In fact, before European settlement, no red foxes were found in the state. The suburban habitats and farm edges are to the fox's liking, much more so than wilderness.

As fragile as nature may at times seem, many species are also amazingly resilient. Of course, there are plenty of species that need the big, wide-open spaces. But others thrive near humanity. While we may complain about city park geese, or downtown pigeons, these species also present the most likely scenario for daily interactions with wildlife. When I find bits of pigeons scattered downtown--the remains of a successful peregrine falcon hunt--I thrill the wildness to be found even amidst the largest city in our state.

India, quite apart from a place like Idaho, is a country with more than one billion people. And how is wildlife faring there? Not as bad as you might expect, reports Nature Conservancy lead scientist Sanjayan in his latest column. In fact, Indians have learned how to live with wildlife in many places--including free-roaming monkeys at the Presidential Palace. Indians have found ways to live alongside wildlife, even while humans survive at incredible population densities.

If biodiversity is to exist outside national parks, we must learn to reconcile humanity's coexistence with wildlife. While I covered up the skunk diggings in my backyard to prevent further incursions, I'm also glad to share my neighborhood with such critters--provided they keep their stink to themselves. 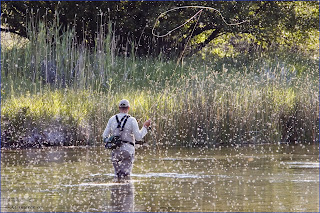 Trico hatch-- photograph by Kathleen Cameron of Majestic Feathers, 2007.
Its been a hot summer this year and the hatches are happening sooner than usual at Silver Creek Preserve. The tricos are hatching a few weeks early and they have been putting on quite a show the past few days. Avery McKenzie, Silver Creek Preserve Intern, said it was the best fishing she has ever witnessed!!
Posted by TNC-Idaho at 1:31 PM No comments: 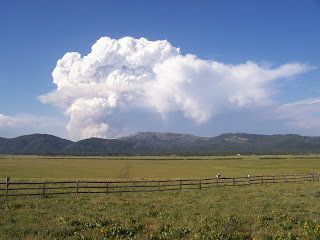 Flat Ranch Preserve offers many opportunities for family fun this summer. Each week, the summer speaker series offers different activities on the wildlife, history and conservation of the Henry's Lake area.
Recent activities have included nature hikes on the property to see birds and other wildlife on the property: 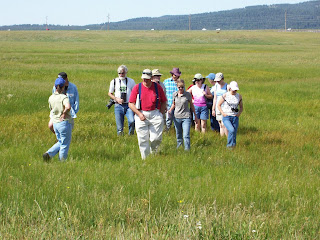 A presenter from the nearby Grizzly and Wolf Discovery Center also brought by a golden eagle and other birds of prey for an evening presentation. 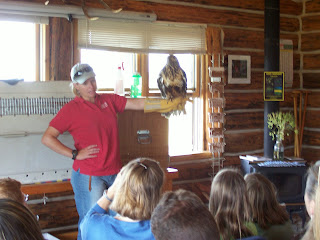 Even if you can't attend an evening lecture, there is a spotting scope at the visitor's center to look across the Henry's Lake Flat and enjoy the wildlife common to the area, including pronghorn, sandhill crane, osprey and curlew.

Meet a Karelian bear dog at The Nature Conservancy's Flat Ranch Preserve--located just north of Macks Inn off Highway 20--at 7 pm Wednesday, July 18. Jennifer Pils of the Grizzly and Wolf Discovery Center in West Yellowstone will introduce the audience to Jewel, a Karelian bear dog retired from active use. The event is free to the public and is great for children.

The preserve is located just 15 miles west of the West Yellowstone entrance to Yellowstone National Park.

Karelian bear dogs were originally bred in Finland and Russia to hunt bears and other large mammals. Fearless and intelligent, these canines are now being put to a new use: to scare off problem bears from areas used by humans. Combined with other averse conditioning such as pepper spray and rubber bullets, Karelian bear dogs help teach bears which areas are off limits, so the bears can continue to live and thrive in Yellowstone country.

Make Flat Ranch a part of your summer Yellowstone vacation!