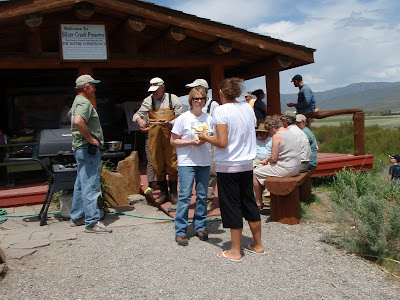 This Saturday is the opening day of fishing season at Silver Creek.

Enjoy some fishing and celebrate with our staff and volunteers with an opening day barbecue, beginning at 12:30 pm at the visitor center.

Staff will be sharing information on the Silver Creek enhancement plan, an effort to improve fish and wildlife habitat over the entire watershed.

We hope to see you on the preserve!

And check Idaho Nature Notes frequently this summer. New this year, we'll be posting regular fishing reports, with information on the hatches and what's working best on the creek.
Posted by TNC-Idaho at 3:14 PM No comments: 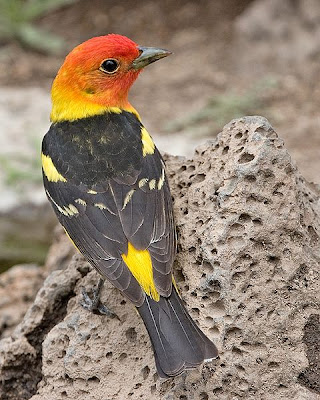 It's a great time of year to see two of Idaho's most colorful birds: the Western tanager and Bullock's oriole.

These beautiful species are quite common, if you know where to look.

The Western tanager (above) prefers forested habitat, although you may also see them in brushy habitat along streams. This species is found farther north than most tanagers, which are most associated with tropical environments. I find them to be one of the most striking birds, particulary when they have bright red facial markings.

Interestingly, according to the Cornell Lab or Ornithology, the tanagers don't manufacture this red pigment. Instead, they acquire it from their diet--from insects that ingest it from plants.

The Bullock's oriole (below) thrives amongst streamside vegetation. For instance, look for them in the willows at Silver Creek Preserve. The Idaho Birding Blog has some excellent information (and photos) on orioles around Boise, where they're also quite common.

Both of these colorful birds eat insects and fruits. You can attract them to your backyard by hanging or impaling old apples near your bird feeder. If orioles or tanagers are around, they'll find the fruit. 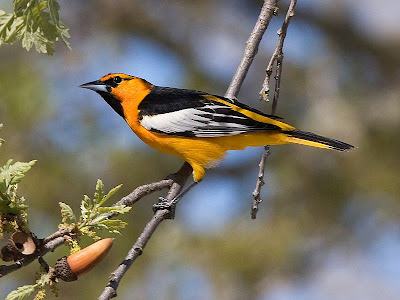 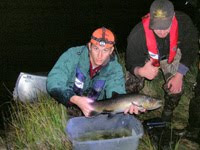 Would you like to help protect some of Idaho's most special places? Here are some upcoming volunteer opportunities that may be of interest.

At Silver Creek Preserve this summer, staff and partners will monitor fish, insects and habitat. We need volunteers to help especially with the fish shocking, collecting and recording.

The shocking will take place on June 15 and 16; we need four or five volunteers. The week of June 21 and 28, we will help the Idaho Department of Fish and Game with their mark and recapture study—so we will be shocking at night. Please call the Silver Creek Office at 208-788-7910 if you are interested in helping.

Silver Creek has an active volunteer program. Check our volunteer page for the latest information, or call the office if you would like to bring a group to help. 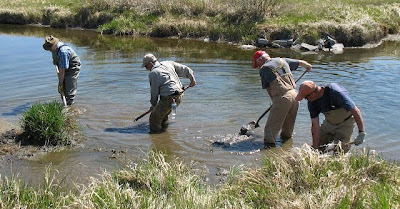 Work begins at 10 am. Dress to work and bring rags and cleaning supplies. To get there (from the west): Take the second Wendell exit, turn left to 1500 and then follow the signs to Ritter Island. 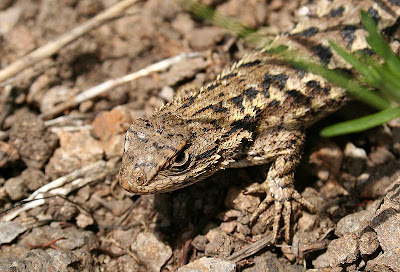 With southern Idaho finally experiencing warmer temperatures, lizards have become quite visible. You might catch a glimpse of one scurrying across a trail, or sunning itself on a rock.

You'll most commonly encounter the Western fence lizard (pictured above), with a mottled brown back and blue belly. They can be seen on rocky slopes, around abandoned buildings, and yes, on fence posts.

Their propensity to sun themselves render them vulnerable to predators like raptors, which is why they've evolved lightning-fast reflexes--a trait familiar to anyone who has tried to catch one.

At this time of year, males fiercely defend their territory (a whopping .01 acre). Soon females will lay a brood of ten eggs.

Fence lizards also possess a nice quality that benefits humanity: They reduce Lyme disease. When ticks feed on lizards, a protein in the lizard's blood kills the bacteria that cause the disease. In areas with large lizard populations, less people are infected with Lyme disease.

But do lizards face an uncertain future? A recent study, published in the journal Science, suggests many lizard species may be seriously threatened by climate change.

The study in Mexico found that when faced with a warming climate, lizards spend less time hunting and more time in the shade. This weakens their condition and leads to a population reduction.

The scientists who authored the article also wrote an editorial, in which they state "extinctions are not only in the future, but are happening now." Hopefully studies like this inspire conservationists to take action--for lizards and other species that are an important part of Idaho.
Posted by TNC-Idaho at 12:02 PM No comments: 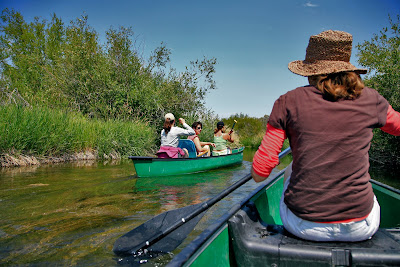 The Sun Valley Families blog features a nice post on another activity to enjoy at The Nature Conservancy's Silver Creek Preserve this spring: kayaking.

Silver Creek is a great place to explore by canoe or kayak. For an angler, it can be an illuminating (and humbling) experience: Schools of fish dart under the canoe; big trout lurk in the shadows.
You'll surely see waterfowl, herons, marsh wrens and many other birds. If you're lucky, you may see a mink or a moose.
If you're planning to float the creek, now is a great time to do it, because the stream is not yet open to fishing (the season opener is May 29).
You can still float the creek during fishing season, but please respect anglers: Stay quiet, don't splash the water and float behind anglers when you pass. Also, be sure to sign in at the visitor center.
We hope to see you on the preserve, and enjoy your float!
Photo by Giuseppe Saitta.
Posted by TNC-Idaho at 10:21 AM No comments: 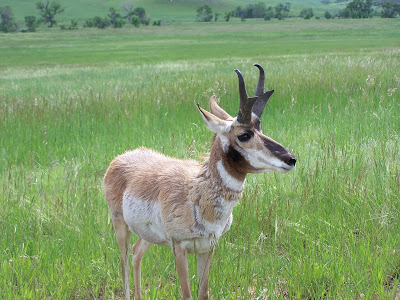 It's spring, and that means the animals of the world are in motion again — flying, swimming, running and crawling to their summer homes and breeding grounds.

Idaho has some of the most dramatic wildlife migrations on the continent.

To celebrate, here's our list of our state's top five "must see" migrations. How many have you seen?
Posted by TNC-Idaho at 9:49 AM No comments:

Geese in the Long Grass 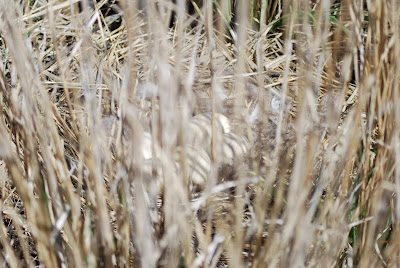 For wildlife, restoring an area to native plants is like creating a Field of Dreams: "build it, and they will come."

That's certainly been the case at the 45 Ranch, located deep in the Owyhee Canyonlands.

Two years ago, co-owners Charles Conn and Dennis Fitzpatrick worked with The Nature Conservancy and other partners to restore wetlands and native plants to the ranch.

The restoration project allowed the Owyhee river, which flows through the property. to behave more like a wild river--including moving from its channel and periodically flooding.

The owners replaced an irrigated field with native plants like Great Basin wild rye. Already wildlife like sage grouse and bighorn sheep use this area.

Perhaps surprisingly, geese like the long grass, too. It provides perfect cover for nesting. Look closely in the photo above: you can see a nest tucked into the base of the wild rye.

In the years to come, it will be interesting to see what other wildlife nests, hides, feeds, hunts or rests in this restored oasis in the desert 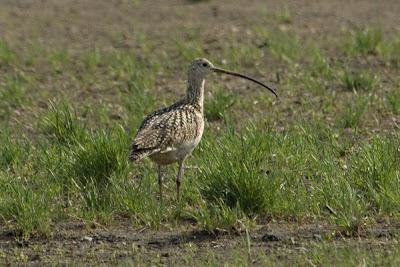 He visited en route to Carey (as part of a successful trip to see the hooded crane), and found many interesting species. Birding has become increasingly popular at the preserve, and spring is an excellent time to visit.

I'm glad this blog is encouraging folks to visit the preserve. If you have written trip reports or blog posts about our preserves, please send them and I'd be happy to link. (And if you're looking for trip ideas, check out our Idaho public access guide).

By the way, the Idaho Birding Blog is an excellent resource, with birder interviews, book reviews, trip reports, great photographs and more.
Posted by TNC-Idaho at 1:38 PM 1 comment: 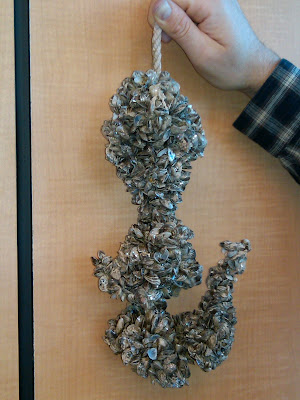 The above photo is of a rope encrusted with quagga mussels, a non-native species that is spreading across the country.

These invasive mussels coat everything from boats to power turbines. They destroy wildlife habitat and cost millions to control.

The first stations to open in the state will be near the intersection of Hwy. 51 and Hwy. 78 near Bruneau and on Hwy. 95 near Marsing. A station at U.S. 93, just north of the Nevada state line, will open on Saturday, May 1. Additional stations will be opening statewide throughout the boating season. The stations will be open from 7 a.m.-7 p.m., seven days a week.

Boaters should expect inspections! The purpose of these stations is to inspect watercraft coming from outside of Idaho. Watercraft inspectors will be looking for high-risk boats that have been in quagga mussel- and zebra mussel-impacted states. Boats will be inspected for any attached mussels and/or standing water. Owners also will be asked where they have boated in the previous 30 days. It is important that boaters arrive in Idaho with a clean, drained and dry watercraft.

ISDA urges all boaters to take the following steps to prevent the introduction of the mussels to Idaho:

--Inspect all exposed surfaces - small mussels feel like sandpaper to the touch.

--Remove all plant and animal material.

--Drain all water and dry all areas.

--Clean and dry all live wells.

--Empty and dry any buckets.

--Dispose of all bait in the trash.

For more information contact Amy Ferriter at 208-332-8686 or email at amy.ferriter@agri.idaho.gov