Paul Vang, an outdoor writer from Butte, Montana, filed this report in the Butte Weekly on his recent trip to Silver Creek:

It’s a stream full of history, with a cast of characters including Nobel Prize winning authors, movie stars and railroad tycoons. Thanks to The Nature Conservancy, it’s also a stream that offers ordinary people the opportunity to try their luck at this famous spring creek, which many describe as a graduate school for anglers.

More on that in a moment.

At the invitation of Matt Miller, an outdoor writer friend and public relations director for the Idaho branch of The Nature Conservancy, I, along with several others, spent several days trying our luck on Silver Creek.

Trout, we are told, have a brain the size of a pea. For being primitive creatures, they certainly can get well educated, especially on Silver Creek. They have to be, as they see thousands of anglers and every kind of fly that they can throw at them. Besides anglers casting imitation bugs, the fish also have to be aware of herons and other predators.

Still, fish thrive in Silver Creek. They feed on a rich diet of aquatic insects, terrestrials, such as grasshoppers and ants, plus the occasional mouse that blunders over the stream bank. They’re used to anglers wading clumsily in their midst and, by and large, know the difference between real and fake. E. Donnall Thomas, Jr., a writer and physician from Lewistown MT wrote of his visit to Silver Creek in the July/August 2007 edition of “Northwest Fly Fishing” magazine. After two hours of casting various flies, he caught a 17-inch brown trout. “On Silver Creek,” he reports, “this is nothing less than a triumph.”

Silver Creek’s modern history began in the 1930s, when Averill Harriman, a railroad tycoon, and later a distinguished diplomat and adviser to presidents, established Sun Valley, so he’d have a destination ski resort on the route of the Union Pacific railroad. In order to provide recreation attractions for the off-season, he bought up property along Silver Creek and then invited celebrities such as Ernest Hemingway and Gary Cooper to come to Idaho and sample the fishing, as well as hunt for pheasants and ducks along the stream.

In the 1960s, the Union Pacific sold Sun Valley, and in the 1970s, it went on the market again. Jack Hemingway, the then-deceased author’s son, had settled in the area, and served on the Idaho Fish & Game Commission. Hemingway learned of the impending sale and approached The Nature Conservancy about purchasing the Sun Valley Ranch property on Silver Creek. The Conservancy acquired the property in 1976, and now owns 850 acres along the stream as well as conservation easements on areas not in the Silver Creek Reserve.

Though the Conservancy could probably operate the stream on a pricey pay-to-fish basis, they maintain the Reserve as a public fishing area, open to all comers. They simply require that anglers sign in at the Visitor Center. You might have to walk a little way to find a stretch of stream without other anglers, but wherever you go, you’ll find fish. In addition, they offer guided and self-guided nature walks and educational programs. In this green oasis in the high desert of central Idaho it’s an area teeming with wildlife.

So, how did I do? In an evening session after arrival, I came up empty-handed. The next morning I had a couple momentary hookups but the fish quickly shed my hook and went their own way. That afternoon, while most of the rest of the group took a side trip to the Big Wood River, I elected to stay behind to fish the creek. I was rewarded with two 16-inch rainbows that came up to a ‘hopper imitation. The next morning I was striking out during the trico hatch, but noticed Pale Morning Dun mayflies floating down the stream’s gentle currents. I changed flies and quickly caught a rainbow—almost a clone of the previous day’s trout.

One some streams, we might have been disappointed with those results. On Silver Creek, we claim victory and put PhD after our name.
Posted by TNC-Idaho at 10:11 AM No comments:

A new public radio series sponsored by The Nature Conservancy and VISA--Stories from the Heart of the Land--debuts this August with five stories from some of the country's best radio producers. Hosted by Jay Allison, the series ranges around the world--from Australia to Newfoundland, Mexico to Tibet--to capture the human connection to land and landscape.

Listen as Elizabeth Arnold goes face to face with a grizzly bear, ponder taxidermy at the American Museum of Natural History, or join a biking expedition on Western back roads.

The Idaho Chapter has also had its own public radio series for the past five years, Off the Trail with Jyl Hoyt. You can catch this series every Friday on Boise State Radio, or listen on-line to all the latest stories.
Posted by TNC-Idaho at 3:45 PM No comments: 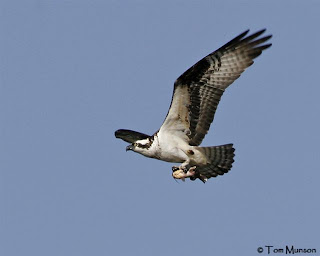 I've seen it many times, but it's still a dramatic sight: An osprey flying overhead carrying a flopping fish in its talons. In the late spring and summer, I can count on seeing ospreys most days along the Boise River Greenbelt. They're a common sight all along the river, and a pair are even nesting this year at the Boise Hawks Stadium. Across Idaho, wildlife viewers can see them at many Nature Conservancy preserves.

Just a few decades ago, things didn't look quite so rosy for ospreys. The widespread use of DDT had decimated populations, and they were on the endangered species list. The recovery came rapidly. In 1984, I saw my first osprey as a kid on a fishing trip to Canada--a special and rare sight. It's still a special sight, just a much more common one. And it's a testament to what conservationists can accomplish.

The harpy eagle may be one of the world's most dramatic birds, with a six-foot wingspan, a crested head and a propensity to pick off monkeys for dinner. Like the osprey in the 1950's, the harpy eagle has been in decline. Seeing one is a rare sight, something birders arrange complicated trips just for the chance to catch a glimpse. Recently, a harpy eagle was found in Belize after being absent for more than 50 years. Now The Nature Conservancy is leading an effort to restore harpy eagles to the Belize Mayan forests. The Conservancy is working with partners to restore habitat, and reintroducing eagles with the help of the Belize Zoo. Here's hoping that someday that harpy eagles have returned to the Belize landscape in the way that ospreys have returned to Idaho.
Posted by TNC-Idaho at 9:52 AM No comments: