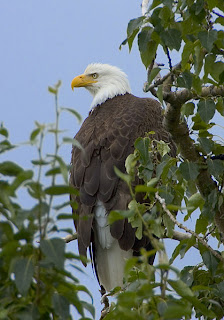 Eagles everywhere: Iowa may be known for its cornfields, but during my holiday travels to my in-laws' farm in the northeast corner of the state, it was the bald eagles that held my interest. Literally every excursion outside yielded multiple sightings of this beautiful bird.

Just a couple of decades ago, seeing an eagle anywhere was an exciting event.
By the 1960's, the population in the contiguous United States was down to 412 breeding pairs. The recovery of the bald eagle population is yet another conservation success story, another reason for hope when faced with today's daunting environmental challenges.

The banning of DDT, stronger penalties for illegal shooting and habitat protection all benefited our national bird's recovery.

And what a beautiful bird a mature bald eagle is. It's well known that Ben Franklin opposed the eagle as the national bird--suggesting instead the wild turkey--allegedly due to the eagle's carrion eating ways. In reality, Franklin probably stated this in jest.

But it is true that the eagle is not picky in what it eats. In Iowa, for instance, it dines on white-tailed deer gut piles and road kills--inevitable with the state's absolutely exploding deer population. It will also dine on dead hogs left in the field from factory farms. For some reason, scavenging has always seemed to humans as being somehow less-than-noble, but conservationists recognize the vital role nature's clean-up crews play in any ecosystem.

Winter is a great time to see eagles in Idaho, too. Look along any open waterways, from the Boise Greenbelt to the South Fork of the Snake to Silver Creek. No matter how many times you've seen one, an eagle soaring overhead remains one of nature's most striking sights. --Matt Miller

Watch The Nature Conservancy's interactive slide show on bald eagles.
Posted by TNC-Idaho at 9:47 AM