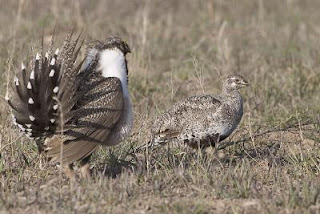 Idahoans love their national forest, but most don't know we also have a national grassland: the Curlew National Grassland located in southeast Idaho. The 47,000 acres of public land are open to hiking, birding, hunting and photography.

To visit and learn more about this area, join the Curlew Grassland tour on June 13 at 9 a.m. Visit interesting sites and discuss grazing, burns and wildlife on the grassland.

Lunch speakers include Ken Sanders from the University of Idaho, Ken Timothy from the US Forest Service and Howard Horton from Agricultural Research Service. 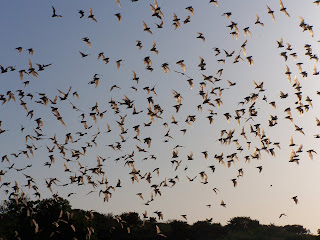 For centuries, people responded to bats with superstition, fear and hatred. Upon finding bat caves in North America, many Europeans lined up along the entrance with shotguns--or dynamited them.

Fortunately, today people have grown to appreciate bats and the tons of insects they consume each night--a valuable ecological service. Instead of dynamiting bat caves, people now visit them to enjoy one of the great natural spectacles on earth.

I've seen some interesting bat emergences in Idaho, at the bat boxes of Ball Creek Ranch and in small caves in Hells Canyon. But the world's greatest bat flights are found in the Texas Hill Country. 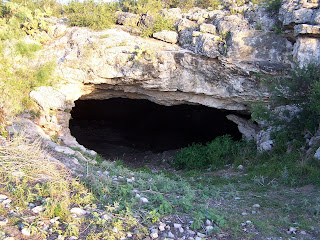 The caves in the Hill Country contain the highest density of mammals on earth--with some caves containing millions of Brazilian free-tailed bats. The Nature Conservancy has protected important bat habitat here, including at the Eckert James River Bat Cave Preserve. At dusk, the cave is quiet save for cave swallows darting around. But before sunset bats start streaming out. 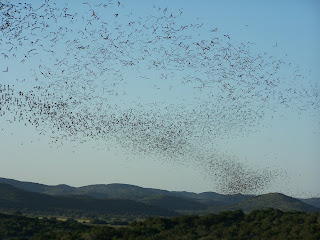 Frio Cave, where my dad and I recently visited, is home to 10-12 million free-tailed bats, plus a few hundred thousand myotis. Seeing them emerge is an astounding sight; within minutes bats stretch literally to the horizon. (As always, you can click on the photos in this blog to see a larger version). They eventually disperse, devouring insects on farm fields and ranches within 100 miles. 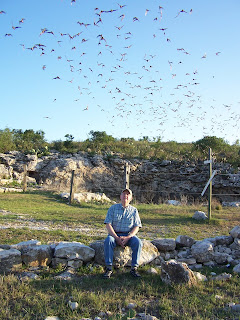 The bats now draw many tourists each summer, each paying fees to private ranches to enjoy the evening bat flight. In fact, many ranches now rely on abundant wildlife to help sustain their operations--through ecotourism, bat tours, birding and hunting. Because farmers recognize the value of bats, their populations are doing well in Texas. But in the eastern United States, thousands of bats are dying--and conservation biologists are trying to discover the cause. 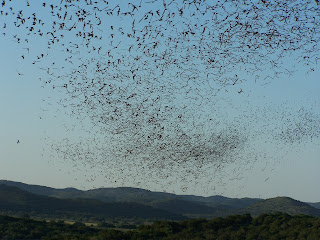 Early settlers reported fires throughout their journey across Texas, but historians now believe the "smoke" they saw were bats emerging from caves. So dense are some swarms of bats that they show up as thunderstorm clouds on radar. At Frio Cave, it takes four hours for all the bats to emerge. It's one of those phenomena that reminds one of the grandeur that still exists in the natural world. --Matt Miller 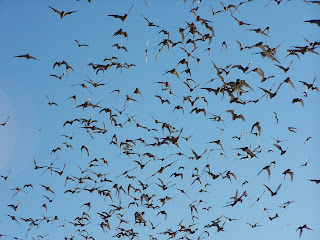 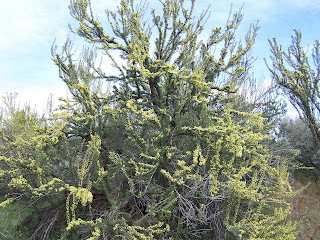 It is not uncommon for people to describe sagebrush country as barren, monotonous or empty. And, indeed, sagebrush can look that way when seen from the interstate at 75 miles per hour.

But healthy sagebrush country actually includes a great mix of plants--not just sagebrush. These including lush grasses, stunning wildflowers and other shrubs, including bitterbrush (pictured above). You may notice the subtle gold of a blooming bitterbrush on a springtime hike in the high desert.

If people don't notice bitterbrush much, deer are quite the opposite. They love it: BLM botanist Roger Rosentretter has called it "deer candy."

In the winter, sagebrush makes up the bulk of a deer's diet, which Rosentretter likens to the "meat and potatoes" of a deer's diet. It's highly nutritious and is in many ways a perfect winter forage.

Sometimes deer love bitterbrush a bit too much. When my wife purchased a bitterbrush plant for our yard, she left the potted plant sitting outside overnight. The next morning, a deer had clipped off the young plant right down to the soil, killing the plant.

Deer will seek out bitterbrush, wherever it is. This can make getting new plants established in xeriscaped yards. In natural areas, the shrubs play an important role in maintaining high desert wildlife populations--Matt Miller 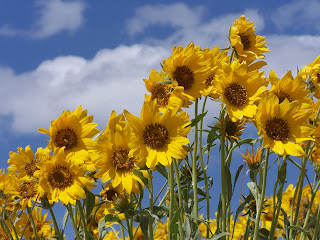 There's a particularly good bloom of arrowleaf balsamroot this spring, at least in areas of southern Idaho where the snow has melted. These beautiful yellow wildflowers--members of the sunflower family, are common on dry hillsides throughout the Rocky Mountain West. There are so many flowers this year that many hillsides shimmer with a golden hue from a distance: 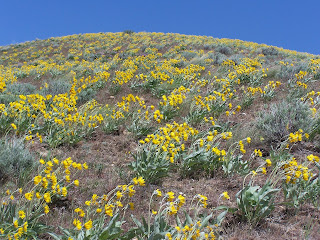 It only took me a few minutes this weekend to walk into patches of thousands of flowers blowing in the breeze. All the photos here are from that short trip (you can click on them to see larger versions). 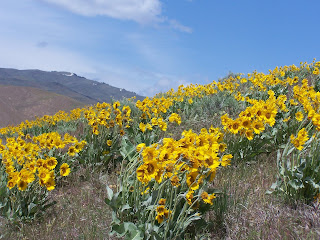 Lewis and Clark described the arrowleaf balsamroot on their expedition, calling them "sunflowers." Native Americans ate every part of the plant, which is quite nutritious. However, much of the plant apparently tastes bitter. The plant was also used as an anesthetic on wounds as well as other medical uses. Xeriscaping and native plant enthusiasts love it, but it is a challenge to raise: it takes seven years to flower. 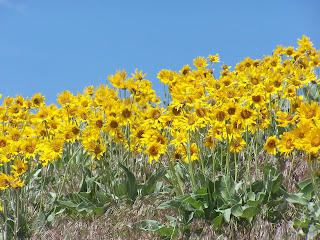 Of course, arrowleaf balsamroot is just one of the many wildflowers that can be found throughout the foothills, sagebrush country and Rocky Mountains. On my walk, many lupines (below) were mixed in with the balsamroot, as well as many other beautiful flowers. 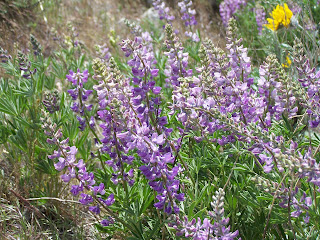 But the balsamroot steals the show. If you'd like to learn more about wildflowers, Silver Creek Preserve offers free wildflower walks at 9:30 a.m. May 14, 15, 17 and 24. Call 208-788-7910 to reserve a spot. The Idaho Native Plant Society offers plant walks in the Boise Foothills throughout May; the next one meets at the Boise Foothills Learning Center on the 15th at 6:30 pm. --Matt Miller 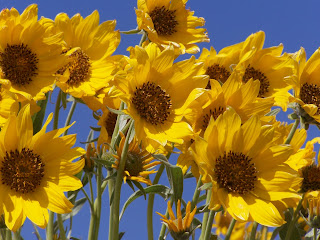 Tilapia in the Snake 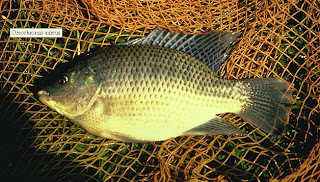 From an aquaculture standpoint, tilapia has much to recommend it: As adults, they're vegetarians, so they require low energy inputs to raise. They are easily raised even in urban tanks, so food production can occur in areas that are already developed rather than degrading natural areas. And they can even be fed vegetable compost, turning household scraps into more food, or even a livelihood. In some African nations, development projects have installed tilapia ponds which are fed by the village's leftover vegetable waste. (A good account of such a project can be found in Mike Tidwell's book, The Ponds of Kalambayi).

But tilapia in Idaho's Snake River? Not so good.

Tilapia are native to Africa, but due to all the good reasons listed above, have been transported for aquaculture around the world. And like many creatures transported to new lands, they inevitably escape.

Actually, they've been there for a while, living in areas near thermal springs. Tilapia need warmer water temperatures to survive, so it's unlikely that they'll spread--unless, of course, water temperatures rise due to a changing climate.

In other rivers around the world, tilapia can become a menace. As vegetarians, they devour all aquatic vegetation, eliminating the base of the aquatic food chain. According to the U.S. Geological Survey, rivers that have abundant tilapia have lost nearly all their native fish.

Will this happen to the Snake? Probably not for now. But with any non-native species, the real impacts are often not apparent until it's too late. Some never become a problem, and may even be beneficial. Others spread rapidly and become impossible to control. New Zealand mudsnails were found in Silver Creek several years ago, but the cold water there is limiting their spread. In other streams, they have crowded out much of the native invertebrates, and thus, the fish.

The easiest way to stop the spread of such species is to prevent their introduction. But that is difficult in a global society. And anywhere where non-native creatures are raised, there's always the risk that they'll escape. The tilapia is already likely a permanent part of Idaho's aquatic fauna. The question is: Just how much a part will it be? --Matt Miller
Posted by TNC-Idaho at 12:01 PM No comments: