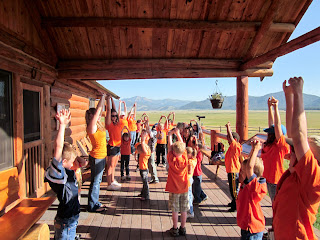 On Wednesday, August 3rd, the Flat Ranch came alive with the laughter, squeals and high energy of 24 children from the Smokey Waters Day Camp, offered by the town of West Yellowstone's summer recreation program. The program meets daily Monday through Friday, but Wednesdays are set aside for out-of-town field trips.

As the children streamed off the school bus and onto the porch of the Flat Ranch visitor center, they were asked why they were all wearing orange shirts. The children replied in unison, "So the counselors can find us!" Sounds like these counselors have a bit of experience with kids. Four counselors joined the group for this outing.

Before starting off on their nature adventure, the children gathered on the porch and did stretches. Arms, legs, backs and torsos stretched and twisted to get ready for the hike. The lead counselor then had a question and answer session to see how many of the kids knew about the importance of conserving nature. First question to clarify was, "What is conservation?"

Everyone came prepared with bottled water and a lunch to eat at the end of the hike. As they marched across the yard and out the gate, the counselors started pointing out the different wildflowers—looked like they were already learning something. The group hiked to the Henry's Fork Outlet, which flows through the Flat Ranch, and had fun learning about local birds and wildlife. After the hike, they returned to the Visitor Center to enjoy their picnic lunches on the porch.

The Nature Conservancy encourages school groups to visit the Flat Ranch. Although there is no structured program, there is a "hands on" display in the Visitor Center where children can touch and feel animal skins, bones and antlers. The grounds are always open for hiking, birding, fishing, picnics and wildlife viewing. No reservations are necessary, but advance notice is appreciated. The visitor center is open Tuesday through Sunday (closed Mondays) until early October. For more information, call the Flat Ranch Visitor Center at (208) 558-7629. 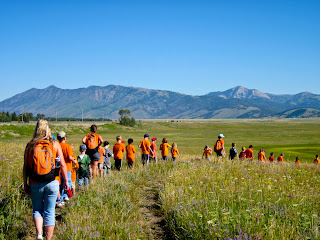 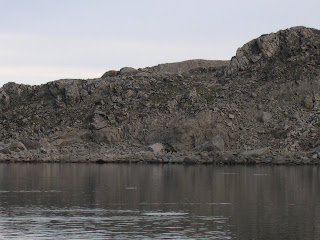 Last weekend I was backpacking and fishing in the Pioneers. From Copper Basin I hiked up Broad Canyon to Goat and Baptie Lakes in hopes of catching cutthroat, golden trout and grayling.

Saturday night just before dusk I noticed a large mammal across Goat Lake where I was camped. At first I thought it was an otter when it popped out of the water, but as it loped along the shore I grabbed my monocular and there was no mistaking it as a wolverine—my first sighting ever! I watched it for 15 minutes as it did a semi-circle around the 150 acre lake. It came closer, to 120 yards looked at me and kept going.

It ran effortlessly up a rocky moraine and disappeared. I ran uphill to get a closer look and couldn't find it. Walking back to camp I spotted it hunting along the north shoreline. It saw me and headed up the steepest slope and over the top toward Betty Lake. Man that critter could climb and without a sound on the loose rock.

Sunday morning he was back again about 9:00 across the lake! I watched him for 10 minutes as it summer-saulted twice down the snowy bank and then rolling on his back in the snow; reminded me of a dog playing. Very cool to watch! Afterward he again glided uphill with ease toward Standhope Peak and disappeared.

I got a few lousy photos as my camera batteries were dying. I had been taking snaps of the cutthroats I caught and the scenery that day so you'll have to forgive the distant shots of the critter. You might have to zoom in to see him. 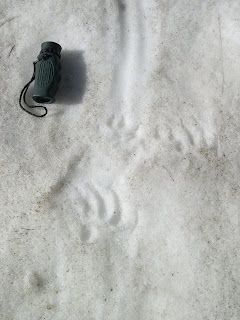 Anyway, my biologist training kicked in, and I scurried over to where I saw him playing in the snow. Surely he left a few hairs in his tumbles down the snow fields. I was able to get one battery to hold a charge long enough to photograph a few tracks in the snow. With my Ziploc bag, I surveyed the snow for any hair, blood, scat I could find. I must have looked for 20 minutes in that one snow patch-- not a stinking follicle.

Understand that Idaho biologists use winter hair traps to snag a sample strands from a baited area. From the hairs they can work up the DNA fingerprint of that individual and identify it if they have previous hair samples from him. They keep records of each critter's home range and when/where he's been. Across all of Idaho, Wyoming and Montana they estimate 28-52 wolverines so to see one is really rare!

I wanted to relate this story given the Conservancy's work across the Pioneer Range. This area is near-and-dear to me. I think the opportunities to preserve and protect these vast expanses of wildlands are critical for rare species like wolverine.

P/S: Have you voted for your favorite image to grace the Silver Creek Preserve 35th Anniversary poster yet? Voting ends this week!

Join us this weekend for a free film screening of National Geographic's "Moose: Titans of the North." See you there! 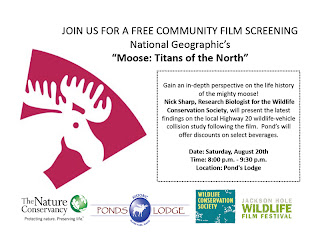 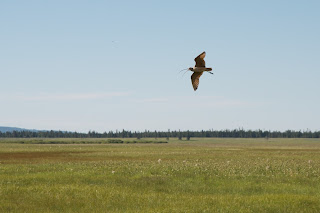 In an effort to better understand the specific habitat features required by this species, Idaho Department of Fish & Game biologists visit the property several times throughout the summer to monitor curlew population numbers.

An initial survey in June turned up 100 individual birds, most of which were displaying breeding behavior. “This is the largest concentration of long-billed curlew that we know of in the Upper Snake Region and is a very significant population for Idaho," noted IDFG Regional Biologist Rob Cavallaro.

About 40 curlews were spotted during the second survey on July 11. These lower numbers do not necessarily reflect a loss of birds, but rather indicate changes in behavior.

Once curlews have laid their eggs, the female sits on the nest, remaining low and flush to the ground to avoid predation.

When broods hatch, the birds move to cover, sticking to tall grasses, and shrubs. We noticed during our July survey that many of the birds were located in tall Wyethia (mule's ear).

On occasion, birds with broods will mob a perceived threat, and dive bomb the trespasser. Though we did not experience this mobbing behavior, we did witness one perturbed curlew fearlessly chase two adult bald eagles.

Thanks to Rob Cavallaro and his crew for leading the charge on these intensive surveys, and for teaching Flat Ranch staff so much about this rare and imperiled species. 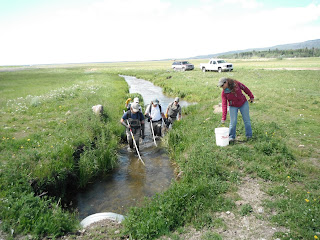 Where to begin? July has flown by and so much has taken place in so few weeks. Here is the latest news from The Nature Conservancy's Flat Ranch Preserve.

The Flat Ranch Preserve and neighboring private and state lands keep cows watered through the use of irrigation ditches that divert water from the Henry's Lake Outlet. Fish from the outlet sometimes swim into these shallow, exposed artificial channels, which may lead to fish kills when temperatures rise in late summer.

The Nature Conservancy strives to employ ranching practices that are compatible with healthy fisheries, such as erecting electric fence around streams and creeks to keep cattle from eroding banks.

In an effort to better understand the impact of these ditches on the outlet, the Flat Ranch and several local fisheries groups, including the Henry’s Fork Foundation and Idaho Department of Fish and Game, collaborated to electrofish these artificial waterways to take inventory of what is or is not living in our ditches.

An initial sweep through the West and East ditches on July 13 (when flows from the dam were exceptionally high) revealed Utah chubs, Utah suckers, and minnows (redside shiners).

While trout were not discovered during this effort, the species identified are important as forage for larger fish (such as trout), according to Henry's Lake manager Jessica Buelow. A second session on July 20 produced a single brook trout in the West ditch and similar forage species in the East.

With this data, the Flat Ranch, natural resources agencies, and other nonprofits will be better able to determine if steps need to be taken to install fish screens or fish returns on the ditches. More data will be collected in August and September to generate a broader picture of what species are using the ditches during various flows and at different times of year. 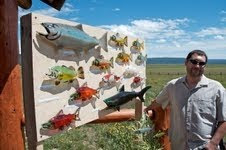 The porch of The Nature Conservancy Flat Ranch turned into an outdoor "gallery" of nature art on Friday, July 22 and Saturday, July 23.

Twelve regional artists displayed their talents, ranging from willow furniture, glass fish and watercolors to inlaid wood work and even greeting cards made from bison dung!

Adding to the festive atmosphere was lovely harp music, played by 12-year-old Sarah Close of Rigby.

Visitors to the show were also treated to gourmet refreshments such as palmiers, cookies, and homemade cherry lemonade, provided by The Henry's Fork Lodge (Island Park), Reel Food on the Fly (Cameron, MT) and the Tawny Moose (Ashton).

With the warm summer weather, wildflowers in bloom throughout the yard, the harp music drifting through the air and the chatter of artists and visitors, it was the perfect venue for an art show with a nature theme.

Check back for more Flat Ranch updates on this blog, including the latest on the curlew counts and the installation of a canoe gate. 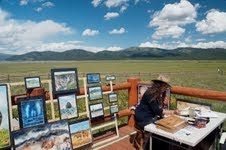 This year, you get to decide the winning poster image. Below are the seven finalists chosen by our Silver Creek staff. One of these seven images will be selected for use in the Silver Creek 35th anniversary poster. You can click on each image to see a larger version of it.

To vote: email Dayna Gross with the subject line "Poster Contest" and include in the email body the number and name of your poster. Enjoy the photos, and email your vote!

1. Flowers by the creek, Laura Speck 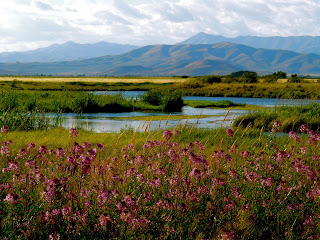 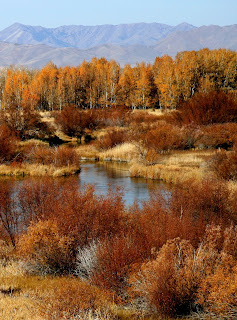 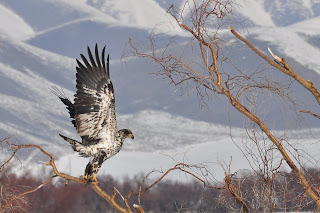 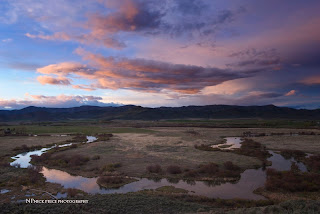 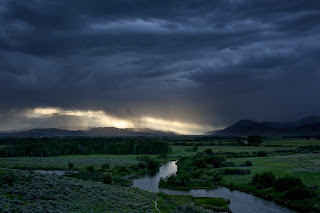 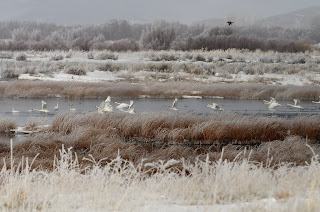 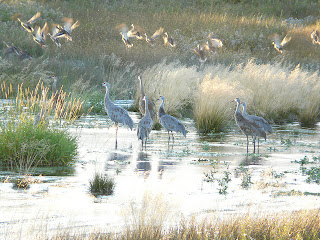