Last Child in the Woods

" Kids today can tell you many facts about the Amazon rainforest, but they can't tell you about the last time they went out in the woods." --Richard Louv, author of Last Child in the Woods: Saving our Children from Nature Deficit Disorder

Richard Louv begins each of his talks by asking his audience to think of their special childhood places, the places where you first encountered the natural world. For me, an easy task: The woodlots and fields behind my home in northcentral Pennsylvania. These areas--not wilderness, but full of wild creatures and places of adventure--were central to my childhood. Nearly every day, my brother and I explored the hills, caught grasshoppers and crayfish, built dams on streams, tracked deer and just generally rambled about. The first day of deer season was an official school holiday, one that many of us spent months dreaming about. In the winter, the hills were packed with families out for an afternoon of sledding. Most days, an informal game of kick ball could be found, and if not that, then certainly plenty of bike riding.

It all seemed so normal, then. Louv, who spoke last week at the annual Outdoor Writers Association of America conference, knows that many in his audiences had these kinds of experiences. But that is no longer the norm. The fact that kids are no longer spending time outdoors is hardly news, and the signs of it are everywhere. National park visitation is down. Same for state park visitation. Sales of hunting licenses are dropping dramatically. Bike sales? Down 30%. Conservation organizations? Average age of members keeps growing older.

Some consider all this to be nothing more than misplaced nostalgia--with stories like mine corny, cliched, uncool testaments to that fact. Louv disagrees. He sees a direct correlation with the disconnect from the natural world--which he calls "nature deficit disorder"--to the spike in childhood obesity, depression and attention deficit disorder. At a time when enrollment in organized sports is the highest in recorded history, the rates of childhood obesity are also the highest in history. Unorganized, outdoor play is important. But how to restore it?

The reasons are numerous and complex, but Louv is not content in blaming video games, television and the usual suspects. Instead, he believes that "stranger danger" plays a significant role: Parents are adverse to allowing their kids to roam the woods out of fear of abduction. Media reports indicate that this is a real fear, but the reality is that the chance of childhood abduction by strangers is no greater now than in the 1950's. These are individual tragedies, but a child today is still more likely to be killed by falling down the stairs.

The return to unsupervised play, though, is not easy. However, kids can be introduced to the outdoors with parents, and there are new programs to find ways to connect youngsters with the natural world. Perhaps no issue is so important for conservationists today, for if no one cares about open spaces and running waters and frogs, then all our conservation work will have been for naught. Louv's book has become a phenomenon, and it's starting the conversation: Now we just have to make sure there isn't a "last child in the woods."--Matt Miller, blog editor
Posted by TNC-Idaho at 12:51 PM No comments: 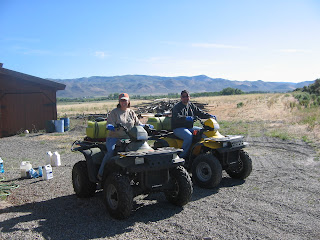 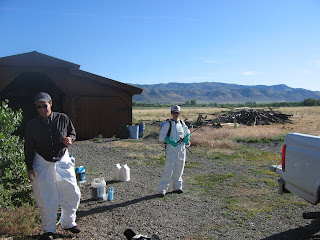 Weeds are a problem for most landowners in southern Idaho. At Silver Creek Preserve the most prevalent noxious weed is Canada thistle. Being difficult to kill and spreading quickly through seeds and rhizomes, we try to spray and mechanically remove this weed in the spring and fall. Silver Creek Preserve had its annual spring 'Spray Day' and were fortunate to have volunteers from neighboring ranches and other organizations in the Wood River Valley, such as the Wood River Land Trust, the Blaine County Weed Department, and the Idaho Department of Fish and Game.
Heading out with backpacks and 4-wheelers, a great deal of area was covered and sprayed primarily for Canada thistle. These organizations also have their own weed spraying days, to combat weeds on their lands. Also, on June 19th, Silver Creek Preserve hosted 'Weed Night,' and were lucky to have a presentation by Ron Thaemert of the University of Idaho extension office in Hailey. Ron described the common noxious weeds and treatments and gave an overview of the 21 new noxious weeds in Idaho. Please look into controlling weeds on your property to conserve native plants and biodiversity!
Posted by TNC-Idaho at 3:02 PM No comments: 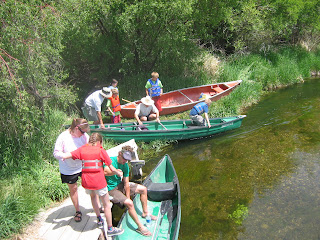 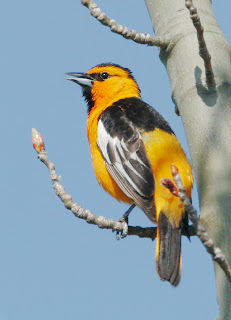 Chatter, chatter, chatter: As you walk along a creek or river this June, you might hear this loud song coming from the thick vegetation and trees that line the water's banks. Look closely, and you might see a flash of orange or yellow, the tell-tale sign of a Bullock's oriole. One of Idaho's beautiful birds, the orioles are particularly active at this time of year.
Good places to see them include Silver Creek Preserve (especially in the area right around the visitor's center), in vegetation along streams in the Owyhees and along the Boise River Greenbelt. 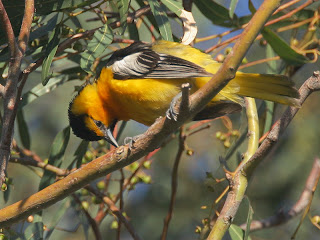 A quarter of all species gone by 2025? Such a loss could be reality if climate change is not addressed. The Nature Conservancy is addressing this major threat to wildlife around the world through collaborative, market-based solutions.
Check out this interactive map of climate change's impacts on wildlife and habitats around the world. And calculate your own impacts on climate change--and how you can make a difference--with this carbon calculator.
Posted by TNC-Idaho at 10:37 AM No comments: