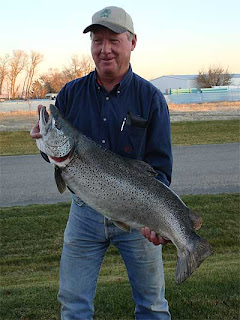 Big trout have been in the news a lot lately. Near the end of 2007, 16-year-old Jake Cecil landed an estimated 23-pound rainbow trout in the Boise River. If Jake hadn't gutted the fish, it would likely have been the new state record. Earlier in the year, a new Idaho state brown trout record (above), was set when Wes Case caught this 37-inch, 27.3 pound fish in the Ashton Reservoir of eastern Idaho.

The brown trout is not native to the United States. But this species was so popular among sport anglers in the U.K. and continental Europe, they couldn't resist stocking trout far and wide. That's why, today, you can catch a brown trout in Argentina, New Zealand, India, Kenya and many other places around the globe. This has undoubtedly impacted native fish, and today seems ecologically irresponsible. But the brown trout is here to stay.

And some of these trout grow huge, especially in reservoirs. Mr. Case's new record had two hatchery rainbow trout ten to twelve inches in length. Obviously such new food sources allow the long-lived brown to put on substantial weight.

But what about in an unstocked stream environment? How big can brown trout get there?

Typically, trout do not grow as large in streams. But in a stream with plenty of insects and trout to eat, browns can grow quite large indeed.

Silver Creek is not stocked, but is biologically highly productive. One has only to experience one of the stunning mayfly hatches--and the trout feeding on those insects--to see just how conducive this stream is to trout. The trout count remains one of the highest in the country.

With all this food, the trout can grow very large--and become very hard to catch. Anyone who has fished the preserve's Sullivan's Pond--also known as the "shark tank"--has seen the monstrous fish swimming by, seemingly oblivious to any fly tossed at them.

But every year, anglers do land the big ones. While no official records have been taken, the largest we've seen is this one: 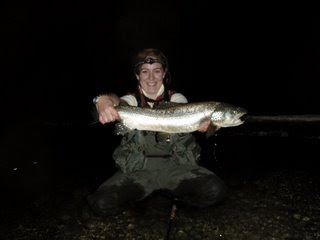 Former Silver Creek intern Morgan Buchert caught this 33-inch fish in 2006. While it's known the trout was caught at night, exactly where and how have remained Morgan's secret. There may very well be larger fish in Silver Creek.

But for most of us, these huge ones are always just out of reach. You never know, though. Every time you fish Silver Creek, there is that chance for a truly big one. The fish are there. You just need to figure out how to catch one. You have five months until opening day to dream up that perfect pattern and that perfect strategy for this year. -- Matt Miller