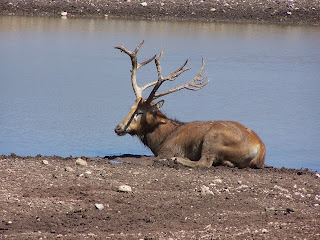 No, you won't find the animal pictured above roaming around the wilds of Idaho.

In fact, you won't find it roaming in the wild anywhere.

The Pere David's deer has been extinct in the wild for more than 1oo years. Native to China, the deer is believed to have once roamed sub-tropical marshlands in large herds. When French missionary Father Armand David visited China in the 1860's, only one herd was known to be in existence--on a game reserve owned by the emperor.

As is often the case with small numbers of animals on a small preserve, this isolated population of deer was vulnerable. They were all killed off by troops during the Boxer Rebellion.

However, some Westerners had illegally smuggled out a few individuals of Pere David's deer to stock British deer parks. At the time of its extinction in the wild, about 18 of the species remained at the Woburn Abbey deer park.

The Pere David's deer probably won't go extinct now. It does best in fenced reserves that offer marshy habitat. I took this photo on a Texas game ranch, where herds of Pere David's deer thrive. They can roam over fairly large areas, a fate certainly better than extinction.

But it's unlikely we'll ever see this species as a free-roaming population. A few have been reintroduced to a Chinese reserve, but the deer remains an animal of fenced, highly managed preserves. In essence, it's a living museum piece.

We can only guess what it was like to see Pere David's deer grazing in its native marshland habitat. We don't know how it dealt with predators, or how many lived in a herd.

Large mammals often fare the worst from the many threats posed by humanity--habitat fragmentation, poaching, deforestation, climate change. In the next century, many of our most iconic animals could join the Pere David's deer as living museum pieces--the black rhino, the mountain gorilla, the tiger, the panda, the polar bear.

But there's still time. Reintroduction programs offer hope for some species, like black-footed ferrets, but it's more cost-effective to save habitat now.

In the Northern Rockies, all the wildlife species that were here when Lewis and Clark explored this area are still here. You can still see herds of elk and mule deer, racing pronghorns, grizzly bears--one of the great concentrations of large mammals left on the planet.

As the West grows, we can create a future that includes these animals as part of the land, and part of our lives. But that will require conserving large landscapes. That's why projects like the Montana Legacy Project, of which The Nature Conservancy is a partner, are so vitally important. This project just announced the protection of 320,000 acres of forestlands in Montana, protecting some of the most important habitat in the "Crown of the Continent" ecosytem.

With projects like these elk and grizzly bears will remain a real part of our heritage, not objects in a museum. --Matt Miller
Posted by TNC-Idaho at 10:31 AM No comments: 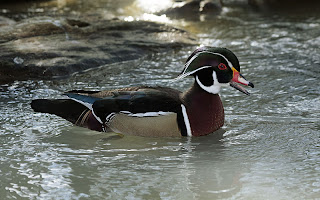 It's not difficult to find baby waterfowl at this time of year: Check out any pond, river, nature preserve or city pond, and you're likely to see large numbers of Canada geese and their young, or mallard ducklings eagerly following their mama.

Look a little more closely along wetland areas, and you are likely to find other species as well. If you're along a wooded stream, you may be rewarded with a sight of a hen wood duck and her young. If the ducklings seem a bit disoriented, consider that, just yesterday, they may have been eggs high up in a tree. Soon after they are born in tree cavities (or nest boxes), baby wood ducks climb out and "parachute" to the ground, then follow the hen to water.

Wood ducks can be found anywhere where trees grow near streams, rivers or wetlands. They are quite common even in downtown Boise during the summer. But when you see a wood duck, consider yourself lucky. After all, in the late 19th century, many prominent ornithologists believed the wood duck would soon go extinct.

Over-hunting and loss of habitat--particularly old, dead trees in which to nest--seemed insurmountable problems at the time. Visionary conservationists like Theodore Roosevelt helped pass tougher wildlife laws, which nearly eliminated the commercial trade in waterfowl and other game. Wildlife can nearly always recover from overharvesting, given adequate enforcement of existing laws.

Habitat is more difficult to restore. Fortunately, everyday citizens across the country came to the wood duck's aid by building nest boxes in likely areas. Duck hunters, birders, youth groups and others built thousands of nest boxes. My brother Mike and I built waterfowl boxes for our Eagle Scout projects, and many other kids will get their first taste of hands-on conservation by building these boxes.

Of course, many wildlife species need more than nesting boxes to survive. That's why The Nature Conservancy's work to protect the most important habitat around the world plays such a vital role in preserving the nesting, feeding, breeding, young-rearing and migration areas that wildlife need to survive.--Matt Miller 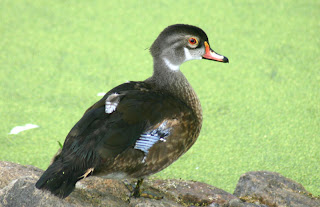 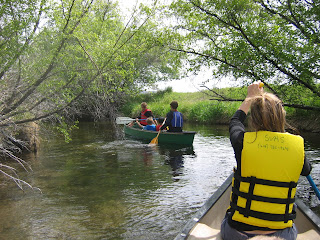 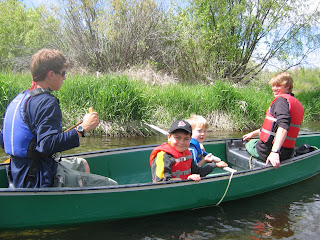 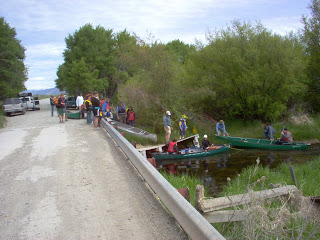 This past Monday some three dozen children with Sun Valley Adaptive Sports were given the chance to enjoy a canoe trip and nature walk at the Silver Creek Nature Preserve in Picabo, Idaho. Sun Valley Adaptive Sports is a program that gives people with disabilities the opportunity to experience a wide variety of sports and activities that help them to develop self-confidence and social skills while having fun.

After enjoying the abundant wildflowers and colorful songbirds on the trails surrounding the Visitors’ Center, the children set afloat at Stocker Creek (see photo) for a leisurely ninety minute drift through the lush habitat of Silver Creek. Despite the interruption of a nine-canoe flotilla, the fly fishermen waved and smiled at the children, and everyone was able to simply enjoy the sunny weather and the striking beauty of the area.

While there were a few tipped canoes, some drenched volunteers, and one slightly wet cell phone, it was a fun and fulfilling day for all. Experiences such as these are vital for developing a connection to nature in the next generation, that they too might be committed to its preservation. Of course, they can be good for this generation too - there’s nothing like seeing a child light up at the sight of a yellow warbler flashing past to remind me why this is the work I choose to do.--- Ryan Urie, Silver Creek Preserve Intern
Posted by TNC-Idaho at 6:03 PM No comments: 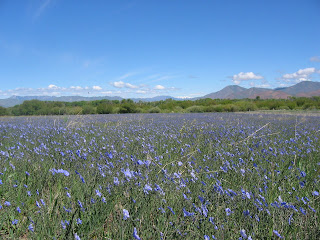 Controlling weeds can feel like an uphill battle (quite literally, in steep places like Hells Canyon). After they've been eliminated, all too often they reappear in the same places the next year. That's why restoring native plants is such an important component of The Nature Conservancy's work.

The field above, situated behind the preserve office at Silver Creek, was covered in weeds several years ago--offering very little for wildlife and threatening to spread to other areas of the preserve.

Working with partners, the Conservancy tilled the area and replanted it with flax and native plants. The flax fixes the soil by adding nitrogen, important because non-native weeds often leave the soil depleted. The flax blooms early and takes over; it's the blue flowers in the picture you can see above. It is also used by a number of bird and beneficial insect species.

Although you can't see it in the field of blue, below the flax are many native grasses. As they grow, they eventually will become the dominant plant. The flax is just buying those plants time, and creating better soil conditions.

Restoration takes time, but it is easier to restore a small area like the field above than try to restore thousands or millions of acres. The field of blue flowers signals that this area will soon welcome the return of native grasses. --Matt Miller
Posted by TNC-Idaho at 12:18 PM 1 comment: 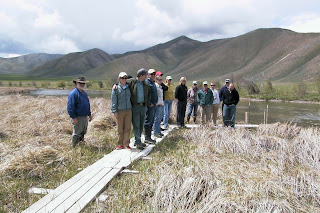 On May 29th and 30th, the Nature Conservancy hosted a diverse and amazing group of scientists, academics, consultants, and agency folks at Silver Creek for a Spring Creek Summit.

Despite the unique nature of spring creek ecosystems surprisingly little published research is available to guide land managers, the scientific community and the private sector in their management and restoration. Using the Silver Creek watershed as a catalyst, The Nature Conservancy hoped to advance a common understanding of spring creek ecology, hydrogeomorphology, and fisheries to help guide long-term management decisions and elevate the "state-of-the-knowledge" in the Intermountain West. To initiate this process, TNC convened a group of regional scientists, TNC land managers, and private sector consultants in a managed forum, the Spring Creek Summit 2008.

Many pressing issues were discussed with the goal in mind of working towards developing a spring creek habitat assessment tool, restoration guidelines, and monitoring protocols that can provide guidance for landowners and partners engaging in habitat enhancement projects in spring creek aquatic systems. Specifically for Silver Creek, these tools will assist TNC and partners in creating a common vision and understanding for this important watershed.

A summary of the event will be available soon at savesilvercreek.org. 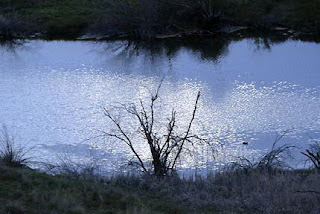 In Samuel Beckett's absurdist play, Waiting for Godot, two characters spend an awful lot of time, well, waiting for Godot. Exactly who or what Godot is never quite becomes clear, but the pair forsake all else to keep on waiting. In the end, of course, Godot never shows.

A trip to fish the brown drake hatch on Silver Creek sometimes feels that way. You get on the water early, sure that tonight will be the night. You watch, and you wait. And wait.

The water is a smooth, glassy surface--not a good thing for a Silver Creek trout angler. You have come for feeding fish constantly smacking the surface. Serenity means the brown drakes are not ready to hatch yet.

At some point, you suspect it's not going to happen this evening. Night falls, and you're still waiting for brown drake.

If you're lucky, the brown drake hatch is one of fly fishing's most dramatic experiences. Thousands and thousands of these large mayflies hover over the water. Wherever there's such an abundance of life, there's sure to be predators feeding. In this case, it's brown and rainbow trout. The fish gorge during the hatch, and they actually lose some of their usual wariness.

The hatch only occurs on the lower portions of the watershed, downstream of The Nature Conservancy's preserve. The brown drake hatch only occurs for a short window of time in late May or early June, and it's somewhat unpredictable.

If you miss the hatch, though, it's still not quite like waiting for Godot. Silver Creek at this time of year is still beautiful, and it's perhaps the best time to see lots of wildlife. This past weekend, friends and I spent a lot of time waiting for brown drakes to hatch, but the rewards were many: A bull moose, a mule deer and a herd of elk, all in the same meadow. Displaying yellow-headed blackbirds and their raucous calls. Hillsides aglow with lupines and arrowleaf balsamroot. Cinammon teal and sandhill cranes and long-billed curlews. Beavers and muskrats. Blankets of stars in the clear night sky. --Matt Miller
Posted by TNC-Idaho at 1:59 PM No comments: