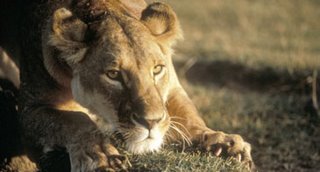 The Nature Conservancy is about to launch its work in Africa, with programs being established in several countries. In this new column, the Conservancy's lead scientist Sanjayan reflects on the fate of a cattle-killing lion in Kenya--and the challenges of private land conservation on this rapidly changing continent.
Posted by TNC-Idaho at 1:11 PM No comments: 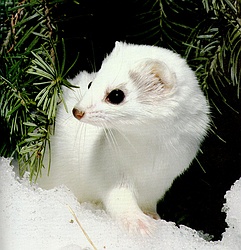 At first glance, it looked surreal, even improbable: A flash of white so pure it made the falling snow appear dirty. The sleek creature flitted through the sagebrush before offering a good look, but suddenly it reappeared only feet away: An ermine.

"Ermine" is the name given to the white phase of the short-tailed weasel. Common throughout North America, weasels are nevertheless difficult to spot. They never exist at high population densities, and rarely reveal themselves to humans. Seeing one in the white winter phase is a rare treat, something I had never seen before.

Short- and long-tailed weasels turn white in latitutdes where they are likely to get snow. This is a genetic trait: Move a southern weasel to Canada and it still remains brown.

While difficult to spot, the ermine is hardly shy around humans. Indeed, this one spent ten minutes circling around my friend and I, often coming within five feet of us for a close inspection. Its silky white coat contrasted with a brilliant black tip on its tail, and two beady black eyes. I suspect it was a "once in a lifetime" sighting.

I spotted this interesting little creature recently was in a wild stretch of land off the Owyhee Backcountry Byway. The area is grazed by cattle but I have rarely seen other visitors to this favorite spot.

At one time, the "sagebrush sea" that covers much of southern Idaho was considered monotonous and barren. But anyone who takes the time to explore sagebrush country knows that it is rich in wildlife. Nearly every visit to the Owyhees brings a new sighting, something unexpected.

That's why The Nature Conservancy is working to protect healthy sagebrush across southern Idaho, including in five-million acre Owyhee County. By working together, we can protect this special place so that future generations can encounter the amazing wild country and interesting wildlife--like the ermine--that is found in the southwestern corner of Idaho.
Posted by TNC-Idaho at 2:59 PM No comments:

An Ounce of Prevention...

This week, the State of Arizona made a most disturbing announcement: Zebra mussels were found in the state. The zebra mussel may only be as long as a fingernail, but it's impact is huge. The non-native mussel not only crowds out native mussels and hoards nutrients, it also exists at such high densities that it clogs boat motors and water-intake valves on power stations.

In the Great Lakes, mitigating the effects of zebra mussels has cost more than $3 billion. That's why finding them in Arizona is so disturbing. If they spread around Western rivers, they could have massive impacts on hydropower, agriculture, outdoor recreation and wildlife habitat.

Once established, invasive, non-native species are difficult to control. Prevention is a much more cost-effective strategy. Protecting native habitats from new invaders is one of the Conservancy's conservation strategies around the world. This week, the Conservancy's Great Lakes program announced a new partnership to prevent new invasive species from entering the lakes.

In Idaho, the Conservancy is using satellite technology to map pristine areas of Hells Canyon and the Owyhees to protect them from weeds, engaging anglers at Silver Creek to stop the spread of New Zealand mud snails and participating in statewide programs to help educate outdoor enthusiasts on how cleaning their equipment can prevent moving weeds from one locale to another.

Education and preventative measures are not always easy, but they're far less difficult and far less expensive than controlling established invasive species.
Posted by TNC-Idaho at 3:14 PM No comments: 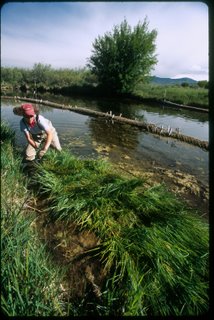 Above: Installation of bio-logs to improve habitat conditions along along St__ker Creek .

What's in a name? Is it Stocker Creek or Stalker Creek? If you are a frequent visitor to Silver Creek Preserve, you know the creek we mean. This tributary stream meets up with Grove Creek on the preserve to form Silver Creek. It is known for its large trout and difficult fishing conditions--and no one can seem to agree on its name.

It's not only the stream: the access road, a Nature Conservancy cabin and a ranch adjacent to the preserve all bear the name Stalker/Stocker. The road--with its sign (Stocker Creek Road)--would seem to solve the issue, but maps and plaques often carry the "Stalker" name.

Over the years, there have been some creative explanations for the name. "Stocker" seems to fit a fishing stream, although all the fish in Silver Creek and its tributaries are wild, not stocked. Some have suggested that "stalker" alludes to the fact that a successful angler on the creek must stalk fish quietly and patiently to be successful. Even a careful angler will put many fish down here.

Alas, a recent look through historical archives has revealed the real source of the name (and the real spelling): The creek was named after an early settler of the area, James Tanch Stalker (1859-1940) who moved to Blaine County sometime in the late 1940's.

So Stalker it is, the road sign nothwithstanding. The names we give places are often full of meaning, and full of memories. Whatever you have called it, make sure you visit Stalker Creek again soon. The improbably huge trout sipping improbably tiny mayflies, the mink darting along the bank, the great blue heron flying to roost at sunset--all are still there, in one of Idaho's most special natural areas.
Posted by TNC-Idaho at 1:32 PM No comments: