A Hooray for Flat Ranch Volunteers 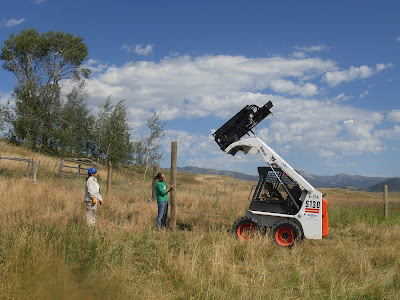 A fun way to help the wildlife and nature of your local area is to volunteer at your local nature preserve. There are lists upon lists of projects to be completed every year, and many call for more hands than we have on our staff. These volunteer days are fun ways to give your time and lend a helping hand to Mother Nature. This summer at the Flat Ranch we had two such volunteer opportunities.

The week of August 18 we built just over a kilometer of four-strand, wildlife-friendly fence. The trick to making a wildlife-friendly fence is making sure the bottom strand of wire is high enough that antelope can run under it without stopping, and the top strand of wire is low enough that larger mammals like elk can jump over it without stopping. The fence posts must also be set a certain distance apart to ensure room for wildlife crossing. Let-own fences are constructed with “runners” and “dancers”. The runners used on the Flat Ranch are 6-7” 8 foot long fence posts spaced 16 feet apart. The dancers are 4-5” 5 foot long posts that are held against each runner with wire. The barbed wire is stapled onto the dancers, and the dancers are laid down every winter when the cattle are not on the ranch. Constructing a fence with this many posts, staples, and exact specifications is no easy task for The Nature Conservancy’s work force. This new fence would not have been possible without the help of our volunteers who worked countless hours in less than perfect conditions to help us build it.

On October 23 we had our second volunteer day at the Flat Ranch. On this day we planted 200 5-gallon willows. These willows were custom grown for the Ranch, and planted to continue our woody riparian vegetation restoration on the Henry’s Fork. This restoration work began as an effort to reduce sedimentation in the Henry’s Fork that was detrimental to the native fishery. With one skid-steer mounted auger, one two-man power auger, shovels, gloves, and a lot of determination, our volunteers closed the final chapter on the active vegetation work. Several of the willows were marked for survival studies that will help in future vegetation work on the ranch. The day went smoothly with all 200 willows in the ground in about 4 hours. It never would have been possible without the help of so many conservation minded people, and I would like to thank everyone who came out and pitched in. --Dava McCann, East Idaho land steward 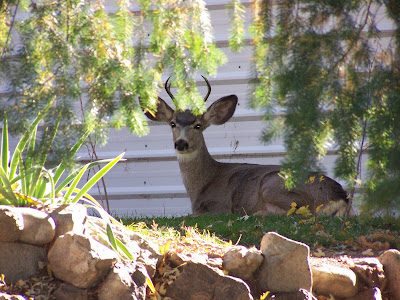 At first, the signs are subtle: A hoof print in your backyard, a small herd of deer moving into the foothills, a solitary animal crossing the road. But, soon, places absent of deer for the past five months will suddenly be alive with them. The deer are on the move, heading towards lower elevations.

The past two blogs have explored winged migration--but throughout Idaho, it's also the season for a hoofed migration.

Each year, mule deer--and elk, moose and pronghorn--migrate from the mountains to the valleys to escape heavy snow. In the low-elevation sagebrush, they find better weather, and, at least in the past, better nutrition and less stressful living conditions.

Idaho is blessed with large tracts of public lands which support animals that need a lot of space to thrive, like mule deer and elk. But many of those public lands are not viable for the animals in the winter and early spring.

Yellowstone National Park, for instance, is known as a haven for wildlife--but its high elevations make it an inhospitable place in the winter. And so big game moves out. Five of the twelve longest large mammal migration routes on earth are located in the Greater Yellowstone area. 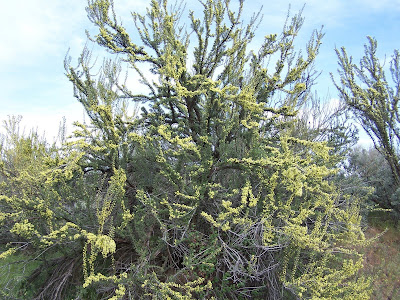 And what do wildlife need when they get to their winter range? Good nutrition, for one thing. Sagebrush is very important to the diets of deer and pronghorn, comprising as much as 90% of winter nutrition in some areas. Bitterbrush (pictured above) and similar shrubs complement this diet nicely. (Some ecologists call bitterbrush "deer candy").

Unfortunately, cheatgrass and other non-native weeds start a fire cycle that eventually eliminates these shrubs. Deer will eat green cheat grass, but it's not as nutritious and often provides very little cover. Some deer herds have disappeared when the sagebrush vanishes, as in the case of the foothills around Twin Falls. 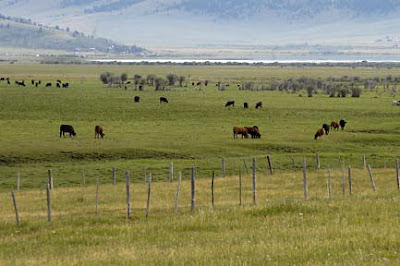 In addition to good, nutritious shrubs, deer (and other big game) need areas free of disturbance. Right now, that often means working farms, ranches and private forests. Many of these lands offer "funnels" for animals to migrate from one public land area to another. As an example, elk and pronghorn migrate out of Yellowstone using a funnel at Henry's Lake, which then leads them to winter range on Saint Anthony Sand Dunes or Montana's Madison Valley. Develop that funnel, and the animals' ability to migrate is in jeopardy.
Big game animals can't burn precious calories during a tough winter, and farms and ranches offer them plenty of space. Cover those lands with houses, and deer suddenly have to contend with more roads, more dogs and more recreation.
The Idaho Working Lands Coalition is dedicated to finding solutions to protect these private lands. The coalition has a new web site, and you can sign up to become a Working Lands Advocate. With your support, we can work towards providing incentives that keep farmers, ranchers and forest owners on the land--and keep mule deer and elk on their winter range, too.--Matt Miller 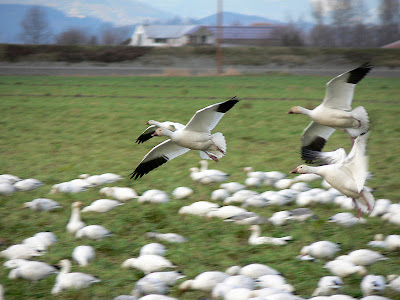 For the past several nights, I've heard overhead the sound of geese: Not the familiar Canada geese so common on our golf courses and farm fields. This is a higher-pitched call, yet still unmistakably emanating from geese. Early in the morning, I've seen them flying, their white forms and black wing tips visible even as they soar high overhead. Snow geese.

Most of these birds won't stop here: They're moving with purpose, heading straight for the Klamath Basin of Oregon and California.

They're on an almost incomprehensibly long flight, one that biologists are just beginning to fully understand.

Snow geese breed and spend the summer in various locations of the Arctic. The ones you'll see in Idaho in the spring and fall nest very far north, on the Wrangel Island on the Gulf of Alaska. Wildlife biologist John Takekawa, as reported in Wild Bird magazine, was part of a team of scientists that tracked this population.

As it migrates in the fall from Wrangel Island, the population moves along the coast of Alaska and British Columbia. About half the population goes on to Puget Sound.

The other half, though, makes a rather long detour, heading east to Alberta. These are the birds you'll see here. From there, the birds head south to Montana, then southeast through Idaho and Oregon to the Klamath Basin.

In the central part of the country, snow geese populations have exploded as they feed and thrive on rice farms. Many biologists believe they exist at such high densities that they destroy their own nesting habitat in the Arctic. Solving that problem will take creative management and solutions that challenge our various values about nature.

The other challenge faced by snow geese is loss of wetlands. On a migration that spans such a huge distance, winding from the Arctic to the British Columbia coast to the Canadian prairie to Idaho to California--these birds need places to rest along the way. Places like the Conservancy's Ball Creek Ranch in North Idaho and Idaho Department of Fish and Game's Ft. Boise Wildlife Management Area in South Idaho are both perfect places to see the importance of wetlands for snow geese.

Tonight, listen overhead, and wish these long-distance flyers good luck on their ultra-ultra-marathon.--Matt Miller
Posted by TNC-Idaho at 3:26 PM No comments: 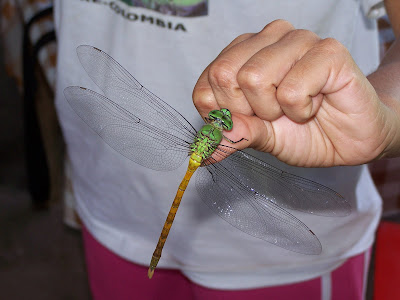 Not all dragonflies migrate; many nymphs in Idaho are deep underwater, awaiting spring. But when you see a flock of ducks, or a sharp-shinned hawk, flying overhead, look closely: There may be a flight of dragonflies flying nearby.--Matt Miller
Posted by TNC-Idaho at 11:13 AM No comments: