'Nature' fire at Silver Creek Preserve and beyond 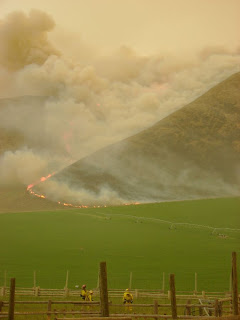 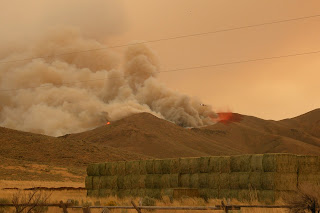 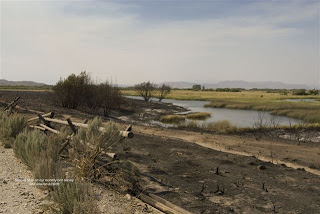 On Wednesday the 27th, about 3:30 in the afternoon, I received a call from one of the neighbors alerting me to a fire on the Preserve. I was in the Hailey office so I quickly called Frank, our trusty volunteer (who lives at Kilpatrick cabin, feet from the burn area). As I was asking him about the fire, the sheriff knocked on his door and told him he might want to leave. He called me back shortly after from the visitor center and gave me a brief update. It appears the fire started from the houses above the visitor center on an adjacent landowner’s property. There are rumors that it may have been a power connection and eye witnessed say it started with a single flame behind a shed. It quickly spread up the hillside and along the road, jumped over onto the Preserve, and then worked its way through the Picabo Hills to the south of Silver Creek and along the Purdy property to the east of the Preserve. As of today, it has burned over 14,000 acres and BLM firefighters hope to have it contained by this evening.

We are lucky that as of today, no major structures have been destroyed and no one has been hurt. We are also so lucky to have such a great crew of skilled firefighters on the job. The thing I feel most fortunate for, however, is the amazing group of neighbors and friends we have down here. I received countless calls from people offering my family a place to sleep and help if we needed it. Since the fire has moved past the immediate area and the damage to the Preserve is apparent, I have already been receiving calls inquiring about volunteer work from people wanting to help with the restoration.

In the next few weeks with the great crew of scientist in the Idaho chapter of The Nature Conservancy, I will be working on putting together a restoration plan for the burned areas. I look forward to seeing how the land repairs itself and welcome any thoughts, suggestions, or man hours!! 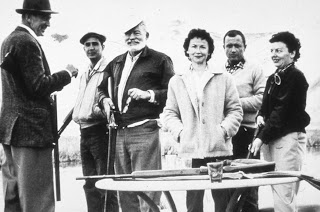 Next to his writing, Ernest Hemingway is perhaps best known for his connection to place: Key West, Cuba, Pamplona, the green hills of Africa. To that list, one could add Ketchum and southcentral Idaho. As soon as Ernest saw Silver Creek, he knew he had to return there with his sons. One of those sons, Jack, would later be the one to contact The Nature Conservancy to purchase the property--leading to Silver Creek Preserve and the preservation of much of the creek's valley through conservation easements.

The Ernest Hemingway Festival in Sun Valley celebrates his connection to this place. This year, the event will be held from September 25-28. You can register now.

There will also be a special dinner to help fund the maintenance and historical archive of the Hemingway House in Ketchum, owned by the Conservancy.
Posted by TNC-Idaho at 1:34 PM No comments: 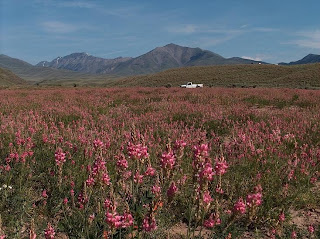 In 2001, The Nature Conservancy acquired 2600 private acres that became the Crooked Creek Preserve, located near Dubois. This acquisition was made possible through an individual donation to the Conservancy and included more than 67,000 acres of federal and state grazing allotments.

The ranch has a high sage grouse population and one of the goals of the project is to demonstrate effective habitat management for sage grouse and other wildlife.

The Conservancy and the North American Grouse Partnership (NAGP) jointly applied for cost-share grants to improve stream side and wetland habitat along Crooked Creek. These grants came from the Natural Resources Conservation Service, the Governor’s Office of Species Conservation, and the Idaho Department of Fish and Game’s Habitat Improvement Program. With the help of these grants, we expanded a small irrigation pond into a multi-purpose reservoir that provides both irrigation water and wetlands for wildlife. 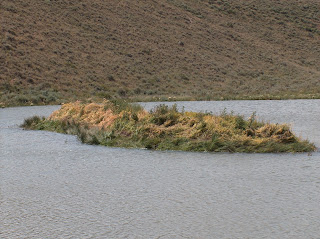 This summer the Conservancy’s Alan Sands contacted Intermountain Aquatics, a habitat restoration company, about improving riparian and wetland vegetation on Crooked Creek. In July, work began to plant a diverse mix of woody vegetation along 1000 feet of Crooked Creek. Several species of willow, Wood’s rose, chokecherry, black hawthorn, and golden currant were planted along the creek. Bull rush, willows, and other wetland plants were planted on the waterfowl nesting island in the reservoir.

The plants were in 1, 2.5, and 5 gallon containers depending on the species that came from two different greenhouses. The species were selected based on research into species located along the same creek further upstream from the planting site. The plants were planted in clumps or spaced out according to the natural growth of the species in order to make the restoration site look as natural as possible in the future.

This is just the first step and we hope to be able to expand this work in the future. --Dava McCann, East Idaho land steward and Alan Sands, ecologist 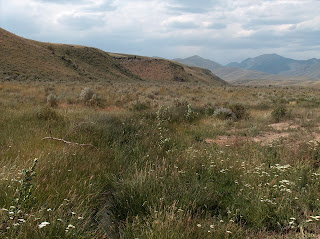 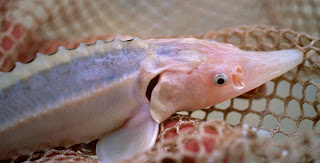 They're fish that swam with dinosaurs: The sturgeons, a 250-million-year-old fish family that has demonstrated a remarkable knack for survival. At least until now.

Various sturgeon species are found widely in rivers and lakes across Eurasia and North America. At one time, they were a common Idaho species, being found in the Snake, Salmon and other river systems.

The Kootenai River population of sturgeon has been isolated due to waterfalls to northern Idaho, Montana and British Columbia since the last Ice Age. Like most sturgeon species, they survived millions of years of changes, but they may not be able to survive their latest obstacle: humanity.

The sturgeon's life history includes a list of factors that now endanger it: Sturgeons need clear, cold water, and lots of it--they move up and down rivers throughout their lives. They need wetland areas to spawn in addition to rivers. Females require about 30 years to mature and breed. And, of course, caviar is a delicacy--commanding extraordinarily high prices.

For the white sturgeon, the upstream Libby Dam and resulting changes in the Kootenai River (including loss of wetlands and river meanders) has put the Kootenai population in peril. Less than 700 adults remain. And the population is aging; very few young fish are found in the river.

Fortunately, all is not bleak for the Kootenai's white sturgeon. Restoring wetlands and tributary streams in the Kootenai Valley mean cleaner water and better habitat. The Nature Conservancy has restored more than 400 acres of wetlands on its Ball Creek Ranch Preserve, and other organizations and agencies have similarly restored other wetlands throughout the valley.

Can these make a difference? It's hard to say, but last year kokanee salmon--another species that needs clear, cold water and tributary streams--returned to spawn in Ball Creek after being absent for more than four decades.

The Kootenai Tribe is also playing an important role, by rearing sturgeon in a hatchery and releasing juveniles in the river. With this imperiled population, clearly supplementing the wild fish will remain an important aspect of sturgeon conservation.

It will take time, but there's hope that these efforts will help restore these giant and ancient fish to our rivers--Matt Miller
Posted by TNC-Idaho at 12:19 PM No comments: 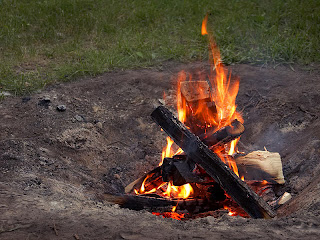 It's the height of the camping season in Idaho, and for many of us, one of the joys of being in Idaho's forests is the evening campfire. Who doesn't love roasted marshmallows as the evening chill sets in?

Chances are, if you camp, you're aware that campfires can cause wildfires. You know to make sure your fire is out, and to check for any fire closures in national forests.

But you may not know of another threat posed by your campfire: non-native insect pests and diseases that devastate our forests.

When you pack firewood from home, you may unkowingly be packing along some of these pests. An insect larva on a chip of wood could be all it takes to literally destroy the forest. The costs of controlling pests in eastern forests like the gypsy moth and the hemlock adelphid cost millions of dollars--and still the pests destroy more acres of forests each year.

Prevention is the key. And there is a simple way you can help:

1. Don't move firewood.
2. Talk to your local boy and girl scout troops--avid campfire builders--about the dangers posed by moving firewood.
3. Ask the seller if the firewood you are buying is from local trees.

The Dont' Move Firewood web site has many useful tips on how you can protect your local forests, and ensure the special places you camp will remain special for future generations. So, enjoy your campfire this summer, but leave the wood at home.
Posted by TNC-Idaho at 10:20 AM No comments: