What the Fires of 2013 Are Telling Us

By Will Whelan, Director of Government Relations
Editor's note: In recent years fires have spread across large swaths of Idaho's rangelands and forests. The following blog focuses on forest fires and the Conservancy's approach to proactive forest management. Stay tuned for a future blog that will discuss rangeland fires and issues related to them.

Idahoans have been transfixed this month by images of towering walls of flame rising above the treetops and entire communities fleeing their homes.  In just two weeks, four massive fires raced through tinder dry high desert and forests in south central Idaho, burning more than 400,000 acres – 625 square miles.

The events of this month are part of a larger pattern. The Forest Service and the Department of the Interior spend around $2 billion per year to suppress fire.  These costs consume at least 40 percent of the Forest Service’s budget.  Just this week the agency had to freeze many of its programs in order to pay for fighting this year’s huge fires.  These costs dwarf the funding that the Forest Service is able to invest in forest thinning and hazardous fuels reduction projects that actually reduce the risk of large, damaging fires in the future.  This is not a sustainable model for managing the public’s forests.


Fire in Idaho’s forests is nothing new, of course.  Our conifer forests evolved with wildfire, and fire plays a critical role in maintaining their health and resilience.  Not all natural fires are small, low intensity burns.  In fact, some of our forest types are naturally prone to larger fires that may kill entire stands of trees.  The huge firestorm of 1910, which burned three million acres in North Idaho, is a reminder that landscape-scale fire is not a new, or entirely human-driven, phenomenon in the mixed conifer forests.

But over the last century, Idaho’s forests have changed in ways that make them more vulnerable to large, very hot fires that are clearly outside of historic patterns. Three factors stand out: several decades of fire suppression have allowed fuels to build up; past logging often targeted the largest, more fire resistant trees for harvest; and a warming climate with hotter summers provides ideal conditions for megafires.  To make matters worse, these changes make large areas of Idaho’s forests more vulnerable to invasive species and insect infestations, which can promote damaging fires.

Recent events have led to increasingly urgent calls from citizens and their elected officials for actions that can reduce the impact of huge, destructive forest fires.  The Nature Conservancy in Idaho is addressing these concerns through science, collaboration, and advocacy.


Our scientists are studying how forests have changed from their historic conditions in order to understand which areas would most benefit from active restoration, such as thinning, careful logging, and prescribed fire.  Conservancy scientists Ryan Haugo and Nathan Welch recently completed an assessment of the six-million acre Clearwater Basin in North Idaho.  They found that about twenty percent of the forested land of the Nez Perce - Clearwater National Forest is in need of active restoration to make it more resilient to fire and closer to its natural condition.

Not all restoration involves active management.  Another ten percent of this  national forest would benefit most from “passive” restoration – essentially allowing the forest to grow back from past disturbance such as fires and logging operations.  Ryan and Nathan’s work is being used by the Clearwater Basin Collaborative to shape recommendations to the Forest Service on how to improve the ecological and economic health of the Clearwater Basin.  Click here for their study.

The Conservancy is also one of the most effective advocates for changes in the federal approach to fire. We champion proactive forest restoration to improve forest conditions while also reducing the need for costly emergency response.  The Conservancy’s Robyn Miller co-chairs the Clearwater Basin Collaborative’s Landscape Health Committee which designed an innovative ten-year restoration strategy for the 1.4 million acre Middle Fork Clearwater-Selway landscape.


At the national level, the Conservancy’s forest policy specialists dig deep into detailed federal budget documents and advocate for science-based recommendations on how to improve forest health and prevent megafires. One effort we strongly support is the Forest Service’s Collaborative Forest Landscape Restoration Program, which provides funding for collaboratively developed, large-scale forest restoration plans.  We like this program in part because it benefits both rural communities and forest health.  In the first three years of the program, projects resulted in: 383,000 acres of hazardous fuels reduction, 229,000 acres of fire-prone forest restoration, 94.1 million board feet of timber, 7,949 jobs created or maintained and 6,000 miles of roads treated to reduce sediment reaching streams.  We think this sort of pro-active, ecologically-driven program makes a lot of sense.  Click here to see the Conservancy’s forest restoration budget recommendations.

The Nature Conservancy owns and manages the Ball Creek Preserve, a wetland, preserve and modern working farm. About 1,200 acres of Kootenai Valley ground is currently being farmed by Ty and Lisa Iverson. Both are University of Idaho graduates - Ty’s degree was in Agriculture Economics in 2004 and Lisa’s in Education in 2008. Both are born and raised in north Idaho, Ty right here in Boundary County and Lisa in Bonner County near Priest River.


Lisa is a popular teacher at the Boundary County Junior High, teaching Language Arts. Ty’s Mom, Tracy Iverson, taught at the High School for over 30 years and just retired last year. Ty farms over 2,800 acres total in the valley, with his dad Tom helping him, along with two other seasonal employees. This time of year it is difficult to catch up with Ty unless you meet him on a tractor in the field. Ty is a third generation farmer in the Kootenai Valley, and is a hard worker, smart, innovative and versatile.

Farming is very different from just a short 20 years ago, with the aid of advanced technology and modern farm equipment. Ty employs both to be successful, though he still must work with Mother Nature and change with the climatic conditions. The Ball Creek Preserve is sub-irrigated so where most Idaho farms always need more water, we are generally trying to ditch and move water away from the fields. Last year Ty lost between 300-400 acres of crops due to the wet spring and the seepage from underground. But because of this moisture and our good soils, the Kootenai Valley is some of the richest farmland in the Inland Northwest. This year Ty has several crops growing - he keeps well diversified in order to hedge against all the risks that are associated with farming (weather, markets and costs of fuel, pesticides and fertilizer). 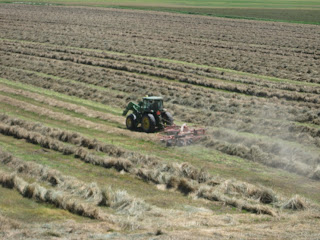 Most of the farm produces Soft White Winter Wheat and Barley - both crops will end up in either China or Japan.  Ty also is growing Timothy hay and Alfalfa hay. The Timothy hay will end up in Japan and the Alfalfa hay will be delivered to central Washington where it will used as feed for dairy cows. The last crop being grown is Timothy seed and this again will be sold to the Japanese. Ty rotates crops frequently and uses canola and garbanzo beans as part of this crop rotation.  Canola is grown for food grade oil and is shipped either to Canada or Moses Lake, Washington for processing. Garbanzo beans are a relatively new crop for the Ball Creek farm and are delivered to a food processor in Moscow, Idaho where they make hummus. As you can see, Idaho farming is an international business.

Ty is a modern farmer and uses mostly all “no till” planting - all fall planting is “no till,” where spring planting uses “reduced tilling” in order to help keep the soil warm for seed germination. “Reduced tilling” uses some minor cultivation but rarely do you seed a totally plowed field anymore. GPS technology has been installed in all of Ty’s tractors, which track precisely his planting, spraying, and fertilizing. This saves both time and money, and is good for the environment. 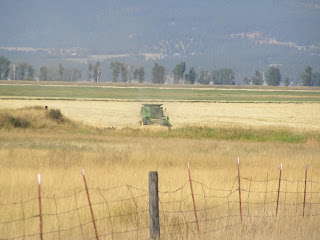 If you had seen the Ball Creek farm 13 years ago before TNC purchased it, you would have seen a much different operation. Today with the Iversons' good management practices and hard work, the farming operation is economically viable and environmentally sound. We are very fortunate and very proud of this modern farming operation.

Posted by Robin Zimmermann at 1:15 PM No comments: