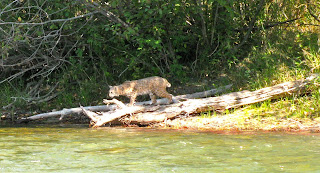 Nature Conservancy volunteer and photographer Ken Miracle sent these photos of a great wildlife sighting he had on the Boise River on Friday: a bobcat.

Writes Ken: "I only had about an hour to fish today. Just as I finished loosing a fish I had hooked, ever so lightly, on a bullet head hopper there was a commotion on the other side of the river. This hunter had leapt in the river chasing a couple of ducks. Unfortunately the ducks got away and all he got was wet.

"He then proceeded to walk out on this log and sharpen his claws and dry himself off with his tongue and the sun. I spent my last 20 minutes of fishing time watching this bobcat. I only had our little pocket camera with me and it does not have a view finder so it was hard to get a good focus with the sun on the back screen Even though the catching was not the best I had a great hour on the Boise shared with one of my neighbors."

Bobcats are probably more common around Idaho than we think. They're secretive animals, spending most daylight hours resting in caves or hollow logs.

They're found widely in the state, from sagebrush to forests--and, obviously, even near our largest cities. 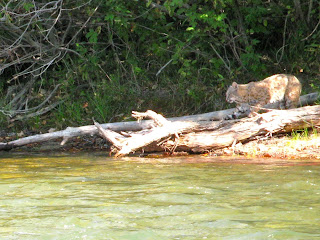 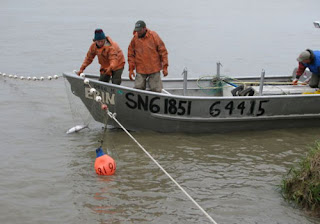 Naturalists have long been fascinated by massive herds, flocks and swarms--the Serengeti wildebeest, the long-gone bison on the plains, incomprehensible bird flocks overhead.

However, much of the information we know about such phenomena appear to not bear much scientific scrutiny. A lot of recent thinking fits within in a "balance of nature," when in reality, perhaps, we should be speaking of the "chaos of nature."

I've recently read several pieces that capture the real complexity of super-abudant wildlife, what could be called "biological storms."

This an excellent essay, one that raises many questions about our notions of the natural world, about change and inter-connectedness.

Bodio raises the possibility that burning by pre-European tribes may have helped create the super-abundance of the passenger pigeon--undoubtedly one of the greatest biological storms the Earth has ever seen, one that makes hurricanes and tsunamis seem mild by comparison.

Bodio writes of one flock that occupied the entire southern two-thirds of Wisconsin, a flock that consumed an estimated 210 million liters of food per day.

The composition of trees in forests and the fate of other birds like ivory-billed woodpeckers were both likely shaped by passenger pigeon flocks. Indeed, it's no exaggeration that these pigeons significantly shaped the ecological history of our continent.

This Living Bird piece led me to entomologist's Jeffrey Lockwood's celebration of cicadas from The New York Times.

Here is a species that still thrives alongside us in the eastern United States, in inconceivable numbers: Their waste alone would fill 300 Olympic-sized swimming pools a day. This cicada species remains dormant for 17 years, to noisily reemerge in a frenzy of feeding and breeding. When they die, they leave behind some 500 trillion eggs--and begin the cycle anew.

(By the way, Lockwood has also written one of my favorite books, Locust, which concerns another once super-abundant animal now gone from the plains).

Finally, salmon may not exist in such staggering numbers as passenger pigeons did and cicadas do.

But wild salmon from fisheries like Bristol Bay still provide an incredible amount of healthful food. Despite a thriving commercial fishery, we can still eat Bristol Bay's salmon without guilt--and indeed, we can eat them knowing we are helping to ensure their continued survival.

My counterpart in Alaska, Dustin Solberg, recently took a month off work to spend as a commercial fisherman in Bristol Bay. His essays on Cool Green Science offer a look into that life, and into the incredible abundance still swimming in Alaska--feeding not only humans but bears, eagles, belugas and an entire ecosystem.

That this incredible resource is under threat by a gigantic mine should concern us all. Let's not repeat the mistakes of the past. Read Solberg's posts and learn more about what you can do to help.--Matt Miller 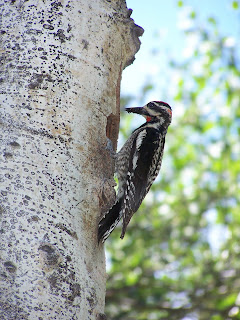 Aspen groves are well-known for their value to wildlife. One of the many birds that use them extensively is the red-naped sapsucker.
My wife, Jennifer Miller, photographed these sapsuckers on a trip earlier in the summer to City of Rocks National Reserve. Throughout the aspens, the birds were feeding their young nesting in holes in aspen trees.
As their name suggests, sapsuckers do feed on sap--predominantly from willow trees. However, they don't suck sap, they peck the tree and then sip it. The tip of the sapsucker's tongue has small, hair-like projectiles that help it better lap the sap.
As with many birds, young sapsuckers need protein in the form of insects and other invertebrates. The adult sapsuckers we watched at City of Rocks brought plenty of insects to the constantly begging youngsters.
It was a great experience to watch these birds, from just a few feet away, squeeze into the hole and then reappear.
Hopefully, it's an experience future generations can enjoy. Aspen groves have been in steep decline, which appears to be related to climate change. Aspens provide habitat for not only sapsuckers, but also mule deer, elk and a large variety of birds.
Aspen trees are actually a community of clones--the grove is actually one organism growing from roots. As such, many consider the aspen grove to be the largest and oldest organism on earth. The "Pando" aspen colony in Utah is estimated to be 80,000 years old and weighs 6600 tons--making it the largest and oldest thing on earth.
Hopefully climate change actions can help save the aspen groves--and the species like red-naped sapsuckers that depend on them for their survival. 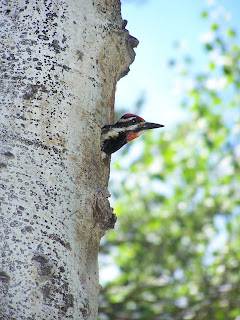