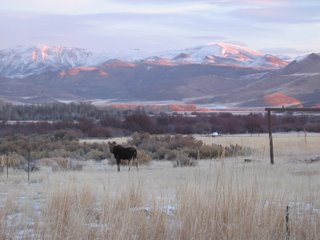 There are several events planned this winter at the Silver Creek Preserve. The following is a list of events organized by the Environmental Resource Center of the Wood River Valley. Silver Creek staff will be helping to lead the tours around the Preserve and there are bound to be great things to see. The winters bustles with activity-- waterfowl, swans, eagles, elk, deer, moose often make appearances-- so put your warm clothes on and come on down.

Birding on Snowshoes
Saturday January 27, Saturday February 24, and Saturday March 31st 10 am- 2 pm
An adventure viewing birds in the Silver Creek area. Carpools meet at the Hailey Park and Ride at the corner of River Street and Bullion st.
Free to ERC members
Donation to ERC requested ($15) for non- members and ($25) for families of 3 or more.


Coming of Spring Walks
Saturdays: 3/3, 3/10, 3/17, 3/24, 10 am- 2 pm
Discover the coming of spring with the ERC on nature walks to Silver Creek Preserve. Watch spring unfold by noticing changes in the abundant flora and fauna. Groups will meet in Hailey at the corner of Bullion st. and River st. at the Park-and-Ride lot.
Free to ERC members
Donation to ERC requested ($15) for non- members and ($25) for families of 3 or more.
Posted by TNC-Idaho at 12:38 PM No comments:

A Gift To Idaho

"Christmas came to Idaho early this year," Governor Jim Risch said yesterday at a press conference in his office. Risch was there to announce Idaho's newest state park, Ritter Island--a gift from The Nature Conservancy to the state.

Ritter Island has been owned and managed by the Conservancy since 1986. Since Idaho Department of Parks and Recreation has a vision

The Conservancy has owned Ritter Island since 1986, and has managed it as Thousand Springs Preserve. The island includes a historic rock house and dairy farm built by businesswoman Minnie Miller in 1920. The facilities remain in excellent condition. The Minnie Miller Falls on the property are the largest intact springs along the Middle Snake River.

The Conservancy’s goal in the Thousand Springs area was to protect the springs and unique wildlife they support. The scenic site has also been a popular recreation area and many visitors have expressed an interest in touring the historic buildings. By donating the property to Idaho to manage as a state park, the Conservancy will ensure the continued protection of the springs and wildlife habitat, while at the same time provide the public with what it wants: more access and interpretive facilities for the history and nature of the island.

“Our work in the Middle Snake River with members and partners is creating a legacy that all Idahoans will be able to enjoy,” says Laura Hubbard, the Conservancy’s Idaho state director. “I thank all of our supporters over the past twenty years who have made this enduring conservation legacy possible. Because of their support and vision, future generations will be able enjoy the natural beauty, unique wildlife and inspiring human history of Ritter Island.”

Watch KTVB-NBC Channel 7's reporting of the press conference.
Posted by TNC-Idaho at 8:39 AM 1 comment:

With the close of fishing season on November 30 concluded The Nature Conservancy’s 30th anniversary year at Silver Creek Preserve. During the fishing season, which opened May 27, the preserve attracted 7301 visitors representing every U.S. state and 13 countries.

Almost half (49 percent) of all visits were from out-of-state guests Visitors came to the preserve from Austria, England, Japan, France, Switzerland, Canada, Mexico, Australia, Argentina, Germany, Turkey, New Zealand and Peru. The preserve is considered a worldwide fly-fishing destination due to its tremendous insect hatches, an incredible trout population and very visible—but hard to catch—trophy fish.

In fact, 89 percent of the visitors to the preserve came to fish. About 18 percent used one of the five guide services that operate on Silver Creek. The rest of the visitors enjoyed birding, hiking and canoeing on the 880-acre property.

While some of the hatches changed this season due to early high water, anglers found excellent an excellent trico hatch and a strong fish population. The largest trout ever recorded caught on the creek, a 33-inch brown, was landed this summer by a former Silver Creek intern.

The preserve was created 30 years when The Nature Conservancy purchased the 479-acre property known as Sun Valley Ranch. The ranch had been up for sale and Jack Hemingway—son of Ernest Hemingway and a commissioner for the Idaho Department of Fish and Game—believed the property should be preserved for future generations. Hemingway sought the Conservancy to purchase the property as a nature preserve.

An important part of the conservation success along Silver Creek has been the donation of conservation easements by other landowners in the valley. To date, 22 landowners have donated nearly 10,000 acres of easements, protecting nearly the entire main stem of Silver Creek from development.

“The number of visitors that enjoy Silver Creek each year is a great testament to the conservationists who worked so hard to make this preserve possible,” says Dayna Smith, Silver Creek preserve manager. “They have created a tremendous conservation legacy in this valley. Future generations from all over the globe will be able to continue to enjoy world-class fishing, abundant wildlife and a rural setting due to their hard work and vision.”

The Conservancy hosted activities throughout the season to celebrate the preserve’s anniversary, including a gala event for the preserve’s founders at nearby Loving Creek Ranch, an opening weekend barbecue, nature walks and educational seminars. The organization also published a commemorative booklet, available free at the preserve and the Conservancy’s state headquarters in Hailey.

While the fishing season and anniversary celebrations are over for the year, the preserve remains open to public use.

“It is truly a beautiful time of year to be here,” says Smith. “Waterfowl have congregated in the wetlands, bald eagles fly overhead and the winter light is stunning.”

The Conservancy has ambitious plans for the preserve and Silver Creek watershed in the coming years. Uplands habitat restoration, a study looking at sediment and temperature issues in Kilpatrick Pond, stream bank enhancements, birding and nature walks, and a symposium to discuss Silver Creek and Big Wood conservation issues are a few of the things planned for 2007.

“By working together, we can ensure that the preserve continues to be a special place for people and nature,” says Smith. “The Nature Conservancy thanks the many people who contributed to the preserve over the past thirty years. We look forward to continuing to work with the community to protect this place for many, many decades to come.”
Posted by TNC-Idaho at 12:17 PM 1 comment:

Give the Gift of Nature This Holiday

Help protect the last great places on Earth with these holiday gifts that benefit The Nature Conservancy's work:

1. Give a gift membership.

2. Help protect the world's most extraordinary forests through The Nature Conservancy's Adopt an Acre program.

3. A holiday gift to Rescue the Reef, a program that helps conserve coral reefs, one of the most endangered--and important--wildlife habitats on Earth.

4. Shop for apparel and other items at The Nature Conservancy's store.
Posted by TNC-Idaho at 3:06 PM No comments:

The End of a Great Fishing Season 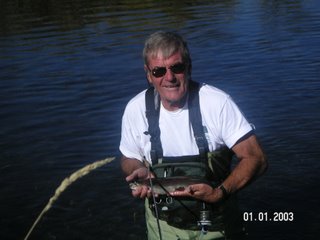 November 30, 2006 marked the end of a great fishing season at the Silver Creek Preserve. We had over 7,000 visitors this year from every US state and fourteen countries! Dramatic spring flows altered the creek in many ways--creating new habitat and new challenges for fishermen. And although hatches were a little different in timing and frequency this year and stream conditions in some places very different, fishing reports were great all summer and fall. September and October saw much heavier angler numbers than last year probably due to the beautiful weather and active fish.
A big thank you to all the people who volunteered this summer. We had several visitor center hosts and hostesses as well as people who came out just for the day. We could not have had such a successful summer without all of you.
We look forward to next season, have a great winter!!
--Dayna and the Silver Creek Staff
Posted by TNC-Idaho at 12:16 PM No comments: