The Bears of Hall Mountain

Several years ago, The Nature Conservancy purchased 320 acres of forestland at the base of Hall Mountain located in northern Boundary County, Idaho, just five miles from the Canada/USA border.


This property, which was named the “Hall Creek Forest,” was destined to be subdivided — the long-term owners, who were exceptional stewards of this land for 40 years, had recently passed away and it had been listed with local realtors. It is a unique piece of ground with large trees, wetlands, spectacular mountain and valley views, located in the sunniest part of the county. This property shoulders up to Hall Mountain to the east which is mostly U.S. Forest Service forest lands. The Conservancy recognized the conservation values and was able to purchase it with the intent of placing a conservation easement on the property and eventually re-selling it to a like-minded buyer.

This low elevation property has a large, secluded, hardwood wetland, which provides quality habitat to a wide array of wildlife, especially bears: both black bears and the occasional grizzly bear. During the dry summer and fall months, there is readily available water and forbs — and bears are frequent visitors. Ample huckleberry patches can be found on Hall Mountain to the east, providing the main diet for the bears during summer and fall, and sustaining them during winter hibernation.

Remote cameras were placed in the wetlands and over the past two years we have taken many photos of bears – all black bears so far. There are many pictures of single bears, mostly browsing, climbing, and scratching on the cedar trees. Surprisingly, many family units have shown up on film. This summer we had pictures of a mother and three cubs. The mother was teaching her offspring to climb a tree to seek safety and would continually push them up the tree from where she was standing. Most family pictures are of twins or single cubs, all practicing their climbing skills on these large cedar and cottonwood trees. In this part of Idaho, cubs can be subject to predation by other black bears, grizzly bears, and mountain lion, all which prowl on this property. 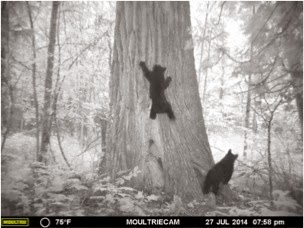 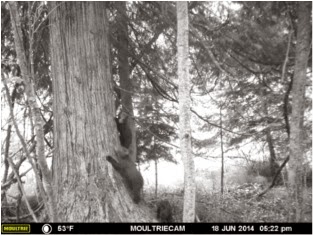 The Conservancy has been working with many private landowners in this part of Boundary County to acquire conservation easements in an attempt to keep the larger tracts intact and free of development.  These low-elevation valley lands, which offer water, food, security and thermal cover, provide important seasonal habitat for all types of wildlife. With the permanent protection of the Hall Creek Forest, the bears of Hall Mountain will always have a special place to come down to and visit.
Posted by Lisa Eller at 12:16 PM 1 comment:

by Sarah Long, Silver Creek Preserve summer intern
Editor's note: Sarah graduated from the University of the South at Sewanee and  was the recipient of the 2011 Raoul Conservation Scholarship.  She completed her first position with the Nature Conservancy as the Seasonal Educator at the Cape May Migratory Bird Refuge along the Atlantic Flyway in NJ. Her interest in birds and TNC brought her to The Silver Creek Preserve for an internship during the summer of 2014.


Silver Creek—a beautiful name for an equally beautiful place. I've grown up near water; I have seen my share of steam-rising, sunlight-glinting magical moments of aquatic glory. I had, however, never clapped eyes on a place such as Idaho.

Water in the West is different. Life-giver of the desert, water is religion. Perhaps this land was never meant to hold so many men, so many thirsty plants and hungry cattle, and yet hold them it has.

In July, I watched my first wildfire belch smoke into the sky. Thirty thousand acres burned in the span of an evening; smog filled the valley for over a week, blurring the sky with haze. The land seemed hostile, the sky denying us badly needed rain.


In August, rains came, dampening the hay on the ground. There is tranquility amid the clash of sky, the earth, and its inhabitants. Fishermen travel from around the world to stand hip deep in cold water, casting back and forth, back and forth.

In the failing light of evening or the gentle rising of the dawn, the still water is a mirror to the sky, blurred only by the insect hatch hovering close to the surface. Wrens chatter in the cattails and swallows perform their acrobatics, snatching bugs from the air before returning to willow branches. In the fields, harriers glide low, searching for mice, while a kestrel hovers, waiting for movement in the grass to give away its prey.

It inspires a kind of faith to know that there is something greater than humanity on this land and to know that when the water is gone and the people with it, the hills will stand over Picabo as tall sentinels over the changing landscape at their feet.

As I drive east, I wonder if I will be disappointed by the stature of my Blue Ridge Mountains, underwhelmed by the Shenandoah Valley, disenchanted with the Piedmont. The West has a feverish draw, causing me to wonder how long I will be content with the closeness of the air and the closeness of the people, having seen a night so full of stars that there was hardly any darkness.
Posted by Unknown at 9:00 AM 1 comment: