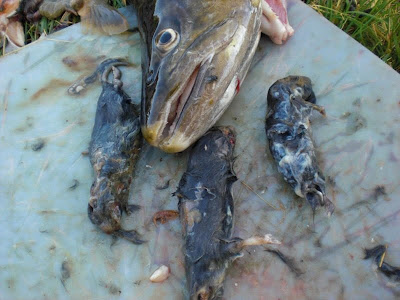 Thirty-five years ago this summer, Jaws caused many people to pause before they stepped into the water.

Unless you happen to be a vole.

During ongoing fish surveys at Silver Creek, the Idaho Department of Fish and Game killed a few fish to sample growth and health of the population.

A look at fish stomach contents might surprise those who spend their days casting dainty mayfly imitations to rising trout.

The above rodents were pulled from trout stomachs.

Montane voles are an abundant animal throughout the Intermountain West, small rodents that make well-defined paths as they forage. They're prone to periodic population explosions.

This is such a year at Silver Creek. And the trout have obviously keyed in on them, much as they would a mayfly hatch.

I've always heard that trout will take small rodents along the creek, and I know some large trout are caught on deer hair mouse flies. Still, I always considered these to be a "fishing tale," something that may happen on rare occasions, but hardly a regular occurrence.

Well, here's the proof. For voles, it really isn't safe to go back in the water. --Matt Miller

Photo by Ralph Stewart
Posted by TNC-Idaho at 1:06 PM

is that a squid or some kind of shark?