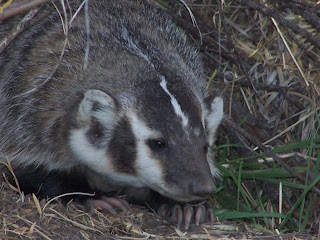 Driving along a dirt road on the Camas Prairie recently, I noticed a squat, muscular creature trotting along a field edge: a badger. Getting out of the car, I quietly trailed it, to snap some photos as it moved towards some brush. 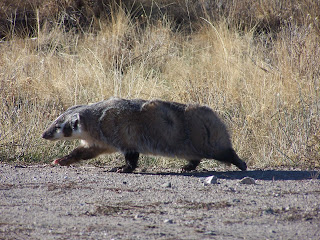 When it noticed me, it quickly found a mound, and backed into some brush: a common badger defense. This way, it could meet any danger head on. Badgers have a reputation for being aggressive and downright ornery, and as I crept closer I thought it might charge. 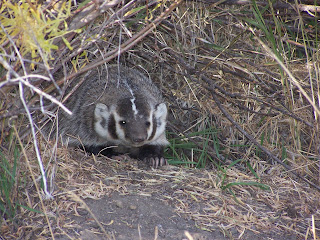 But this badger was just indifferent, judging me as not much of a threat.
Badgers are a member of the Mustelidae Family, which also includes weasels, minks, martens, fishers, wolverines, otters and other predatory creatures. While many of the mustelids are known for being sleek and stream-lined, the badger is noticeably squat, round and muscular. It has to be, as it hunts its favored prey--ground squirrels--by digging after them. Some biologists report badgers that will dig into a ground squirrel hole and wait in the excavation for its prey to return. Badgers also sleep in burrows they dig, usually a different one each night. 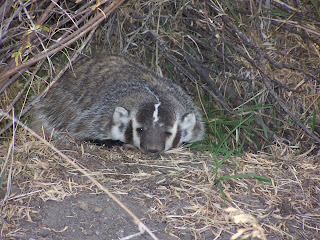 Due to this tendency to dig lots of big holes, the badger has never been a favorite animal of those who raise livestock. But the badger has thrived in the West despite this. Idaho can lay claim to the largest population of badgers in the world, in the Snake River Birds of Prey National Conservation Area. The Owyhee Backcountry Byway, the Camas Prairie and other open areas are also good places to see one.
Although badgers are common in Idaho and are unprotected by game laws, they do face familiar threats. My colleague Sus Danner tells me that badgers fare poorly when busy highways intersect their range. In California, their populations are in decline due to this fact. And on my drive home, I couldn't help but notice several dead ones along I-84 between Boise and Mountain Home. Hopefully, research can be conducted to monitor our state's badger populations. Even more important, with Idaho's rapid growth, conservationists need to think about wildlife-friendly roads--not only for badgers, but also for barn owls, mule deer, elk and a whole host of other species.
For now, though, the badger remains a common if seldom seen creature in many parts of the state. Keep an eye out the next time you're on Idaho's backroads; you might just be rewarded with your own badger encounter. -- Matt Miller 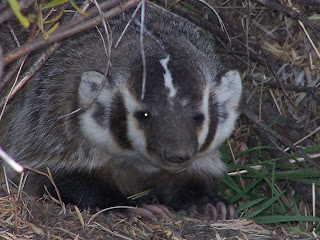 My son is doing a badger project for a GATE Night at the Museum exhibit and while we were searching fof information about Badgers here in Idaho(we live near Idaho Falls)we came across your blog page and were very excited. We would like to use your blog as a source if that is okay with you?
My son has really taken to Badgers, especially since he began reading the Redwall Series of books. He was very excited to find your site talking about Idaho having the most badgers.

Jeanne,
Your son is most welcome to use any information on this blog, including the badger photos. Badgers are one of my favorite animals, too. If you ever find yourself near Boise or Hailey, let me know and I'd be happy to take you on a badger-spotting trip.

Today is July 10, 2008. We noticed a badger in our pipe under the driveway to our home. I told the kids not to disturb it since it is a good animal. It likes to eat mice (though I've not seen any in years) and snakes (I've not seen these either). We live in Twin Falls, Idaho.

August 1, 2008. I saw a badger today in the Black Eagle business park at Overland and Maple Grove in Boise. It sauntered across the road, past an office building and into the adjoining subdivision.

I live near Mountain Home and I see badgers most every day, in fact I have shot and removed over 20 of them to date on my property. They are a problem animal, they eat chickens ans cats, and leave huge holes in my pasture. Good thing they are not protected.

I live in East Kuna on one arce. We have had badgers eat our ducks. last week he eat our mother duck and her eggs she had been sitting on since Easter weekend. How do I get rid of IT!!'
Bon

There was a badger in my back yard in Boise last night 07/21/09 at about 10:30 pm. I live on 17th street near Hazel in the North end. It must have crawled under the back gate from the alley. I have chickens but I think it may have just been passing through.

I was working in my home office in North Middleton today (backing BLM)when I heard 6 of my 7 chickens screeching. It was about 1pm and I looked out and saw they were all staring and screaming at a large badger that was shading himself under one of our trees. The badger appeared to be relaxing but kept a steady eye on my chickens. Our baby chicken Peepers, who is not afraid of dogs or cats, decided to check the badger out. When I saw Peepers running towards the badger I got a bit nervous and walked towards the badger with the intent of shooing my chick away from it. The badger did not seem concerned that I walked over to it and did get up and slowly walk away when I got about 6 feet away from him. Of course, I am checking on my every few minutes now and my husband advised me to do some homework on badgers. I think he was trying to tell me not to walk up to one again!

I live in Coeur d' Alene and recently harvested a deer. The deer had gone down a little overgrown gully and died in the middle of the trail. It was after dark when we found it and when we did there was a badger making his way up the trail for a free meal. He didn't like us being there he charged hissed and bared his teeth. All in all it was a very cool but suspensfull experience. Never walk up on a badger and his meal.

Last night around 3am May 2, 2010 my motion light came on so I looked out my front window. To my surprise a badger was looking up. Its the first badger I have seen around here, but by the sounds of it, their are alot of them. I watched him try to open the gate to my back yard with his nose. It was locked and this morning I saw where he tried to dig underneath it. We have no chickens etc but I did lock my Jack Russell in the house after that.

I have one living in my front pasture 5/07/10. Looks mean, acts mean, I'm afraid my dog or cat are going to suffer the consequences of his actions. Love the fact that you posted that they eat ground squirrels, He's not doing a good enough job in my opinion, I'm overrun with those as well. But I guess it's only fitting I live South East of Kuna, about 1/4 mile from the Birds of Prey.

I had a badger in the back of my garden yesterday morning, 8/1/10. It has made a huge hole next to the power pole, right where my cat likes to hang out. Must be after mice! I don't mind the raccoons that travel across the front yard in the early, early mornings, but this guy kinda' scares me. Sue/Boise

Yesterday about 4 pm my golden retriever and I spotted a badger on the mountain behind our home. At first I thought it was a raccoon but it did not have a tail. My dog chased it and it swiped at him and I managed to call him back. We are surrounded by burnt forest which is what possibly brought him to the only green belt out Greenhorn Gulch. Hope he and other critters survive after the Beaver Creek fire.

I just moved to Nampa from WA state. The house I am renting has a field that is riddled with burrows that I suspect belong to a badger. How can I know for sure, and what can I do about it? I was hoping to rehab the outbuildings to have some sheep and chickens, but I can't do that with badgers around.