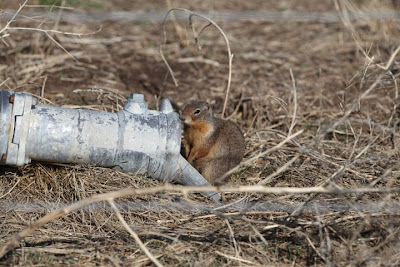 Take a walk during the spring or early summer in many parts of southern Idaho and you'll see ground squirrels scurrying around.

And then, around this time of year, they disappear.

Where do ground squirrels go? 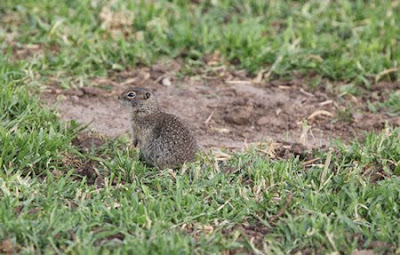 Much is made of Punxsutawney Phil's emergence each year; the groundhog's emergence from a den is viewed as a sign of spring. But, in warm areas (like southern Idaho), ground-dwelling rodents return to their dormancy--not when it gets too cold, but when it gets too hot.
Hibernation and torpor are ways of conserving energy. Finding food and staying warm in the winter requires a lot of calories: more than most ground-dwelling squirrels can muster.
Staying cool also takes a lot of energy.
For several species of Idaho ground squirrels, that means they are above ground for very short periods of time.
For instance, take the Columbia ground squirrels so common around Silver Creek. They emerge in mid- to late-April. And then, in early July, they return to their burrows for a very long dormancy. Sometimes they reemerge for a short period in the autumn. Other times they don't re-emerge until April.
It boggles our human notions of time to imagine a species that is dormant for 8 or more months each year of its life.
Yellow-bellied marmots in the cool Idaho Rockies will remain active through the fall. In southern Idaho, many go into dormancy beginning in July.
Idaho is home to 19 species of the squirrel family--9 ground squirrels, 5 chipmunks, 2 marmots, 2 native tree squirrels and 1 non-native squirrel. One of them, the aptly named Idaho ground squirrel, is only found in this state. To most, a "ground squirrel is a ground squirrel," but they can be fascinating animals to observe.
In fact, this spring I hosted two mammal watchers who traveled to Idaho (one from France) specifically to see different species of ground squirrels. Mammal watching may not be as popular as birding, but its enthusiasts are just as as passionate.
Take some time to check out the ground squirrels. But go now, because many will soon be back underground, hibernating for another eight months. 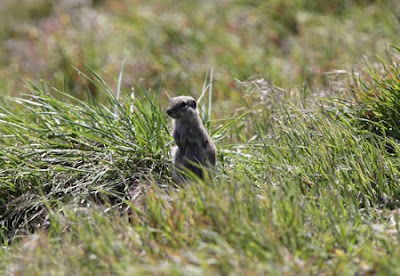 Hi Matt. I agree the activity cycle of the ground squirrels out west is extraordinary. I had no idea they went back underground so early until I started talking to you. So they are fascinating things to have adapted to cope with such extremes of temperature. Do you know how long they live? Some of the smaller mammals that hibernate (like the Australian Mountain Pygmy Possum) are extraordinarily longlived for their size. Ita almost as if they get the same amount of waking time allotted to their lives as other critters. They just make it last longer. My brother was the same each Easter. He always had chocolate left long after I'd guzzled mine.