As Fires Burn Up the Forest Service Budget, the Conservancy Calls for a Better Way to Fund Fire Suppression

by Will Whelan, director of government relations

As I write this post, Soda Fire in southwest Idaho is by far the largest wildfire in the nation, and Idahoans from Owyhee County to the Clearwater Valley are being advised to evacuate homes in the path of advancing flames.  More than 60 large fires are active across the country, with nearly 20,000 firefighters on the lines.  The entire national system for fire suppression is stretched. The toll on people, communities, and sagebrush habitats that we’ve worked so hard to protect has been heartbreaking.


The headlines grab our attention, but the impact of longer and more severe fire seasons extends far beyond the fire lines.   A Forest Service report issued this month delivered a stark message: the skyrocketing cost of firefighting threatens the agency’s ability to manage for recreation, wildlife, restoration, jobs, and all of the other benefits that Americans derive from our public lands.

Twenty years ago, the Forest Service spent 16% of its budget on fire suppression.  Today, that figure has increased to more than half.  In ten years, two-thirds of the agency’s funds will go to fighting fires.  Because the agency’s overall budget allocation has been basically flat for years, essential land conservation and stewardship programs have absorbed the blow as more and more money goes to suppression.  I was stunned to discover that the Forest Service’s non-fire staff has fallen by 39% since 1998. 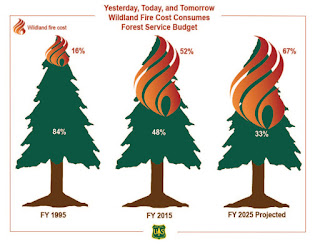 This is not a sustainable model for our public lands.  Tens of millions of acres of national forest lands need restoration through actions such as stream rehabilitation, forest thinning, and prescribed fire. Three-quarters of forest trails don’t meet agency standards.  The Forest Service’s road and facility maintenance backlog runs into the billions of dollars.  None of these needs can be met if current trends are allowed to continue.

This week, I joined Senator Crapo (R-ID), Senator Risch (R-ID), and Senator Wyden (D-OR) at a press conference to promote the Wildfire Disaster Funding Act.  This bi-partisan bill would change how the federal government budgets for wildfire disasters by making it similar to the way other disasters are funded.  The public land agencies would continue to pay for fighting most fires.  But, the costs associated with the disaster fires would be funded with disaster funds.  The bill would have no impact on the overall federal budget or the deficit, according to the Congressional Budget Office. But it would finally give some breathing room for programs that support restoration, conservation, recreation, and the other public land values we prize.

To keep track of this and other fires around Idaho visit: http://idahofireinfo.blogspot.com/

Posted by Unknown at 1:34 PM No comments:

On June 5, we arrived for our first day of work as the Flat Ranch’s summer interns. Earlier that week, through the generous support of the A. Paul Knight Internship Program in Conservation through Washington and Lee University, we had traveled over 2,000 miles from Virginia to Idaho. We go to school in the valley of the Blue Ridge Mountains of the Appalachians, another beautiful part of the country but a noticeable contrast to the Rocky Mountains. Armed with a basic understanding of The Nature Conservancy’s mission and an adventurous spirit for exploring the West, we both began our Flat Ranch experiences not exactly sure what kinds of scientific or manual responsibilities to expect.

Our initial morning as Flat Ranch employees set the tone for the summer; our foremost order of business was to purchase rubber boots for traversing the marshy areas of the preserve and work gloves for just about everything else. When we returned to the preserve, we sat down with Flat Ranch manager Matthew Ward to review our work plan for the summer. The list of tasks seemed foreign and a little overwhelming to two inexperienced ranch hands from the East Coast.

“Ensure all fences are kept repaired.” For all the things that our college educations prepared us for, building and fixing barbed wire or electric fences had somehow never been covered. “Study preserve wildflowers.”  Looking out on a sea of white, yellow, blue, and purple blossoms, we really doubted we’d ever internalize most of the names of the wildflowers found on our 1,600 acre property. “Study common invasive plant species found in Idaho.” If we could hardly keep track of the names of the wildflowers on the preserve, how were we supposed to remember which flowering plants weren’t actually supposed to be here?

After receiving first-time lessons on how to drive a pick-up truck through the grass, learning ATV 101, and having copies of Plants of the Rocky Mountains, Idaho’s Noxious Weeds, and Flat Ranch’s numbered cow pasture map tossed our way, we were immediately trusted as full-fledged Flat Ranch employees. Despite our initial lack of confidence in our aptitude for ranch work and wildlife and plant assessments, Matthew quite willingly sent us off into the preserve to learn. We quickly came to appreciate that often the best way to climb a steep learning curve is to be thrown into the deep end. All of the skills we’ve acquired this summer were completely new to us, from measuring stream flow and cleaning out fish ladders, to monitoring grazing progress and even simply managing to open the ever-challenging barbed wire gates between pastures. With two months of work under our belts, we can say that our summer at Flat Ranch has been a testament to the power of learning by doing.

Not only have we noticed a distinct change in our ability to make significant headway on projects at Flat Ranch, but we also realized that our time at Flat Ranch has shifted and shaped our outlook on our environment outside of work. For example, all of our time spent mending or raising fences has caused us to occasionally admire the handiwork that went into a particular ranch’s fenceline as we drive down the highway. Similarly, the time we have spent mapping problematic weeds on the preserve has tuned us to exercise sharp eyes for Canada thistle, houndstongue, oxeye daisy, common toadflax, and other invaders. We knew we’d finally mastered these noxious weeds when we caught ourselves pointing these species out to one another in various locations where we spent our days off.

Furthermore, when we go on hikes in Yellowstone, we carry a wildflower identification book, not because we don’t know the names of any of the wildflowers, but because we’ve familiarized ourselves with so many at Flat Ranch and have developed a real curiosity for identifying species still unknown to us. As the days have turned into weeks and the weeks have turned into months, we’ve become so well-assimilated to our lifestyle as interns on the preserve that we’ve gained a keen interest in and fondness for our environs and subjects of work.

Additionally, as we’ve gotten to see more and more of Eastern Idaho and the surrounding areas in Wyoming and Montana, we’ve come to understand how special our home at the Flat Ranch is. While reading a Yellowstone trail guide book, we read of a certain hike that stated, “and if you’re lucky, you might even be able to see a sandhill crane!” We chuckled at this highlight, seeing as the Flat Ranch is home to a plethora of sandhill cranes that we see practically each day we’re at work. To experience the rich diversity of plants and wildlife this area has to offer, we certainly don’t have to leave our workplace.

Along the way, even as we’ve grown to feel like seasoned Flat Ranch interns, we’ve learned to expect the unexpected. We have found ourselves in such adventurous situations as driving the ATV through a hail storm, hiking many miles in hip waders, and nearly losing our rubber boots in waist-deep muck.

By the end of August, both of us will have departed Idaho and moved on to our next chapters. On the one hand, our now-extensive knowledge of ranch work and the Rocky Mountain ecosystem seems a little less useful in our lives on the East Coast. However, we will continue to carry with us the increased capacity for problem-solving, teamwork, and most importantly, love for this area of the West that we gained this summer (not to mention the ripped jeans and stained and faded outerwear). Guess we’ll just have to invest in copies of Noxious Weeds of Virginia and Plants of the Appalachian Mountains to tide us over until the next Western adventure.
Posted by Unknown at 1:46 PM 1 comment: