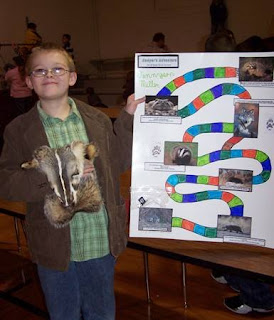 Idaho has the highest density of badgers on earth, but badgers are often in their dens (or digging new ones), and thus can be quite difficult to spot. Most people don’t think about badgers much. As the old saying goes: out of sight, out of mind.

That’s why badgers are lucky to have a new booster in Idaho Falls: Tennyson Miller (no relation), who has been spending the last few weeks learning badger facts for his school presentation.

After reading about my own badger encounter on Idaho Nature Notes, Tennyson and his mother contacted me and asked if I would serve as his “badger mentor.” Tennyson had many interesting questions about badgers, such as where best to find one (Snake River Birds of Prey area or the Owyhees would top the list), and which was more ferocious, a badger or a wolverine (I think a wolverine would win that match). We also discussed why Wisconsin is known as the “Badger State.” The truth is, Wisconsin derives its nickname (as well as the mascot for the University of Wisconsin), not from the animal, but because early lead miners in the region were known as "badgers”--because they did not have shelters, and had to live in tunnels they dug in the sides of hills. People would say the miners "lived like badgers." The name stuck, and that's what the nickname comes from. Wisconsin does indeed have badgers—but many less than Idaho.

Tennyson used this information—as well as a badger pelt from the Idaho Department of Fish and Game—to create “Badger’s Adventure,” a cool looking game that incorporates various badger facts: 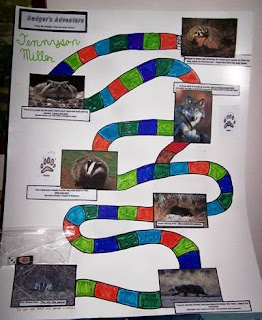 It is by now well known that young people are increasingly disconnected with the natural world. A recent Nature Conservancy sponsored study found nature recreation--including camping, fishing and hunting and national park visitation--has declined sharply since the 1980's. But I still believe that young people have an innate fascination with wild animals. Learning about these animals through school projects only strengthens that fascination. I am sure badgers will have a lifetime friend in Tennyson. Here’s wishing him many of his own “badger encounters” in the years to come. –Matt Miller 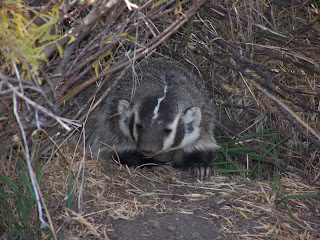 That's my Great Grandson ( in more ways than one!)
Grandma Gayle