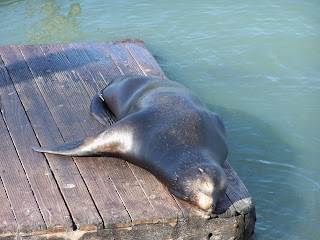 Who couldn't love a sea lion? Whether they're lounging around, or engaged in their entertaining antics, sea lions are known crowd pleasers. Last week at San Francisco's Pier 39, I saw tourists from around the world photograph, watch and laugh at these playful animals.

A bit farther to the north, in Washington and Oregon, the sea lions have not been receiving such a warm reception. Here, burgeoning numbers of the marine mammals gobble up increasing numbers of imperiled salmon. A single sea lion makes an incredibly effective salmon-munching machine, especially when the fish are momentarily stalled by dams, as they are on the Columbia River. Many Idahoans likewise harbor ill feelings about the sea lions, as the fish they eat are the same ones returning to Idaho's rivers to spawn.

Some sea lions have packed on hundreds of pounds on a salmon diet, as reported in an excellent article on this dilemma in the December 2007 issue of National Geographic Adventure. They can eat mind-boggling numbers of fish in a relatively short time. 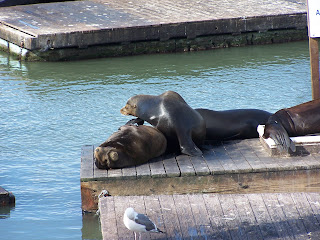 How could this be happening? In part, sea lions have increased dramatically in population over the past decades. The 1972 Marine Mammal Protection Act prohibited harming sea lions, and it worked.

The famous Pier 39 sea lions, in fact, were not even present twenty years ago. After the 1989 California earthquake, sea lions began showing up on the docks of San Francisco. Finding the calm environment to their liking--and not minding camera-wielding tourists one bit--they thrived. Today, there can be hundreds on the docks--a trend mirrored at other areas along the Pacific Coast. In the 1970's, their coastal population was around 50,000; today it is 300,000.

Last week, state officials in Washington and Oregon were given permission to kill sea lions that pose threats to salmon populations.

It is certain that sea lions are having an impact. But it's also important to remember a fact of conservation: Wildlife species (like salmon) that have healthy habitat are more able to withstand stresses (like sea lions). In a functioning, healthy ecosystem, species are resistant to factors like predation, non-native species, fire, flood and inclement weather. Thus, if salmon had fully functioning habitat, sea lions would likely not pose much of a threat.

It's the same for salmon (and sage grouse, and mule deer, and wolverines). That's why The Nature Conservancy recognizes the Pacific Salmon Ecosytem to be one of its highest overall conservation priorities. Salmon have complex conservation needs; fish hatched in small Central Idaho streams eventually migrate to the Pacific Ocean, and then return to Idaho to spawn a new generation of salmon. By working to protect habitat along their entire migration route, salmon can thrive--along with sea lions. --Matt Miller 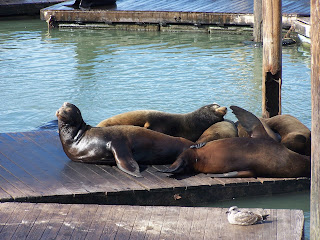