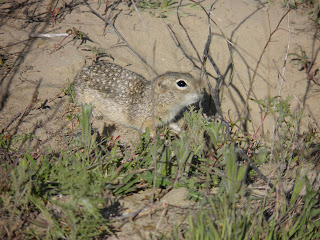 With much of southern Idaho in the grips of our usual heat wave, many of us find ways to cope: We head to the mountains, or turn up the air conditioning. We go to the water to swim or float. We try to spend our time outdoors in the late evening or early morning, when it's coolest.

Wild animals, of course, behave in similar ways to "beat the heat." Summer can be a taxing time for many critters.

Just it takes precious calories to stay warm in the winter, it can take calories to stay cool in the summer. Wildlife accomplish this in familiar ways: They seek shade during the heat of the day. They move into the high mountains. They take refuge on (or in) creeks and winters.

Or they go underground.

Many species of ground squirrels in southern Idaho disappear at this time of year. Think about it: Ground squirrels are highly visible in the spring in nearly every patch of sagebrush, farm field and meadow.

And then, they disappear. Poof.

The heat takes too much energy for the squirrels to survive. And so, for some species, they exist in a torpor underground. Their metabolism is lower and they exist in a "deep sleep" for periods of time. For some, they remain underground for eight months of the year.

For instance, take the Columbia ground squirrels so common around Silver Creek. They emerge in mid- to late-April. And then, in early July, they return to their burrows for a very long dormancy. Sometimes they reemerge for a short period in the autumn. Other times they don't re-emerge until April.

It boggles our human notions of time to imagine a species that is dormant for 8 or more months each year of its life.

Yellow-bellied marmots in the cool Idaho Rockies will remain active through the fall. In southern Idaho, many go into dormancy beginning in July.

And so, if you're feeling a bit lethargic in the heat, you can still feel productive compared to ground squirrels: They won't reemerge from their dens until next April!
Posted by TNC-Idaho at 2:12 PM