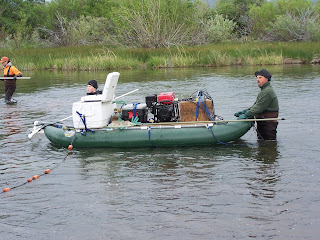 Note: This is the final part of Silver Creek Preserve intern Dominique Lucio's report on his summer internship with The Nature Conservancy (read part 1 and 2). We appreciate all the assistance that Dominique and other interns provide on the preserve. They're helping to ensure that it remains one of the great spring creeks of the West.

Maintenance
As I mentioned previously, it takes a lot of work to keep the Preserve running smoothly. As temperatures rose and constant spring showers soaked the valley, the Preserve’s trails quickly became overgrown with grasses and branches.

Though the work was thankfully divided between the four interns, there was plenty of grass to weed whack and branches to trim. Some trails were no longer even visible, and had to be repeatedly cleared over the summer.

As I became acquainted with the flora of the Preserve, it became increasingly obvious that several invasive species such as Canadian thistle, houndstongue, and yellow iris were outcompeting native species, and needed to be stopped. Luckily the Preserve hosted several volunteer spray days where people on foot and ATVs covered the nasty invaders with herbicides targeting the specific species.

Though these days were certainly invaluable, weed spraying was a constant. Fishermen frequently reported new patches of thistle to spray, and interns would respond in Tyvec suits and three gallon backpacks of herbicide.

Other summer-long projects included pulling up and disassembling (think sledgehammer) old wooden and barbed wire fences on the Preserve and at other Nature Conservancy properties such as the Flat Ranch and Soldier preserves. For two days I designed a stencil and painted The Nature Conservancy logo on the side of the Preserve’s several canoes.

One of the messiest and most hilarious projects I have ever worked on took place over the course of three days, in which three other interns and I dug up underwater patches of reeds and marsh grasses and transplanted them by the truckload to edges of the creek where the channel widens and heats up. By the end of each day we were completely drenched in mud and exhausted beyond caring about appearances, but we felt proud to have helped narrow the stream and hopefully better conditions for the wildlife.

Public Relations
The aspect of the internship I most dreaded at the beginning of the summer, public relations, turned out to be one of the most fun.

I greatly enjoyed accompanying different groups on canoe floats down the creek, from children with disabilities to Nature Conservancy employees from across the country.

I was also able to help with staff retreat work days and a ladies’ appreciation day held at Stalker Cabin. It was at the visitor center that I met the most fishermen, learned the most about the local wildlife, and heard wild stories of moose sightings, midnight fishing, and canoe mishaps.

These interactions really gave me a sense of the Preserve’s importance to several diverse groups throughout the state.

Conclusion
This summer was one of the best and most educational of my life. Working with Dayna Gross and the interns, as well as the volunteers and in-town office members, was the best work experience I have encountered thus far in my developing environmental science career.

Though I regret to say I never got around to fly fishing, I feel like I more than made up for it with bird watching enthusiasm. Never before have I seen such numbers and variety of birds as I did at Silver Creek, from tiny sora and hummingbirds to massive great horned owls, harriers, and Swainson’s hawks.

Most of all I would like to thank Jack and Sara Blumenstein for setting up and continuing to support the internship.

The opportunity to spend a summer so imbedded in nature is the perfect way to introduce people to Charlie’s passion. I am extremely grateful to the Blumenstein family for funding this amazing opportunity, and would strongly recommend the internship to anyone interested in working on the beautiful preserve and meeting so many great people.
Posted by TNC-Idaho at 11:53 AM