Redband: Trout of the Desert

The above video by the Ted Trueblood Chapter of Trout Unlimited provides an excellent introduction to the redband trout of Idaho's high deserts.

Redband trout are still abundant in a number of streams and rivers in the Owyhee Canyonlands of southwest Idaho. They have been spared the introduction of non-native trout stocks largely due to warm water. 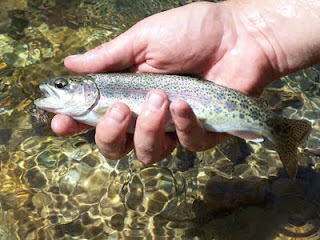 It was originally thought that desert redbands could thrive in much higher water temperatures. As the video above notes, this may not have been a correct assumption. It seems that redbands know and congregate in cold water refuges in these desert rivers--enabling them to survive in what must be a hostile environment for trout.

As such, protecting cold water refuges will be key to ensuring their survival.

There is another threat. While brown trout and hatchery rainbows can't survive higher water temperatures, smallmouth bass can. They have been introduced to Owyhee Reservoir, and already have displaces native trout in the Owyhee River. Hopefully, they can be prevented from spreading to other waterways in the Owyhees.

The Nature Conservancy has been actively involved in Owyhee Canyonlands conservation efforts for more than 15 years. The Owyhee Initiative, a collaborative effort that led to the first wilderness in Idaho in 29 years, includes provisions for protection of the special native wildlife found in Idaho's sagebrush country.

One of the recent successes of the initiative was the purchase of three land parcels that will allow direct access to two new wilderness areas, Jacks Creek and the North Fork of the Owyhee River. Both of these canyon rivers contain redband trout, and are open for fishing. You can reach these wilderness areas by passenger car directly from the Owyhee Backcountry Byway.

Fishing in the desert seldom yields large fish, but it's a unique experience for anglers who enjoy exploring new terrain and catching new varieties of fish. 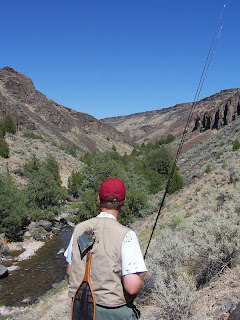