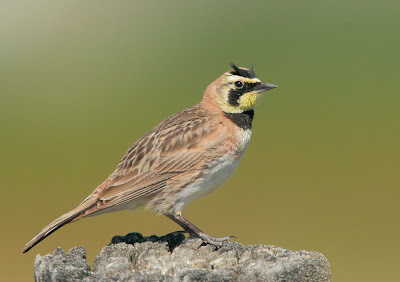 I saw the first horned larks of the year yesterday (along with migrating sandhill cranes and snow geese), on grassy flat areas of the Boise Foothills.

I see horned larks fairly frequently around southern Idaho. They're a bird of open ground, so they prefer areas without much cover.

Like many grassland birds, horned larks are in decline over much of their range. This is due to a variety of factor, including the dramatic loss of prairie habitat. These birds are also one of the species most likely to be killed by wind turbines.

I have not seen any studies suggesting this, but I think it would be worthy research. Oftentimes, conservation in our altered world presents many interesting dilemmas.

This is undoubtedly another instance where birders and citizen-conservationists can help researchers in tracking where horned larks are now living, and whether they are utilizing new habitats.

So keep an eye out for horned larks this spring. They're a distinctive bird and well worth searching for on your next outing.--Matt Miller

I too have been hiking in the Boise foothills in the last couple of weeks and I've been enjoying the Horned Larks. There seem to be pretty good numbers of them this year. I haven't seen the Burrowing Owls yet, but I expect them any day now.

Great picture and post. We have 1000's of horned larks here east of Rexburg that winter here. Our Trumpeter swans and pintails are just arriving. They are awesome to see.