Leave It (Mostly) To Beaver 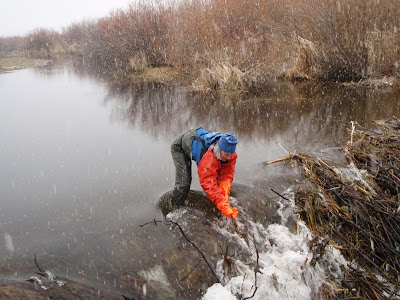 Now that spring has arrived at the Silver Creek Preserve, we are starting to get “as busy as beavers."

And one of the matters we have turned our attention to is...beavers!

The beaver, Castor canadensis, is listed in my Peterson Field Guide under “Some Odd Mammals”, and they most certainly are!

This very large rodent, (up to 60 pounds or more), is surely unique, with its familiar paddle-shaped tail, huge front teeth, and webbed hind feet.

Their presence in Silver Creek and some tributaries is evidenced by the gnawed willows, water birch, and aspens at the water’s edge. Besides using these woody materials as a winter food source, sticks are employed in the construction of dams.

Beaver dams, and the ponds they create, can have many beneficial effects in stream ecosystems. The increased wetland area provides more habitat for shorebirds and waterfowl. Ponds can act to trap silt, minimize erosion, and slow run-off. There is a stabilizing effect on flows throughout the season, as more water is held back for lower-flow summer and drought periods, and groundwater is recharged.

But there can sometimes also be undesirable consequences. In the spring, precipitation, snowmelt, and a high water table can combine with the increased water-holding capacity of a beaver pond to create flooding .

This can have a negative effect when it interferes with roads, cropland, and grazing areas.

Such has been the case lately at Stalker Creek, requiring that we take action to restore an optimum balance. During the first week of April, Dayna Gross and Ginny Glasscock breeched a small section of this dam by manually removing sticks and mud.

The goal was to increase the flow enough to mitigate flooding of fields and an access road, while maintaining the natural function and appearance of the dam. We were able to get a true appreciation of the beavers’ engineering skills as we yanked, pulled, heaved, and scraped away the materials that were so meticulously crafted into this amazing structure.

Water started flowing through our small break, and lower upstream levels were observed almost immediately. We did not note any fresh tree cuttings in the vicinity of the dam, or any other signs that beaver were currently active nearby. A week- and a-half later, water levels are holding within the desired range, with no rebuilding of the dam evident.

We will continue to monitor the effects of beaver dams throughout the season, and apply a light hand, as needed, to maintain equilibrium in water levels.

Besides manual breeching, The Nature Conservancy has also used water levelers, which are various types of pipe set within or below beaver dams to allow a certain amount of continual water flow.

In the end, we aim in our function as land stewards to protect certain human activities while supporting the role of the beaver, nature’s ultimate water conservationist.--Ginny Glasscock
Posted by TNC-Idaho at 2:09 PM