Drummer in the Woods 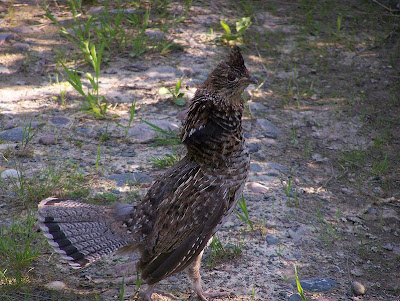 The ruffed grouse's spring-time drumming is something you almost feel before you hear. It's a low thumping sound, almost like an engine starting. (Listen)

This is the male grouse's way of attracting females. While the sound is often incorrectly described as the feather's hitting the grouse's chest, the noise is actually produced by the wings flapping the air.

Unlike sage and sharp-tailed grouse, ruffed grouse display individually. Ruffed grouse are birds of the forest, so the male usually stands on a large, fallen log to drum, so that it can see in all directions.

Count yourself lucky if you are able to actually see a ruffed grouse drumming. They're wary birds, and more difficult to find than grouse that prefer open country. Instead, listen carefully the next time you're in Idaho's forests, and you may be rewarded with the sound of spring's drummer.

Where to hear ruffed grouse drumming: Ruffed grouse can often be found in forested areas that have a mix of habitats, particularly near streams.

The working forests of northern Idaho are great ruffed grouse habitat, such as in the Kootenai Valley near Bonners Ferry. In that valley, the forested areas of the Conservancy's Ball Creek Ranch Preserve, the Kootenai National Wildlife Refuge and the Boundary Creek Wildlife Management Area all contain good numbers of grouse.

The forested reaches of Hells Canyon and the South Fork of the Snake River are two other good places to check out.--Matt Miller
Posted by TNC-Idaho at 11:36 AM