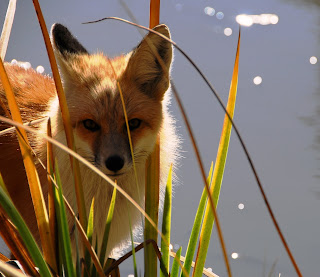 My friend and fellow outdoor enthusiast Phares Book sent me this great photo of a red fox he took along the Boise River.

Red fox are not an uncommon sight at this time of year: patrolling for mice along the Boise Greenbelt, trotting through downtown Ketchum, darting along the edges of farm fields across the state.

This wasn't always the case.

The red fox (Vulpes vulpes) has the widest range of any terrestrial carnivore on earth, being found in North Africa, across North America (including Alaska and Canada) and throughout much of Europe and Asia. Red fox were also introduced to Australia, where they quickly spread, devastating native marsupials and birds.

A common belief is that the red fox is not native to Idaho, and there are some who maintain it is not even native to the United States. This idea stems from the fact that English emigrants did import foxes for the British sport of fox hunting. And foxes don't seem to appear in natural history accounts of early explorers.

However, archaeological digs in Idaho have found red fox bones that are thousands of years old, predating European settlement by a long shot.

What is certain, though, is this: The red fox was never a very common animal in pre-Columbian North America. It was a rare species, perhaps clinging precariously to existence on a continent dominated by wolves and other large predators.

Doubtless the stocking of foxes by Europeans helped speed their spread. So too did fox escapes from fur farms over the years. And the red fox is one of those animals that thrives with civilization. Farms, woodlots and suburbs provide the perfect habitat for them.

The red fox is a frequent character in myths, stories and fables--often playing the part of a sly trickster. As with so many animals of legend, there's a lot of truth in the fictional fox. Indeed, it takes a wily predator to survive the bewildering maze of roads, pets and other hazards that many a red fox negotiates every day. --Matt Miller
Posted by TNC-Idaho at 9:45 AM

That is an excellent photo and great info to go along with it.

As a new resident to Idaho and living in Boise's north end, I was astonished last night to see a fox crossing the street in front of my headlights and continuing down the sidewalk past my car. It the closest view I've ever had of a fox. It's nice to know they and we are able to live in such proximity.

Fran, thanks for the comment. Just a week ago, I saw a red fox prowling around a very developed section of the North End at night. They are very adaptable animals and it's nice to see them around Boise (and many other Idaho communities).

Was so glad to find this article, as I had just seen a red fox along a canal in Boise. It looked very well fed too! Thanks for this interesting information.