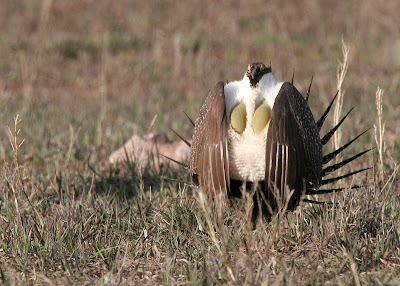 They appear like ghosts before light: small groups of plump, puffy birds standing amongst the sagebrush.

At first, I count ten, then a few more appear. Soon fifty male grouse begin their daily dance, strutting and puffing and popping the air sacs on their breasts.

The annual sage grouse strut is one of the West’s most memorable wildlife spectacles. Each year, the male grouse return to their display grounds—called leks—to give their courtship display to females. The females check out the ostentatious display and pick a mate.

Unfortunately, this is a sight becoming increasingly rare across the West. Where once thousands of grouse flew, there are now hundreds. Where there were hundreds, there are now dozens. And in many places, sage grouse are completely gone.

What happened to the grouse? And is there any way to stop this disturbing trend? 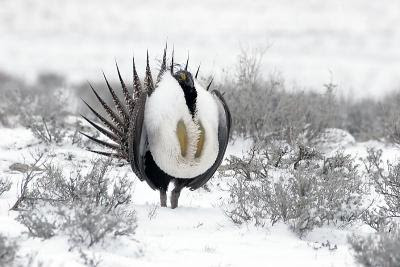 The Not-So-Endless Sage
When European settlers traveled the Oregon Trail, the sagebrush deserts seemed endless and unforgiving. Today, driving the interstate through southern Idaho and Oregon, it might seem similar, as if the sagebrush plains go on forever.

A closer examination reveals much has changed.

Healthy sagebrush habitat is actually not just sagebrush but a rich mosaic of other shrubs, grasses and wildflowers.

It is common to hear people to refer to sagebrush as “barren” or “empty,” this is simply not the case. In fact, a wide variety of creatures rely on sagebrush to survive.

It’s a very nutritious plant for mule deer and pronghorn. Many bird species survive only in sagebrush, including the aptly named sage sparrow and sage thrasher. There are even spiders found only in sagebrush.

And then there’s the sage grouse. Nearly every phase of the grouse’s life relies on sagebrush.

They eat it, they nest in it, hide in it, seek cover during the winter under big sagebrush’s branches.

And we are losing sagebrush, across the West. For years, sagebrush was considered a nuisance plant, and range managers burned it, sprayed it and knocked it over by dragging chains across the desert.

Today, the loss continues. In part, this is due to the development of habitat for agriculture, energy and housing. But another loss is more subtle, and perhaps even more of a threat. 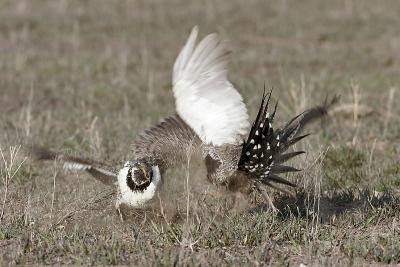 Fire in the Brush
Over the years, many conservationists have come to appreciate the role of fire in forests. Fire is often necessary to maintain the health of that ecosystem. When the Yellowstone fire raged, many predicted that the park would never recover—a prediction that quickly was proven inaccurate.

Given this, why are land manager so concerned about fire in sagebrush country?

Fire is indeed a natural aspect of sagebrush habitat. However, in most places, fire historically has burned infrequently, only every 50 to 75 years.

This starts a cycle where the cheatgrass burns much more frequently than the native plants. The sagebrush doesn't have a chance. After several burns, it never recovers. This leaves the monocultures of cheatgrass so common on too many western hillsides.

When that happens, the sage grouse disappear. 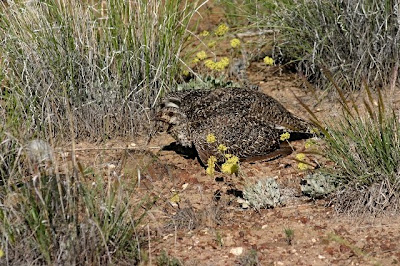 Hope for Grouse
Fortunately, there are still places where grouse still strut. Southern Idaho remains a stronghold for the species. Ensuring that these birds and their habitat continues to thrive is much less expensive than trying to restore grouse when they disappear.

Around southern Idaho, sage grouse working groups have formed to protect and restore habitat. These groups consist of conservationists, sportsmen, ranchers and agency officials. Their work is in part motivated by a desire to keep the grouse off the endangered species list.

In many parts of the state, these groups are funding the control of weeds and restoration of native plants.

The Nature Conservancy considers the protection of sagebrush habitat one of its highest priorities in Idaho. From the Owyhees of southwestern Idaho to the Craters of the Moon/Pioneer Mountains region, the Conservancy works with partners to make sure the highest quality sagebrush remains intact for grouse and other species that need it to survive.

One notable example is the Crooked Creek Valley, located 20 miles from the small town of Dubois in eastern Idaho. Local falconers, who hunt with raptors, first alerted the Conservancy about this area.

The sage grouse is a favorite quarry of falconers. The falconers knew the Crooked Creek area had some of the strongest remaining sage grouse populations anywhere in the West.

Today, the Conservancy owns 5000 acres in the valley, and also work on 60,000 acres of grazing allotments. Since 2001, work with partners has restored both sagebrush and stream habitat. And the grouse continue to thrive. 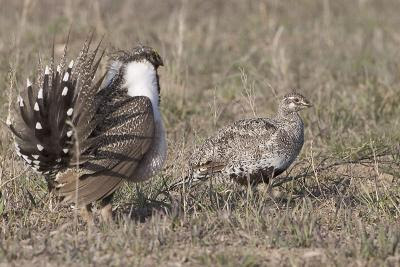 See The Sage Grouse Strut
You can see dozens of grouse strutting at Crooked Creek each spring.

Dubois Grouse Days offers tours to see the birds on their display grounds. This year’s event takes place on April 27 and 28 in the town of Dubois, and includes not only the grouse tours, but educational talks, great food and camaraderie with other grouse enthusiasts.

The video below was taken during last year's Grouse Days by conservationist Jean Bjerke. It gives a good idea of what you can expect to see.

It’s worth the trip. Enjoy the show. The more people appreciate sage grouse—and sagebrush—the more likely it is that these special birds will remain a part of our wildlife heritage.--Matt Miller

Photos: Sage grouse hen with brood by Ken Miracle; all other sage grouse images by Bob Griffith. Grouse days video by Jean Bjerke.
Posted by TNC-Idaho at 9:37 AM

I can hardly wait until the first of April when I can get on a lek to see the dance.

New to the site, and new to wanting to view these fantastic birds! We are too late for the event, Dubois Sage Grouse Days, April 2014. We are wondering if it would be possible to see these birds still, it's May 7, 2014. We would like directions. My husband and I are seniors, not hunters, but bird watchers. Please email information to me at memmaydamon@gmail.com if you can help us. Thanks! xx