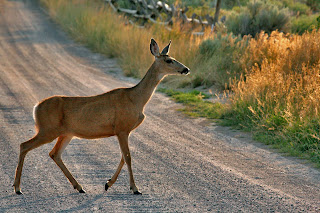 An unpleasant fact of life, a safety hazard, a good topic for humor? When it comes to dead wildlife on the road, we often don't know how to respond.

Consider the long list of tacky roadkill products--from cookbooks to theme restaurants to t-shirts.
And yet, most of us know that hitting a deer or moose is not a joke. More than 200 people each year are killed in such collisions.
Roadkill also represents another major threat: the threat to wildlife populations. Roads cut off migration routes, and kill large numbers of large mammals each year.
There is hope. The Nature Conservancy is working to protect wildlife habitat--keeping large mammals in the forest and off the highway--in places like the Greater Yellowstone ecosystem and North Idaho.
Other efforts, like the Freedom to Roam campaign, seek to protect vital migration corridors and to install wildlife-friendly road devices.
Read the latest installment of our column, A Natural Perspective, to learn what you can do to protect people and nature from the very real--and very unfunny--risks posed by wildlife-vehicle collisions.
Posted by TNC-Idaho at 1:30 PM