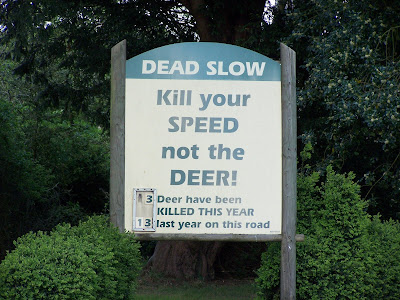 Idaho has many large mammal species with large home ranges, and increasingly, their migrations and movements put them onto roads at some point during the year.

Roads obviously aren't going away. But there are ways we can reduce the number of animals killed on the highways.

The ubiquitous "deer signs" around the state and country do not reduce road kill. As explained in Tom Vanderbilt's Traffic: Why We Drive the Way We Do, we see those signs so many times that they don't register.

Perhaps signs like the one above (located near Woburn in rural England) could have more affect on certain roads. I think that if such signs were posted on Highway 21 near Boise and Highway 95 near MacArthur Lake in North Idaho, it would be eye opening for many--and could very well convince people to slow down.

Wildlife overpasses and underpasses have proven very effective in places like Banff and Jasper national parks in Canada. Such projects may be expensive, but so too are the insurance costs and risks to life associated with collisions with elk and moose.

And such wildlife crossings work--check out Patagonia's excellent videos for examples.

Idaho still has populations of migrating, wide-ranging mammals. Conservationists must find creative solutions to get those species across roads. We know what works: a combination of passageways, new signage, fencing and habitat protection. Now we just need widespread support to protect wildlife--and people--on the roads.--Matt Miller
Posted by TNC-Idaho at 9:56 AM