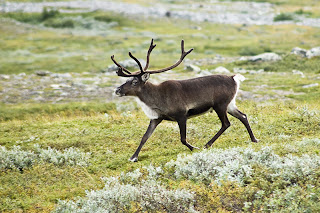 Rudolph-the-Red-Nosed Reindeer versus Bambi: It sounds like a bad episode of Celebrity Deathmatch, a warped holiday special pitting the world's two most famous antlered creatures. Fortunately, trademarks and licensing agreements will prevent this spectacle from ever being aired.

Unfortunately, a struggle between the real-life counterparts of Rudolph (caribou) and Bambi (white-tailed deer) is playing out right now in North Idaho. How will it be resolved?

The Rudolph of the popular song and television special is a particularly resourceful individual--overcoming his friends' disrespect and (in the tv show) the formidable Abominable Snowmonster to lead Santa's sleigh and rescue misfit toys. But Rudolph's wild counterparts--the caribou--are facing problems much more serious than red noses. Or, for that matter, snowmonsters.

Caribou are specialists. They thrive on the tundra, eating lichen and migrating long distances to access the best grazing. Climate change is tough on caribou, as are roads that criss-cross the country for oil drilling. But the tundra caribou's life is still a holiday party compared to the southern Selkirk herd of woodland caribou.

This herd roams into the northern Idaho Panhandle (as well as eastern Washington and British Columbia). Tundra is in short supply here, but the woodland caribou here eats lichens off old-growth trees. It's a specialized niche--and one that has left the caribou vulnerable.

With logging of old-growth trees and associated roads, the caribou has lost a lot of habitat. Estimates vary, but as few as 35 may survive in this herd. Even less--as low as three in some years--still roam into Idaho. It's by far the rarest large mammal in the "lower 48."

The future for caribou is not rosy. In fact, it's been even less so since the explosion of another member of the deer family. 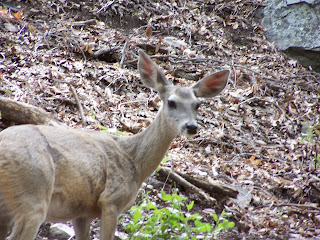 We all know what mayhem ensues for Bambi and friends when it's announced, ominously, that "man has entered the forest." But for the real "Bambi"--white-tailed deer-- fires and hunting have been something less than scary. True, for a time, with unregulated hunting and rapid habitat loss, white-tail deer populations did indeed plummet. Then came hunting regulations. Suddenly "Bambi" found a whole new world--a world that, from a deer's perspective, resembles paradise. Plenty of edge habitat, new-growth forests, woodlots, yards, farms and suburbs--all provided the perfect food and cover for the wary, adaptable whitetail. Being close to humans proved no worry given the plentiful supply of corn, grass and cover.

So whitetails have prospered. And prospered. Today, there are more than 35 million whitetails--a number certainly higher than what existed when Columbus landed in the New World. In many eastern forests, they have done so well, they have stripped the forests of habitat for songbirds and other species. The damage to agriculture-and to automobiles--is considerable.

And the white-tailed deer is on the march, expanding its range across the country.

This species has long been a part of the Idaho Panhandle, but at much lower numbers. The logging and habitat change that has impacted the caribou has proven a boon for whitetails. The brushy undergrowth that springs up is perfect for deer.

Like elsewhere, they have thrived. And here's where things get worse for the caribou. With the explosion of whitetails has come a marked increase in mountain lions. Caribou prefer open country--tundra, or the more open forest of old-growth--where they can see predators at a distance. The brushy habitat where lions lurk for deer thus makes the caribou vulnerable to ambush. The lion finds the remaining caribou easy pickings.

As such, caribou are suffering high mortality due to lion predation. And it's all because the lions have ample white-tailed deer to support a high population.

I've noticed with the whitetail population boom has come an almost predictable disgust with the species. I've seen them referred to in print as white-tailed rats and land carp. But is that fair? After all, the whitetail has merely adapted to humanity's habitat changes. Shouldn't we be happy that some wildlife species can survive in our cities, our suburbs, our agriculture landscapes?

Species like white-tailed deer--and Canada geese, red fox, cockroaches, coyotes, pigeons--merely take advantage of new habitats we have created. Since these new habitats--the small woodlands, the city parks, the suburban yards--are not going away, we should find a way to appreciate and live with these creatures.
For conservationists, the real question is this: Do we want a world that is only populated by the most adaptable creatures--a world of whitetails and pigeons? In such a world, we would have skunks and squirrels, but no grizzlies, no pronghorns, no pine martens, no sage grouse. And no caribou. Such a world seems incredibly lonely, and bleak.
If we indeed value wildlife like the caribou--beyond cartoon caricatures--we need to find ways to protect their habitat, to preserve their unique places, to conserve the big spaces where wildness and the full range of natural processes still can occur.

The white-tailed deer is here to stay on humanity's future journey. But the time is now to decide if that journey will also include animals like the caribou. --Matt Miller
Posted by TNC-Idaho at 12:18 PM